Australia's presidency of the UN Security Council is an opportunity for the government to support the women, peace and security agenda in Syria, writes Laura Shepherd. 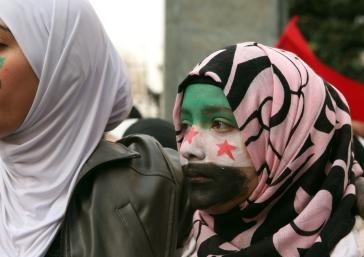 OPINION: In June of this year, Australia made a public commitment to use the presidency of the UN Security Council to focus on the 'Women, Peace and Security' (WPS) agenda.

But with the transition of leadership from Gillard to Rudd and the imminent federal elections the government has back-tracked from making this agenda the 'key priority' it was once set to be. However, we should not give up on progressing the WPS agenda at the Council in September, especially given Kevin Rudd's suggestion yesterday that he is considering a Presidential statement on the situation in Syria.

Australia takes up the presidency of the UN Security Council in September for a month. The presidency rotates alphabetically through the Council members, and offers a unique opportunity to influence the agenda of the Security Council for the duration. It was indicated by Foreign Minister Bob Carr that Australia would focus on women's leadership in peacebuilding and participation in peace governance during the presidency. These commitments were made in the light of strong Australian support for the WPS agenda at the UN, which focuses on three 'pillars' of prevention (of violence and the derogation of rights); protection (from violence); and participation (in peacebuilding and post-conflict reconstruction).

The Australian government will maintain some of its commitment to the WPS agenda, with an event organised for September 6 bringing together women involved in peacebuilding activities across the world, with UN and civil society experts, to discuss enhancing women's representation in peace negotiations and post-conflict peacebuilding and recovery.

Crucially, as indicated by Prime Minister Rudd  yesterday, it is also possible that Australia will use the presidency as a vehicle to intervene in the conflict in Syria. While presidential statements are not legally binding (unlike Security Council resolutions), they are still important texts in the eyes of the international community. In order to deliver on the promises made during the campaign for a seat on the Council, which heavily leveraged Australian commitment to the WPS agenda, the government must include strong language on all three pillars of the WPS agenda in the statement if it goes ahead.

Syrian women, including human right experts, lawyers and civil society activists, have been fighting for peace and change in their state for over two years. Yet, their plan for a secular democratic constitution was not even received by Lakhmar Brahami, the UN-Arab League Special Envoy. Australia has the capacity, as president of the UN Security Council, to insist that women's leadership is recognised in all discussions about governance in Syria and, further, to ensure the inclusion of women in peace negotiations and decision-making about security governance.

The conflict prevention pillar of the WPS agenda would be well served by the imposition of a UN-backed ceasefire in Syria. Further, controlling the flow of arms into the country, much of which is channeled from permanent members of the Security Council, will be challenging but entirely in keeping with Australia's commitment to reducing the number of weapons in circulation. Australia may need to risk taking a public stand against trade in arms to Syria in order to limit the harms that these weapons are perpetrating against civilians.

Finally, the WPS agenda in Syria requires that Australia uses the presidency - and the presidential statement, if one is forthcoming - to ensure not only the protection of women's bodies but of their rights. In establishing peace in Syria, women are systematically being excluded from consideration, as global media coverage reports, and thus perpetuates, the idea that the conflict can be explained in terms of the incumbent Syrian regime versus an organised resistance. Much disappears from view when the world is represented in such simplistic terms, including the women's organisations that are struggling to find a path to peace.

Australia made a commitment to the WPS agenda in campaigning for the seat on the Security Council; here is an opportunity for the government to translate its rhetoric to real action and stand up with, and in support of, women of the world.

Drone strikes and civilian protection: why Australia must take a stand

Good to have a seat at the table