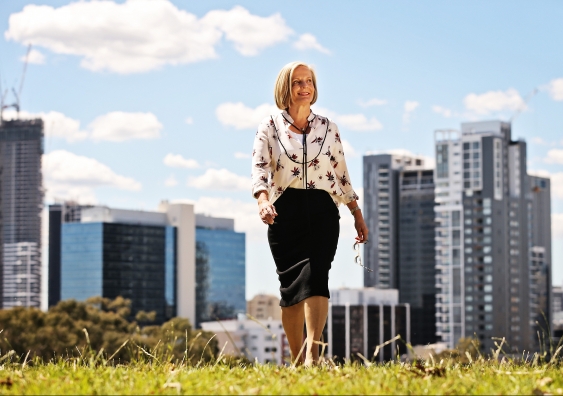 You have raised the idea of creating a third city for Sydney alongside the CBD and Parramatta, and locating it in the west. Why?

We need to break away from the traditional perception that the Sydney CBD is the centre of Sydney. The third-city model presents an interesting opportunity to reconceive what our notion of a city is. Certainly it is an area that functions off the benefit of agglomeration economics to ensure higher economic activity than would occur under dispersed growth. But also it is an area that, if planned right, can deliver significant livability and sustainability benefits.

Cities not only provide economies of scale, but also diversity, demand and variability. Australian cities already show us what is possible – culturally, economically and environmentally – using the city form. We now want to apply this same experience to western Sydney.

International experience shows that the modern airport, as an aerotropolis, can deliver significant economic growth for a region. We are taking that a step further and saying that the aerotropolis can also be a model for a new city.

We are using the new Western Sydney Airport, and associated infrastructure, to deliver a new city – and this is the lens through which we will approach future decisions about the west.

We see a particular opportunity to use the western city to deliver a greater diversity of housing options in the west, and also establish a clear Sydney home for our advanced manufacturing, robotics and logistics industries.

The western city will be different in that it will not be a ‘stand-alone’ city, but rather will harness the west’s string of pearls – Liverpool, Penrith, Campbelltown, Camden and Blacktown.

It will celebrate what’s best about the west – the wide, open spaces and waterways, the great lifestyle adjacent to the Blue Mountains, and the cultural diversity of the existing centres – while also delivering a new level of amenity for the west.

How will this planning vision address the most pressing problem of housing affordability?

Housing affordability is a significant challenge for global cities growing at the rate of Sydney. Our three-cities model is part of our response to this challenge. Envisioning Sydney as three cities – eastern (CBD), central (Parramatta) and western – will help improve livability across our city, but particularly in the west.

The three-cities model will give more people the opportunity to live within 30 minutes of where they work, study and play. By broadening the focus of Sydney, and increasing opportunity in the west, we are broadening the locations where development will be viable.

We can also look to how Japan Post is using iPads to empower the elderly or how Paris has created a cost-neutral bike sharing scheme.

We will also place a particular emphasis on the delivery, in each of the three cities, on a diversity of housing choice. Sometimes referred to as the “missing middle”, each of Sydney’s three cities is an opportunity to deliver a range of housing types to meet the varied needs of modern Sydneysiders. This includes apartments, terraces and mews-style housing. The three-cities model changes what is possible across Sydney.

From where have you drawn your inspiration?

Global cities around the world are faced by similar challenges to Sydney. For example, in London, through the Greater London Authority, we have seen the benefits that strong governance arrangements can bring. Since its re-establishment, London has been transformed:  so much investment in transport has been delivered along with well-coordinated, strong, land-use planning.  The city abounds with examples – from the redeveloped Olympic site, to Kings Cross Station, and the new cross-city rail – of what is possible when the planners and the transport engineers are allowed to work together.

I am also very interested in some of the technical innovations we are seeing around the world. This is not about technology for its own sake, but using technology to help make cities work better and improve quality of life.

In Sydney we have done well with our travel apps, making it easier to catch a train on time, but we can also look to how Japan Post is using iPads to empower the elderly or how Paris has created a cost-neutral, bike-sharing scheme that gets cars off the road. How cities approach autonomous vehicles will be the next big test, and a fantastic opportunity.

You are a champion of female-friendly cities. What are the measures that will make a city work for women?

Making sure the city is female friendly is a passion of mine. Not just because half the population is female  but also because ‘female friendliness’ is a great proxy for ensuring we consider the needs of others (e.g. the elderly, the young, the disabled and the socio-economically disadvantaged).

Other cities show how this thinking can work. For example, Vienna discovered that,  after the age of nine, the number of girls in Viennese public parks dropped off dramatically, while the number of boys held steady. The theory was boys were more likely to win out if there was competition for park space.

So the city planners in Vienna looked into how they could change park design to specifically encourage girls to continue to want to use, and feel safe in, the city’s parks. The dividends are clear to see for anyone who has visited Vienna – the city’s parklands are not just beautiful, but invite use and exhibit a distinct vibrancy brought about by the diversity of people using them.

Why do we need to make the gender distinction?

Gender plays a role in how people use the city. It is still a fact that women, overall, spend more time each day than men on tasks related to child care. Studies also regularly show that, for a variety of reasons, women are significantly higher users of public transport during certain parts of the day.

Transport planning, as part of city building, can, and should, respond to this. Car-sharing schemes are definitely one way to help with this. Sydney, in fact, leads the world in uptake of car sharing, a product of support from local government and some rationalised regulatory arrangements. So uptake is already fantastic, but we can do more. Part of this might be to understand what the barriers to female use of schemes might be such as safety, ease of access, and availability, and how they can be addressed.

Bike-sharing schemes are another example of how a city can offer extended services that could benefit women.  They are a great way to free up road space, improve public health and boost the local tourism offering.  It doesn’t even need to cost that much, with experience from cities such as Shanghai, Paris and London demonstrating schemes can be revenue positive.

Transport initiatives like the new Sydney Metro, Parramatta Light Rail and plans for a new rail link to the Western Sydney Airport are obvious game changers for the future development of Sydney. For example, in Parramatta alone, the government is spending more than $10 billion across the next 10 years on capital works. This type of investment is unprecedented.

Game changers don’t, however, have to just be physical structures or rolling stock. They can also be regulatory amendments or institutional arrangements too. One area I am especially interested in is what barriers exist to institutional investment in residential development (particularly long-term rental stock). Internationally, institutional investors such as superannuation funds play an important role in funding the development of a diversity of housing stock. This is not the case in Australia, and I think there is value in considering why.

Chief Commissioner of the Greater Sydney Commission, Lucy Turnbull AO, is an Adjunct Professor at UNSW’s Faculty of Built Environment.