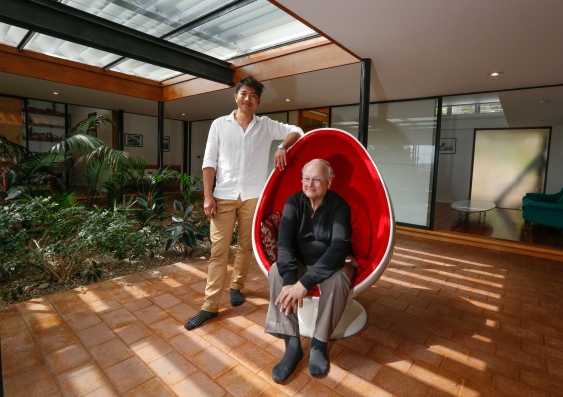 In 1978 architect Glenn Murcutt built Ockens House, an open-plan home on Sydney’s northern beaches. Thirty-seven years later the Pritzker Prize–winning Seidler Chair in the Practice of Architecture is guiding UNSW graduate and principal of Scale Architecture, Matt Chan, through its restoration. The friends, who graduated from UNSW 34 years apart, recently visited Ockens House, where Chan asked the renowned architect about his high-profile career and influences.

Matt: You’ve never followed the status quo with your work. As an architect, why is experimentation important to you?

Glenn: In my father’s last weeks of life, he said, “Son, where do you think you’ll go in this profession?” And I said, “Well, Dad, I want to be able to experiment.” He asked me where the money would come from and I said, “Well, I think one can do calculated experiments, incrementally.” And that’s what I did. In my first 10 years in practice, I built three new houses, but I did a hell of a lot of alterations and additions as well until I built up a vocabulary of what I knew I could do. My father raised me on Henry David Thoreau who said: “Since most of us are going to be doing ordinary things in our lives, the most important thing is to do those ordinary things extraordinarily well.” The greatest attribute an architect can have is to stand back and criticise his or her work. However, I wouldn’t necessarily call what I do “experimentation” – I’ve just always done what I think is logical. When I first graduated everyone was thinking about air conditioning, but I was more interested in how to orientate a building to achieve cooling and ventilation. For me, buildings aren’t just objects in the landscape. If you think of a composer creating a music score, there’s the conductor, musicians and the audience. Well, for me the building is the instrument, it provides the openings and the sound, nature is the composition and I am the audience.

Teaching makes a good architect a better architect, because you need to articulate ideas with clarity.

Matt: It seems to me there aren’t enough architects who teach. How important has teaching been in the development of your career?

Glenn: Teaching is an incredibly important part of my career. For the 46 years I’ve been in practice, I’ve taught for at least 38 of those. Teaching makes a good architect a better architect, because you need to articulate ideas with clarity. When you make a suggestion to a student, you must clarify why it’s so. Without that, it’s only a judgement. Uncle Max Harrison, an Aboriginal Elder and colleague, said: “You must give it away to keep it.” It sounds like an oxymoron – but you must give away ideas to keep them. And the giving is about the wish to give.

Matt: As a profession, architects have become very proficient at the delivery of buildings, perhaps to the detriment of the built environment. Are we giving enough time to design?

Glenn: Well, first of all, the profession decided our main role was that of designers and specifiers, and gave away the contract administration to a project manager. That was a total disaster. That’s taken the true role of architecture away because it’s during site inspections that you control what you’ve designed. I always say: “I’m not prepared to work with a project manager. I’m the project manager.” If you want to be in practice at the age of 79, it’s important that people still find you relevant.

Matt: What have been the biggest influences on your work?

Glenn: Music and nature were very big parts of family life when I was growing up in northern Sydney. There were seven pianos in our house. We had animals around us and lived in the bush. I developed a great love of native flora and fauna. We’d go out into the Colong Caves and the Kowmung River [in the Blue Mountains region] – it’s good to get a bit of eucalyptus in your blood. And then I discovered the Australian painter Fred Williams and he showed me how light separates elements in the Australian landscape. That was an absolute and personal revelation for me.

Matt: What is the most important advice you offer your students?

The restoration of Ockens House featured in Architecture by Hand and Mind an exhibition celebrating 60 years of graduate excellence at UNSW. This is an edited excerpt of a longer interview, which can be found here.