Public education and engagement with research can be improved using technology commonly found in computer games. 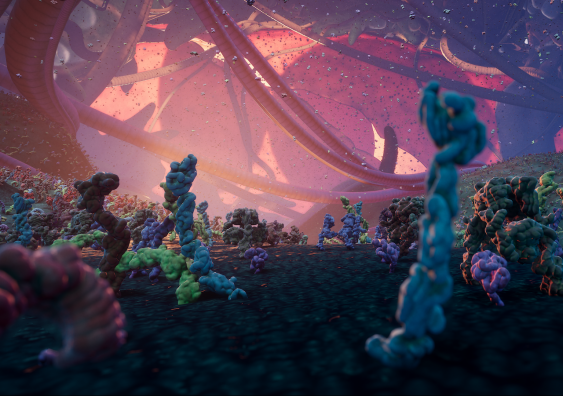 A UNSW researcher is revolutionising the accessibility of research using art and design-led modes of creation to visualise complex scientific and medical data.

Associate Professor John McGhee is a 3D computer artist and the Director of the 3D Visualisation Aesthetics Lab, an award-winning multi-disciplinary research lab at the School of Art & Design that specialises in 3D computer animation and visualisation.

The Lab creates immersive platforms that simulate scientific phenomena, such as drug interactions with cancerous cells, personalised scans of strokes to help patients understand their treatment, and educational 3D animations demonstrating the power of soap against COVID-19 particles.

“I want to help people make better sense of things with visually immersive experiences,” A/Prof. McGhee says. “We have such amazing 3D technologies, and we can use them to benefit the public’s understanding of the things that affect our lives.”

A/Prof. McGhee says while there’s a clear appetite for understanding scientific research that affects us, the complexity of information is often a barrier. Three-dimensional visualisations, however, can help make what is complex and raw more comprehensible.

“A lot of important scientific work in cancer, for example, can be quite abstract or caught up in the data,” he says. “But by using design to present the data in a way that is more tangible using contemporary media like virtual reality (VR) and 3D animation, it allows us to tell a unique story that everyone can make sense of.”

The A/Prof. recently won the inaugural Distinguished Research Award from the ARC Centre for Excellence in Convergent Bio-Nano Science and Technology. A/Prof. McGhee’s work was recognised for redefining the interface of immersive VR and science.

“It’s a predominantly science-based centre, so to win the award recognises the contribution art and design has in making sense of complicated problems like nanoparticle-based drug delivery, then trying to build outcomes that allow better access and understanding,” A/Prof. McGhee says.

But it’s not just about making the science look good. A/Prof. McGhee says the creative industries are in a unique position to offer innovative solutions to problems in their own right.

“As designers and artists, that is where we shine,” he says. “Our practice is really listening to all the stakeholders, looking at the data and then using our methods to consider problems in new ways, ask different questions, and challenge the way things are done.”

The Distinguished Research Award is just the latest in several accolades for A/Prof. McGhee and his team, including nominations for the 2020 Eureka Prize and the SIGGRAPH Asia Computer Animation Festival.

But it’s not a solo endeavour, the A/Prof. says.

“The work that we do in animation at the 3D Visualisation Aesthetics Lab, which is part of the new Arts, Design & Architecture faculty, is world-class” A/Prof. McGhee says.

“While I am the Lab’s Director it’s down to the PhD students, Post-Docs and professional staff, who are the ones that do the work, and I would like to recognise them as part of this award.”

A/Prof. McGhee says the recognition also highlights the developments within creative arts and digital making in developing and using cutting-edge technologies that have not previously been used together.

“We collaborate with colleagues engaged in cutting-edge research to create interactive media that brings to life the detail behind biomedical processes,” he says. “We’re the critical friend, working with the science community and their data, and we’re producing outcomes that have not been visually represented before.”

Inspiring the next generation

A/Prof. McGhee says design-led thinking is fundamental to solving the most pressing challenges. He says we need more artists and designers to be looking at problems from a visual perspective.

“When we’re in this world, whether it’s during a lockdown, or the rollout of a vaccine, whether it’s educating people to use hand hygiene, designers are critical in articulating this research and deploying solutions in a cultural environment, or an applied context in the world.” 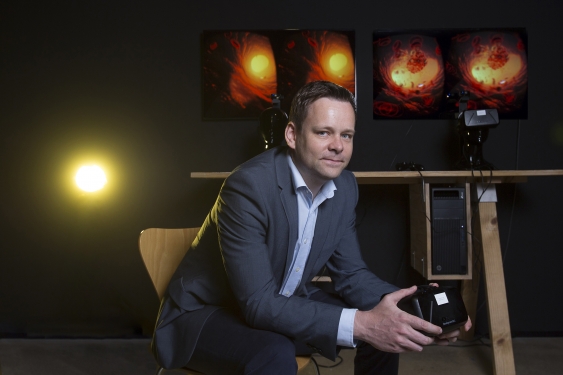 Public engagement with academia is more important than ever, he says.

“It’s one thing doing the research, but if you can’t talk about it and you can’t engage the wider public, we’re not going to get very far,” he says. “We have to roll our sleeves up and get out in the public domain and show the value of what we’re doing.”

In turn, A/Prof. McGhee hopes to inspire more young people to get involved in design and research.

“We’ve all had that moment where a teacher inspired us, or we had a eureka moment that pivoted us in a new direction,” he says.

“Engaging with schools and young people, showing them cool technology like VR headsets and things they’re used to seeing in video games applied to science could open up an opportunity for them to have their own eureka moment.”