Opinion Biennale comes of age with moments of curatorial brilliance

The Sydney Biennale is blossoming from a rebellious childhood into an engaging maturity that speaks volumes to audiences, writes Felicity Fenner. 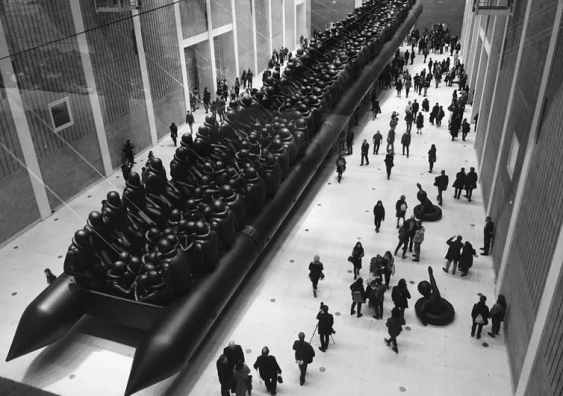 OPINION If a 21st birthday “coming of age” observance can be applied to cultural events, 2018 marks the launch into adulthood of the Biennale of Sydney. In some ways Sydney’s biennale was a precocious child, turning its back during infancy on mainstream Eurocentric art in favour of exploring its local geographic region early on, including substantial works from Australasian artists.

In other aspects it has failed to move with the times: despite the burgeoning since the 1990s of Indigenous and Asian art in Australia, this year’s 21st edition, incredibly, is the first to be wholly directed by a curator of non-Western heritage, Japanese curator Mami Kataoka.

Having taken 45 years to reach 21, however, the definition of “Western” has become almost meaningless in the context of a globalised art world oiled by data sharing and populated with itinerant artists and curators hopping around the globe between studio residencies and biennales. We can be everywhere, all the time.

It is a very different cultural environment to when Italian immigrant Franco Belgiorno-Nettis came up with the idea, and had the means, to stage a biennale in his new home of Sydney, which he recognised was crying out for an injection of foreign culture. The inspiration, of course, was the Venice Biennale. The world’s oldest and still most prestigious art exhibition began in 1895 and, some believe, was the inspiration for the launch of the modern Olympic Games the following year.

Sao Paulo followed with a biennale in the early 1950s, then Sydney joined the party in 1973. But it wasn’t until the 1990s that biennales were suddenly everywhere. Today there are over 100 biennales and triennales internationally, though most are only 10 or 20 years old – mere primary schoolers in biennale “dog” years.

A full two decades before Queensland Art Gallery initiated the Asia Pacific Triennial (1993), the first Sydney Biennale in 1973 drew half of its content from artists in Asia, none of whom had exhibited in Australia. The regional focus was continued in the following edition, while the third biennale in 1979 is now considered ground-breaking as the first art exhibition anywhere in the world to present Aboriginal culture in the context of contemporary art.

Given these prescient curatorial manoeuvres in the early days, it is astonishing that the board of the Sydney Biennale has never before entrusted the exhibition to an Asian or Indigenous Australian curator. Leading Asian and Aboriginal curators have served as curatorial advisors to biennale directors for over 40 years, and visionary curatorial decisions have been taken on the basis of that advice, but the responsibility (and credit) has always been carried on Caucasian shoulders. This can be partially attributed to the fact that long after we became a globalised society, cultural cringe persisted in the Australian art world, which despite proactive measures to promote itself on the global stage still remains a very small fish internationally.

As the third biennale to join the ranks of adulthood, after Venice and Sao Paulo, what can the 2018 Sydney Biennale contribute to the field of international art and exhibitions? Mami Kataoka oversees a modest 21st birthday celebration, with fewer artists and venues than recent editions. Whatever is lost in quantity is made up for in quality, with enough stand-out works to make for a memorable exhibition punctuated by moments of curatorial brilliance.

Kataoka’s skill as a curator is especially evident at Carriageworks, where her concept of superposition, drawn from quantum mechanics, is clearly articulated in art installations from very different parts of the world conversing fluently through shared themes of earthly transcendence.

A haunting video by Laurent Grasso, filmed with hyperspectral cameras and drones at Yuendumu in Central Australia, attempts to portray unseen forces in the landscape. Working in consultation with local Walpiri art-workers, the French-born Grasso renders a metaphysical desert landscape inhabited by floating spheres and other imagined phenomena. Wanting to avoid accusations of artistic arrogance or cultural appropriation, it is unlikely that a non-Indigenous Australian artist would proffer such a visualisation of numinosity in a quest to understand an essentially Indigenous spiritual connection to the land.

Sometimes it is the outsider who has the insight and assumes the authority to investigate alternative perspectives, yet Kataoka also invites views from the inside. Fifteen of 70 artists in the exhibition are from Australia, including many Indigenous artists. Adjacent to Grasso’s film is a new suite of paintings by senior Western Desert artist George Tjungurrayi. The paintings are installed both horizontally and vertically, offering two equally mesmerising perspectives of the land he depicts.

In science, superposition essentially refers to the presence of different forces in the universe reacting to and impacting upon each other. When applied to an art exhibition, it could be interpreted as the co-existence and confluence of different understandings and points of view.

While Semiconductor’s ambitious animation of seismic data is visually and aurally dominant, quieter works in this biennale sometimes better illustrate the curatorial concept. An example is Chen Shaoxiong’s The Views, also at Carriageworks. Projected onto large screens, the artist’s Chinese ink drawings of views from hospital windows were made as he lay dying in 2016. Like the experience of illness itself, these are slow-release images with flickering moments of animation rewarding the most patient of viewers.

Appropriately, Kataoka’s biennale makes a successful case for the strength of Asian art. Hong Kong’s Samson Young continues the theme of making visible the invisible at the Art Gallery of NSW. Young’s sound installation features a muted video of an orchestra playing Tchaikovsky’s 5th and in the foreground a collection of floor-based speakers emanating ambient sounds from the orchestra. While the work is a metaphor for “hearing” the other – the unspoken and overlooked – in its demand that the audience focus not on the contrived sound of the orchestra but on the ambient sounds of everyday, it recalls John Cage’s 4’33".

The imperative of a biennale is to capture the spirit of the times. Biennales might succeed as blockbuster crowd-pleasing exhibitions, yet their purpose is not to present a definitive survey exhibition, but to offer a window into the here and now. Without the benefit of hindsight, the curator of a biennale takes on an inherently risky brief.

According to the late Nick Waterlow, curator of three Sydney Biennales, a good curator must have “the ability to be uncertain”. His point was that curators bring works into dialogue with each other and we can never be certain what the outcome of that dialogue might be. But the exhibition must facilitate the co-existence in the same space of different viewpoints and understandings.

While this approach echoes the 2018 theme of superposition, unfortunately for Mami Kataoka the risk of staging dialogues with an uncertain outcome did not pay off in her much-hyped, sold-out discussion with Ai Weiwei at Sydney Opera House. Rather than providing the artist with a platform from which to speak about his recent experiences with refugees in Europe, and to expound upon his philosophical and activist-driven art practice, the questions kept turning back to the biennale itself, with even Ai Weiwei declaring the conversation “boring”.

While Ai Weiwei arguably has more to say about the state of the world than any other living artist, the most successful forum for doing so is not, it turns out, in conversation, but through his art. At Cockatoo Island, his oversized black lifeboat packed with more than 300 giants is a bold if pessimistic statement that embodies the scale and tragedy of the refugee crisis.

Weiwei’s film Human Flow premiered after the disappointing Opera House interview and, though not officially part of the Biennale, is a tour de force. Next to the lifeboat on Cockatoo Island, production snippets and stills from the film introduce the people and the stories that inspired the artist into action. In his fearless, insightful and deeply empathic portrayal of the biggest crisis challenging the modern world, Ai Weiwei does, after all, have the last word.

The Sydney Biennale continues until 11 June 2018.

Felicity Fenner is an Associate Professor at UNSW Art & Design at UNSW.

Retracing the Sydney Meridian: from early colony to contemporary Australia