The Maralinga atomic tests were devastating to life and land in Central Australia. Black Mist Burnt Country brings together dozens of artistic responses in a powerful, but somewhat incoherent memorial, writes Joanna Mendelssohn. 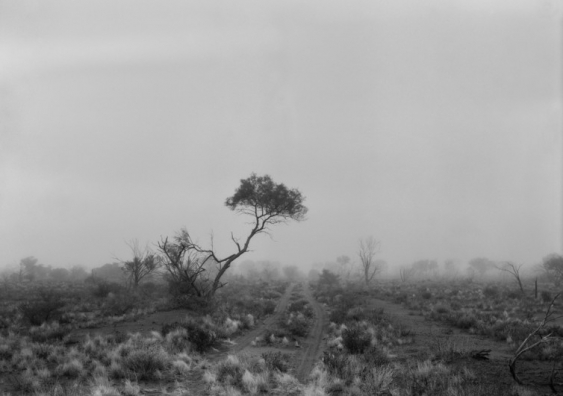 OPINION: Two drawings by Judy Watson make sense of it all. Bomb Drawing 1 and Bomb Drawing 5 are small shadows of light ash on the pages of a sketchbook. They seem so fragile, so small, so empty. Yet their very stillness in what is an often crowded and confused display gives them a sense of authority.

Black Mist Burnt Country is a national touring exhibition devised to commemorate one of the great crimes against this country – the wilful poisoning of the land and its people by the British Government with the active collusion of the Australian Government. The full extent of the British experiments with atomic weapons on Australian soil took decades to be fully exposed.

The nuclear tests took place over a number of years – starting at Monte Bello in 1952, rolling on to Emu Field and then Maralinga 60 years ago – yet it was not until the 1980s that a Royal Commission headed by James McClelland finally revealed the full extent of the poisoning of both land and people.

Despite the aggressive censorship of the media enough was known to trigger public unease at the time they took place. Many artists were among the protesters, some made work in response to the destruction of the land through nuclear explosions. One of the great surprises in Black Mist Burnt Country is a little known painting by Sidney Nolan, painted some time in the 1950s in response to the news of the nuclear tests.

Central Desert: Atomic Test takes as its base a classic Sidney Nolan desert landscape, rocky red mountains against a clear blue sky – but the land at the centre has been blighted and bleached while a mushroom cloud hovers in the sky. At the time he painted it Nolan was living in London, remembering how he had flown over the red land of the outback, imagining how it was being scarred by government intervention.

There were two groups who suffered most from the British nuclear tests. The British government seems to have regarded those involved in monitoring the tests as disposable as few precautions were taken for their safety. Not only did many of the military personnel involved suffer ill health and die young, but often their children were born with deformities, except for the ones who were stillborn.

The greatest number of victims however were the Anangu people. First they were driven from their land when it was handed over to the British, then they were poisoned by the black mist as it blew back onto them.

Jessie Boylan’s photographs show both sides to the consequences of this crime. In one, Avon Hudson, the former RAAF officer who publicly exposed the extent of British culpability and Australian complicity, sits in his study, surrounded by cardboard boxes. In the other Yami Lester, who as a child was blinded by the mist, stands staring into the sun with his sightless eyes. Lester also appears in Belinda Mason’s Maralinga, an alarming 3D lenticular holographic photograph, that focuses on Lester’s open unseeing eye.

Trevor Nickolls’ painting Revenge of the Stormboy shows the little children caught in the wild chaos of nuclear devastation, and the sense of anger the wider Aboriginal community feels about what happened to the Anangu people, whose land was so lightly taken away from them.

Some of the most moving paintings are by Jonathan Kumintjarra Brown, who was born at the Ooldea Mission but stolen and raised in Melbourne and Sydney. When he was an adult he found his family at Yalata, where the Anangu people had been moved because of the tests. His painting Maralinga has the truth of the land partly obliterated by the bombs while a lizard’s skeleton represents the loss of life.

Rosemary Laing’s One Dozen Considerations: Totem 1 – Emu shows the landscape of Maralinga, with its weathered stone marker indicating how long this land has been (and will be) poisoned. If there was any logic to the installation, or selection, it would hang near Adam Norton’s Prohibited Area, as Laing’s Totem 2 is a photograph of the original sign Norton mocked-up.

The failure to make this connection highlights the central problem of Black Mist Burnt Country. So many artists have made memorable pieces about this great crime, yet the curators have forgotten that a good exhibition is not simply a gathering of objects. An exhibition is a visual conversation between objects and images, but this has not happened here.

While I really enjoyed seeing once again Ian Howard’s Enola Gay, his 1975 rubbing of the plane that bombed Hiroshima, it does not fit either visually or conceptually in an exhibition about the nuclear tests of the Cold War. Overall the hang of the exhibition makes no sense, which is a shame as both the artists and the idea deserve better.

Black Mist Burnt Country is on display at the SH Ervin Gallery until October 30. It will then tour around Australia.