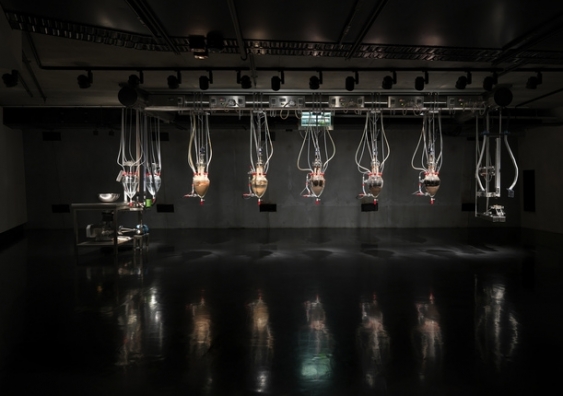 OPINION: I think it’s fair to say that I am fairly experienced in dealing with excrement. While some of this comes with caring for two small children, most of my faecal-awareness comes from first career as a veterinarian. In veterinary practice, the characteristics of faeces can give insight into a patient’s health or disease state which, at times, can contribute greatly to the whole clinical picture.

There’s the unique smell of a puppy suffering from parvovirus, (a condition some vets claim to be able to diagnose on smell alone), the tone and consistency of faeces when combined with upper vs lower gastrointestinal bleeding, the microscopic evaluation of intestinal parasites and finally, the arduous task of searching for one particular owner’s earring that was swallowed by the family dog two days prior…

Over the years I’ve seen (and smelt) a lot, but I’ve only seen a machine defaecate once - actual faeces made by a machine from actual food. Wim Delvoye’s Cloaca Professional (2010) was commissioned by David Walsh, owner of Tasmania’s Museum of Old and New Art (MONA) but this is just one version in a series created by the Belgian artist. Cloaca Original was completed in 2000 after eight years of discussions with various experts including gastroenterologists, biologists and plumbers and has been reincarnated several times over more than a decade with the collection now including versions such as, Cloaca - New & Improved, Cloaca Turbo, Cloaca Quattro, Cloaca N° 5, Personal Cloaca and MONA’s Cloaca Professional.

Each version of the Cloaca is built with the same concept that is, the machine consumes a meal at one end that is processed over time as it passes through a series of tubes and flasks. The temperature-controlled machine incorporates specific digestive enzymes, added with scientific accuracy at the appropriate points throughout the process with the resulting product being faeces, produced for the curious audience at exactly the advertised time.

In the depths of the iconic MONA I was excited to experience Cloaca Professional first hand. The room was quieter than I anticipated, and very, very still. I was told that defaecation was due to occur at 2pm and I was several minutes early (because, who knows, perhaps even machines can be caught short? And with just one motion per day, I did not want to miss it).

Others had the same thought obviously because there were already several small groups of people waiting when I arrived. Some had their arms folded, appearing defensive while others stood shifting their weight from foot to foot, not wanting to be present for any longer than absolutely necessary. Occasionally someone whispered something inaudible or let out a quiet, embarrassed snortle. Many held their nose, clearly offended by the inevitable odour. Everyone watched and waited.

At that moment, we strangers were united in anticipation. Then, with no warning the faecal receptacle started moving, in a circular motion, ready to catch the machine’s deposit. Then, in a smooth, Mr Whippy–type action, the motion is passed. The receptacle then stops, and people swiftly leave. Job done.

Through his Cloaca series Wim Delvoye has managed to create something truly interdisciplinary. A physical artwork that does more than just exist. It brings together biologists, medical experts, artists and public audiences in a common conversation.

This idea of inter-disciplinarity can be traced back to 1963 when C. P. Snow predicted a time where scientists and literary intellectuals would directly converse. This was a revolutionary idea that proposed an end to the traditional two culture divide and the emergence of a new, “Third Culture” that would close the gap between natural sciences and literary intellectuals.

He argued that the communication breakdown between humanities and science was a major hindrance to solving the world’s problems. His views sparked widespread debate at the time, yet, as an award winning novelist and physicist, Snow himself embodied this idea. He was the third culture, personified. Discussions around a third culture have endured and evolved greatly since Snow first presented his prediction.

Today, the diverse field of art-science has emerged as one of the strongest examples of a third culture, where scientists and artists collaborate to produce new knowledge together with the audiences with whom they engage.

As a visual science communicator, my work is situated both geographically and practically within both a medical research institution and an art and design school. In this sense, I can empathise with Snow and his provocative existence between two apparently dichotomous fields.

As a biomedically-trained artist, (former veterinarian and PhD in molecular biology) I am challenged but also fortunate to be able to contribute to the rich debate at the intersection of art and science. While my personal experience is by no means the only model of art-science production, biomedically-trained artists are a growing group of practitioners globally who can enable cross-disciplinary conversation to happen not just between individuals but also within individuals – themselves, giving a unique perspective on art-science collaborative projects and associated research.

Through his Cloaca series, Wim Delvoye seamlessly fuses science with art. Cloaca Professional is apparently the most hated exhibition at MONA, yet, it is also the piece that people spend the most time with. It is this conflict that provides enormous opportunity for public debate.

This is a perfect example where Snow’s Third Culture prediction has been realised. But, I can’t help but hope that Delvoye creates yet another version of the machine - a bio-version that incorporates some of the organic movement, textures and sounds associated with digestion.

A version that pushes some of the public debate toward the science side of the equation. A version where the focus is on the meso- and microscopic gastro-intestinal environment. A version that somehow incorporates molecular machines and the microbiome.

And, if it’s not pushing things too far… perhaps this proposed Meso-Micro Cloaca could also cope with a dietary challenge – in the ultimate digestive science experiment, wouldn’t it be great to be able to ‘see’ how different diets affect the digestive system and ultimately the resulting excrement?

Then again, since I was NOT one of those people who contributed to the ‘most hated exhibit’ statistic, it is possible that my view of what might make a great Cloaca is not overly representative of the majority of the population.

Shifting the field of view: science stories in virtual reality