Construction has slumped to its lowest level since 2010, and the US Fed remains divided on its next interest rate hike, writes Richard Holden. 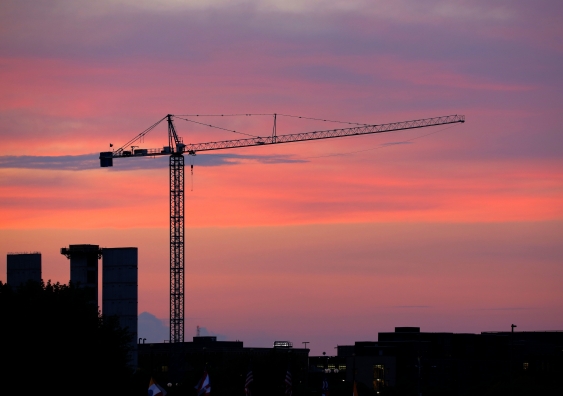 Construction is at its lowest level since 2010. This will surely factor in to upcoming RBA rate cut decisions, especially if they maintain their recent belief that prudential regulation has dampened concerns about property bubbles in Sydney and Melbourne.

In the US, the flash purchasing managers’ index rose to 53.5, well ahead of expectations. A reading above 50 indicates an expansion, so this was certainly good news for the US economy.

The US Federal Reserve minutes were keenly anticipated and pored over by market participants. Most reporting I saw focused on the following quotation:

“Most participants expressed a view that it could well become appropriate to raise the target range for the federal funds rate relatively soon, so long as incoming data provided some further evidence of continued progress toward the Committee’s objectives.”

That was interpreted as the Fed being quite likely to raise the Fed funds rate by 25 basis points at the December meeting.

Well, perhaps. Elsewhere in the minutes we got some insight into the data the Fed is looking for to prove it is meeting its objectives. The minutes noted:

“Although real GDP growth in the third quarter was appreciably above the slow pace of the first half, it had been boosted in part by transitory factors … Growth of consumer spending had slowed from its brisk pace earlier in the year, residential investment had fallen again, and business fixed investment had remained soft … Participants noted that economic growth in many foreign economies remained subdued, and that inflation rates abroad generally were still quite low. Some participants observed that important international downside risks remained … Participants expressed uncertainty about how long the [labor force] participation rate could be expected to continue rising.”

Translation: the labour market, consumer spending and inflation data better come in pretty strong for the Fed to hike. They copped a lot of criticism for what subsequently looked like a premature hike last December, and they won’t want to make the same mistake again.

It is also clear that there is a real division on the committee, with members in one camp gunning for a hike right away, and those in the other expressing cautious optimism. Fed Chair Janet Yellen is in the latter, and that matters. Whatever happens in December, the next set of minutes will be fascinating reading to gain further insight into how the two camps are interacting, and if there is any shift in group membership.

Vital Signs typically focuses on Australia, the US and China, plus whatever country is causing global economic trouble that week. This week we introduce a new feature, G20 country focus, where we pick a G20 country not regularly featured. This week: France.

The French economy, with GDP of US$2.5 trillion, is the ninth largest in the world (adjusting for purchasing power). GDP growth was a fairly anaemic 1.2% in 2015. Inflation in the year to October 2016 was a dangerously low 0.4%, with the economy risking a deflationary spiral.

In terms of public finances, France is running a budget deficit of 3.6% of GDP, although it has been steadily bouncing back from a level of double that since the financial crisis. Government debt to GDP is 96.1%, which is slightly above the Euro area average of 90.7%.

What should we make of those figures? Since France is a big and important part of the Euro area, and that area is struggling, is is not surprising that France is too. Almost all those figures are concerning – especially because France does not issue its own currency – but not at panic station levels.

Youth unemployment, however, is. Although there are European countries with worse levels (like Spain), having nearly a quarter of young people out of work can lead the social compact to be gravely stressed. First, there is the phenomenon of “hysteresis”, where being unemployed makes it hard to become re-employed. And that is particularly problematic in a rather inflexible labour market like France’s.

So even if the budget is slowly recovering, debt is manageable and growth is OK, having millions of disaffected youth roaming the streets is never a good idea.

Richard Holden is a Professor of Economics and PLuS Alliance Fellow, UNSW.