Opinion Dear Mr Trump: here’s how you build a wall

Donald Trump, if he takes the US presidency, will immediately start building a wall between Mexico and the US. What lessons can he take from those celebrated wall-builders, the Chinese? asks Xing Ruan. 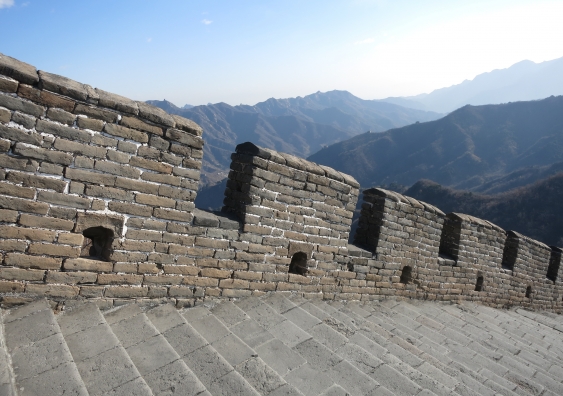 OPINION: Dear Mr Trump. As soon as you are inaugurated as the 45th president of the United States of America, I would dearly like to build for you and the American people the wall along the Mexican border. It will be, as you say, a beautiful wall.

Pundits may question the efficacy of a wall in achieving social segregation. But you know intrinsically, in this dark and turbulent age of terrorism, illegal immigrants and lawlessness, a wall will keep the unwanted vice and violence at bay, restoring peace and security in American society.

When building walls, our ancestors were terribly complacent. At about the same time – the Golden Age from approximately 600-500 BCE – both the wise mortals in the Mediterranean and the clever Chinese turned skyward: though they never managed to contact each other, they both found the simple predictability and geometric beauty of the cosmic world a panacea for the inclemency and toil of life on earth.

It should not be a surprise that both the Greco-Roman world and China barred themselves in walled compounds and courtyards so that they could lift their heads towards the heavens. The Chinese went even further: they built vast walled enclosures as cosmic cities on earth.

After having been assaulted by the barbarians from the north, they woke up to the wisdom of border-spanning walls: they built the Great Wall of China to ward off the bandits. The first emperor of China Qin Shi Huang ordered his people to unify the wall with zeal.

As a result of centuries of building, the Great Wall of China was extended to more than 8,000 kilometres. But, with perhaps the exception of a few wild rabbits, the barbarians were not held back at all. China was taken and ruled for centuries by the Mongols and the Manchurians.

Dear Mr Trump, surely this is not what you want. A wall, as neatly summarised by the English architectural historian Robin Evans, affords the rights for retreat and gives rise to the rites of exclusion. But the common women and men in the United States of America are progressive and forward looking; they will not put you in the White House to lead them to retreat. You ought to build a different wall.

Let me pinch this idea of a splendid wall from the Chinese architectural historian Professor Liang Sicheng and market it to you, Mr Trump. (You will be delighted to learn that Professor Liang read architecture at the University of Pennsylvania in the 1930s, when law and order were in place and America was still great. So there is no Chinese conspiracy here.)

In the early 1950s, driven by a self-imposed mission to revitalise China’s pre-modern architecture, mixed with the high optimism generated by the new Communist government, Liang hoped that the new regime could save the magnificent city wall (dating back to 1264, when the Yuan dynasty imperial capital was beginning to be built) by turning it into a civic park for the leisure life of the citizens in the new era.

A hopeless romantic, Liang wanted to give the new republic capital a splendid “green necklace” of 39.75 kilometres, for the city wall that enclosed imperial Beijing would be greened by lawns and plants. This would be the world’s only city-ring-park in the sky; it was not only a civic place, but also would allow the residents of new Beijing to break away from the confined courtyards to climb high to inspect the horizon.

This, if materialised, would be a magnificent creation at a civic scale of a Chinese idea that might have existed only in imagination. It would be the collective garden for the vast tapestry of courtyards in Beijing.

China’s Chairman Mao Zedong, alas, was not quite as clear headed as you are: he worried less about the enemies’ attacks from beyond the wall than the internal law and order of his own people within the wall. Why would he give his newly minted republican citizens leisure in a park hanging in the sky?

Legend has it that the Chairman, in the early days of the new republic, once stood on the Tienanmen – the Gate of Heavenly Peace – while facing a sea of red flags, Mao reared his head to inspect the horizon: he envisioned a forest of gigantic industrial chimneys with black smoke bellowing into the sky. Mao saw this as the future of Beijing. Liang was devastated! The government went ahead to tear down the entire city wall to give way to roads – the symbol of progress and work, not leisure.

Protesters hold a banner reading ‘Wall Off Trump’ as they attempt to block an entrance to the arena hosting the Republican National Convention in Cleveland. Jim Urquhart/Reuters

But Mr Trump, you will build this sumptuous garden in the sky along the Mexican border. To ensure its efficacy, you will also learn from another Chinese wall that actually worked. In the grandiose Tang dynasty capital of Changan, in addition to the city wall and the walled imperial palace, all the residents were locked in the walled residential wards, much like that of the peacefully gated communities in America.

Night curfews were implemented to lock the gates of residential wards at dusk, and security guards patrolled the deserted streets and laneways at night to enforce law and order. Not that the residents had no freedom: they shopped in walled markets and visited walled gardens during the day!

Being an enthusiastic student of Chinese history, Chairman Mao surely had this glorious Tang dynasty idea in mind. After taking down Beijing’s city wall, he ordered to build dangwei (walled compounds of “work units”) not only for Beijing but also for the entire country.

For the next four decades or so, the Chinese life, from the cradle to the grave and from a farming hamlet to a factory, was all sorted and ordered in these dangwei enclosures.

The Chairman realised your dream, Mr Trump – that is, law and order. Better still, no criminal-minded illegal migrants ever dreamed of entering China in Mao’s heyday.

You too could see the common women and men of American, with full surveillance and military protection, walking their dogs, barbecuing and having a beer on your Great Wall.

Dear Mr Trump, let me most enthusiastically offer my architectural service to you to design your beautiful walls, though in the true capitalist spirit I must charge you a modest fee. I trust the engineers, the construction managers and the contractors will do just the same. After all, they will create jobs for America’s economy. With these walls, my dear Mr Trump, you will make America truly great again!

Professor of Good for a Wall

Shanghai, a modern metropolis born of a refugee crisis

Subcontractors speak out on productivity