The acclaimed author Christos Tsiolkas and UNSW academic and filmmaker Mary Zournazi are crafting a play that digs deeply into key challenges accompanying our ageing population. 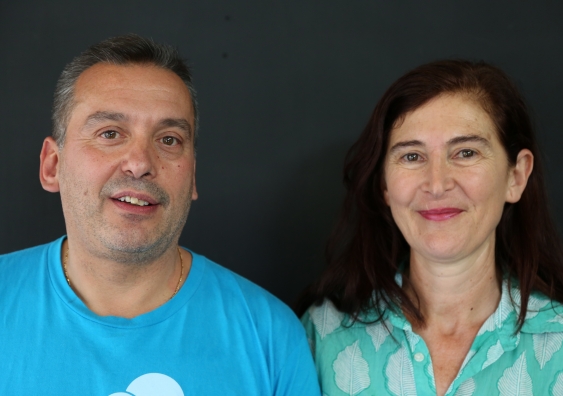 Christos Tsiolkas and Mary Zournazi: "A play only really begins to breathe in rehearsals, in workshops with actors. We will be able to hear the world we have created."

A simpatico moment over a casual meal sparked an artistic collaboration between Christos Tsiolkas and Mary Zournazi that has spanned more than seven years.

The award-winning author and the academic and filmmaker met at a Greek authors’ event 20 years ago where Tsiolkas was discussing the work that would become Dead Europe.

Tsiolkas is known for his raw depiction of the Australian psyche, from the disenfranchised anger and sexualised violence of youth in Loaded to his vampiric exploration of anti-Semitism in Dead Europe and the hypocrisy of middle-class Australia in the international bestseller The Slap.

Zournazi was struck by the power and sensitivity of his writing and they stayed in touch.

“He really does capture families and dysfunction really, really well. But also, in a very tender way – he’s a very tender writer, I think,” the associate professor says.

Years later, Zournazi, whose research in social sciences aligns closely with creative practice, discussed with Tsiolkas ideas for a play on family and dementia and the ethics of care. Tsiolkas was interested in the effect of inheritance on family. The ideas married well.

“I think the questions and complications around family are always fascinating and can often provide strong material for drama,” Tsiolkas says.

“The struggles that families go through with dementia is something that we are increasingly enduring as we live longer.”

They began exploring characters and situations in 2011, meeting in Melbourne and Sydney and, when their schedules allowed, for week-long workshops in the quiet of Tsiolkas’ house at Narooma in the Southern Highlands.

“Originally, we would write separately and come back together and talk about who the characters were and how they were sitting, but eventually we started writing together,” Zournazi says.

“The plot built slowly and it’s still developing. The first draft is quite different to the third.”

The play centres on Augie, a father with dementia, and his relationship with his carer, as well as issues of care, responsibility and inheritance that arise within his family.

'A play only really begins to breathe in rehearsals, in workshops with actors. We will be able to hear the world we have created.'

Augie’s voice is “quite powerful, quite strong. It’s actually the motor behind the play,” Zournazi says.

“By making the parental figure in the play [the one] with dementia we were able to add further complexity to what we were doing,” Tsiolkas says.

Augie’s dialogue is fragmented and poetic, based on Tsiolkas and Zournazi’s real-life observations of people with the disease.

“We have to see how that will translate with an actor, whether it does work efficiently, but I think it will. I think it should.”

The workshop is exploring different elements of the three drafts under the dramaturgy of acclaimed Australian playwright and screenwriter Stephen Sewell (The Boys, True Love and Chaos, and Chopper), with senior NIDA acting students Emma Kew, Yerin Ha and Timothy Walker reading the supporting roles. 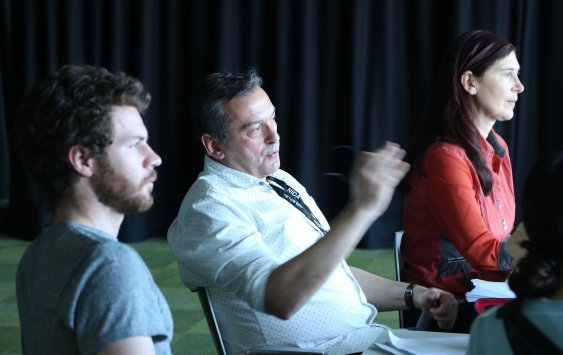 Timothy Walker, Christos Tsiolkas and Mary Zournazi at the workshop.

“We’ve been the actors, now we actually have to have other people embody the roles so we can start to see the characters, start to see the language, and what’s working and not working,” Zournazi says.

“A play only really begins to breathe in rehearsals, in workshops with actors. We will be able to hear the world we have created,” says Tsiolkas.

The collaboration is a less of a departure from Zournazi’s previous work than it might first appear. The play’s themes of identity, memory and storytelling are intrinsic to her research.

“I’ve been thinking a lot and working a lot on ideas of what memory is and how it functions,” she says.

“But also, questions of care – how do we care for people with dementia as well and what are the issues at stake?”

In 2014, she published Inventing Peace – A Dialogue on Perception with filmmaker Wim Wenders, the culmination of nearly a decade of conversations on the nature of peace and how we imagine it.

In 2015, she explored issues of care in her award-winning documentary Dogs of Democracy on the stray dogs of Athens and the people who took care of them during the austerity measures in Greece following the global financial crisis.

The creative expression of philosophical issues and social criticism has increasingly become a focus in her research and teaching at UNSW School of Social Sciences.

“Even though Dogs is nonfiction, the form and the medium allow a certain play,” she says.

The collaboration with Tsiolkas constitutes her first foray into fiction and she is conscious of the inherent risk involved.

“I think every time we write something, it’s almost like a potential failure,” she says.

However, the experience of working with Tsiolkas – a recognised master of the form – and developing a shared creative language has been both inspiring and affirming.

“Having similar experiences in terms of our background has really helped. It gave us an intuitive sense of how the characters might respond.”

Both Tsiolkas and Zournazi were born in Australia to Greek immigrants. Equally, the family in the play, while not specifically Greek, has a migrant background.

Zournazi sees a creative advantage in employing the power of fiction to convey complex ideas.

“[Fiction] speaks to the heart, it speaks to people’s whole self, rather than just part of them – the intellect or this or that – it can craft something that you cannot always craft intellectually,” she says.

The workshop, supported by Kate Cherry at NIDA, will lay the groundwork for the next draft of the play. Tsiolkas and Zournazi will direct the actors and reshape the script with the goal of preparing it for production.