Lindsay Kelley's work at the Powerhouse Museum has a whiff of cannibalism about it – but visitors can rest assured that everything tastes good. 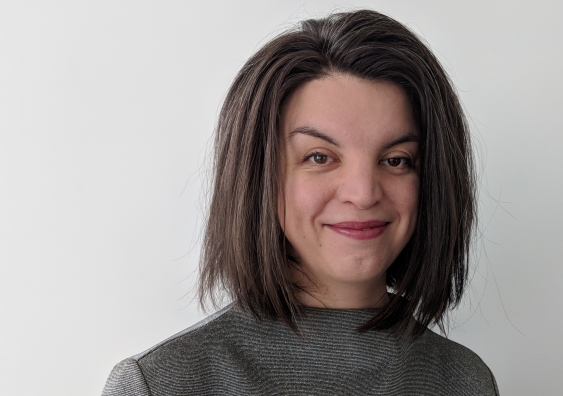 Artist Dr Lindsay Kelley admits that her occasional performances in her latest installation are “meant to be a little bit gross”.

The art practice of the UNSW Art & Design lecturer explores how the experience of eating changes when technologies are being eaten, and so the audience at her Ballistic Bundts installation might have the chance to eat edible gels in the shape of brains, hearts, eyeballs and wombs “with little grapes inside that are meant to be the embryos”.

“It’s a conceptual cannibalism in a way, but everything I serve tastes really good,” Dr Kelley says of her sporadic performances during the exhibition.

“That was really important to me, that if we were going to do something mildly disgusting, it has to taste really good.”

The sculptor and performance artist is one of four artists being exhibited in the Human Non Human exhibition at The Powerhouse Museum in Ultimo until January 2019.

The exhibition, part of the Sydney Science Festival, is an outcome from a UNSW-led international research project called Curating Third Space – The Value of Art Science Collaboration, which examines audience experiences of exhibitions.

The research project has involved three international museums: FACT (Foundation for Art and Creative Technology) in Liverpool, UK; the ArtScience Museum in Singapore; and the Powerhouse Museum (MAAS).

The Curating Third Space project uses a recently developed psycho-social method called the visual matrix, which is designed to capture the social nature of experience in museums, by getting groups of audiences to describe their response to an exhibition. 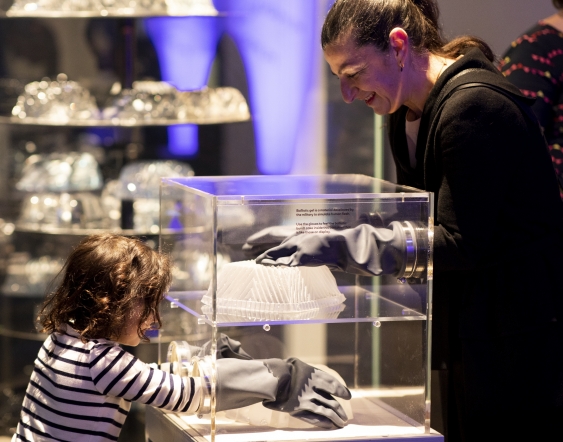 Visitors to the Powerhouse exhibition can experience the flesh-like feel of the ballistic bundts.

“As a result of our research with audiences, we designed Human Non Human to focus on themes that are vital to human experience: food, work, sex and belief,” she says.

“In each theme it shows how deeply entangled humans are with non humans – from plants and insects to data and microscopes.

“It also shows that the future has a past by including in the exhibition old technologies, the history of science and deeply grounded Indigenous knowledge, which is of course unique to the Australian context.”

Other artists in the Human Non Human exhibition include Dr Maria Fernanda Cardoso, who explores the beauty, seduction and biological imperative of reproduction and survival in her use of deep focus photography to capture the sex organs of flowers.

The Renderlands installation by Liam Young examines how the creation of computer-generated imagery for gaming, films and television is increasingly outsourced from the West to a huge workforce of animators in India.

Dr Kelley’s Ballistics Bundts installation is literally a kitchen of the past and future, and features a working sink, hot plate, kettle and fridge.

There are also sculptures of cakes made from ballistic gelatine, which mimics the density of human flesh to test projectile weapons, and a “touch tank” where you can feel the texture of this strange material. 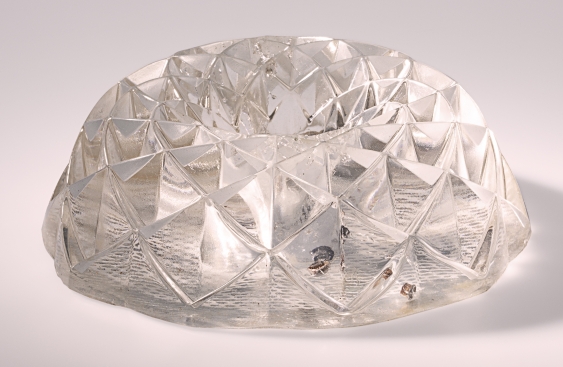 The ballistic bundts have a geometric beauty.

The US-citizen says the idea for the ballistic gelatine cakes came from sending care packages to her cousin, who was once a pilot in the US Air Force.

“I would send him these cakes and things that were always going to really hot climates like Kuwait and Doha, and I don’t know how to bake for those climates, so they’d always rot.

“And it became a bit of a joke, like how rotten they were and what colours they were.”

The artist was prompted to think about how to preserve food and the technologies that underpin military rations.

“Gelatine is both this food of the future and one of the oldest ways humans have preserved food,” she says.

“I was interested in materially tracing the substance I was working with through the collections, so I focused on these jelly crystals and jelly moulds because they were very much mirroring what I was making.

“I made these ballistic gel bundts from these really beautiful delicate moulds, and then I wanted to shoot them because it was that feeling when I was sending these care packages overseas that I was sending the cakes I made into violence.

“And so there’s that violent atmosphere I wanted to make that materially present in the cakes.”

Dr Kelley says the use of ballistics gel in her installation demonstrates that art, science and technology interact in a material way.

“So even though it was developed in this projectile weapons testing context, it is meant to emulate the texture and density of human flesh, so it’s found this other life in surgical applications,” she says.

“Instead of using a cadaver, students will train for surgery using ballistics gel.”

Dr Muller says she and co-curator Katie Dyer from MAAS will be continuing to work with audiences for the rest of this year whilst the exhibition is on show.

“We have already learned a great deal about the serious work that audiences do in museums – taking challenging and provocative works like Lindsay Kelley’s Ballistic Bundts, and producing new ideas about the human impact of science and technology,” she says.

“This is a long way from the idea of using art to 'communicate' science. Instead our research suggests that museums and exhibitions are vital for a society to generate ethical and social responses to scientific and technological discoveries.”

Human Non Human is at The Powerhouse Museum in Ultimo until January, 2019. Check the museum for Dr Kelley’s next performance.