How streets could become more liveable and inclusive post-coronavirus 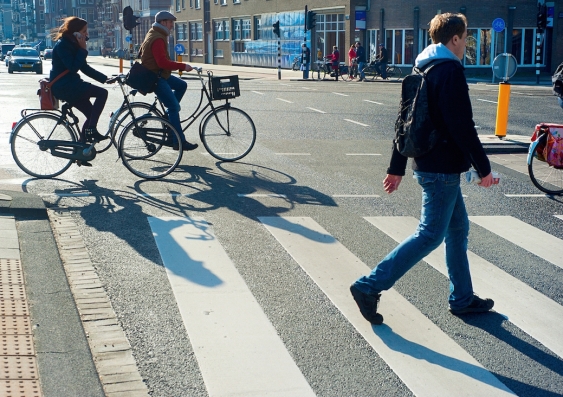 The coronavirus is exposing the shortcomings of vehicle-dominated street designs. Photo: Shutterstock.

Reducing the emphasis on cars and making more room for people to walk and cycle are just some of the ways streets could change for the better in the wake of the coronavirus pandemic.

According to UNSW Built Environment lecturer Dr Mike Harris, the coronavirus is exposing problems with our vehicle-dominated street designs that existed long before the pandemic.

“It’s showing the disproportionate amount of street space dedicated to cars, because all that space set aside for cars is now sitting idle, while our footpaths aren’t wide enough for people walking, especially under social distancing guidelines,” the landscape architect and urban designer says.

“People are also using their local streets more because they’re working from home. So we’re living more locally, and recognising more the need for better quality streets for our quality of life.”

The need for wider footpaths

The pandemic is highlighting the importance of immediately accessible open space and walking and cycling facilities that many parts of Sydney lack, he says.

“One of the arguments behind widening footpaths is so you can have space to pass people more easily, and with social distancing, it’s really shown just how narrow common footpath widths are,” he says. “Even in our densest areas, many are about one and a half metres wide, next to an expanse of asphalt for cars.” 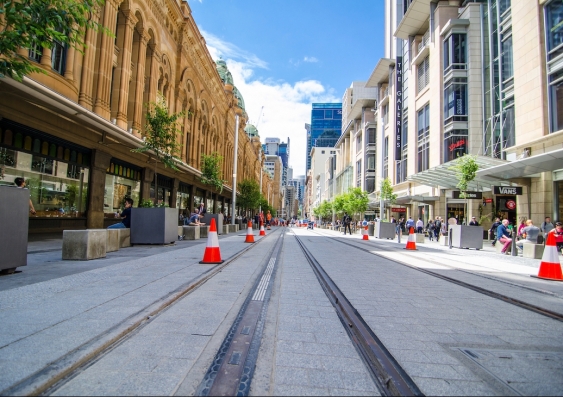 Footpaths have been temporarily widened with traffic cones. Photo: Shutterstock.

Footpaths should ‘arguably be at least double that width’, he says, and that’s before we add planting, trees, seating and bike lanes.

“There is so much that streets can do but are often so limited from all the space excised to move and store cars. It’s remarkably short-sighted when you think about it.”

In addition to widening footpaths, separated bicycle lanes and closing streets to cars are some of the other short-term streetscape measures cities around the world have taken to adjust to increased street activity.

“Most cities were already installing separated bicycle lanes, better pedestrian amenity. Like many trends, COVID-19 is increasing the speed of how these things get implemented,” he says.

“Everyone is getting a forced test run to trial these pop-up things, so it means that all of a sudden, everyone’s getting exposed to what our streets could be like,” he says.

Cities around the world are readily adopting temporary measures, with local councils in Sydney likely to follow suit.

“I’m surprised though that we haven’t [been as quick], there is such a clear demand,” he says, “although Centennial Park has closed to cars on the weekend because it is much busier than usual.”

Dr Harris believes that the ‘forced experiment’ could be the catalyst for transitioning towards pedestrian-friendly streets on a more permanent basis.

“I think people are showing that they’re super keen to get out there and experience the public space in a much stronger way than what they did previously, so the public is ready to go,” he says. 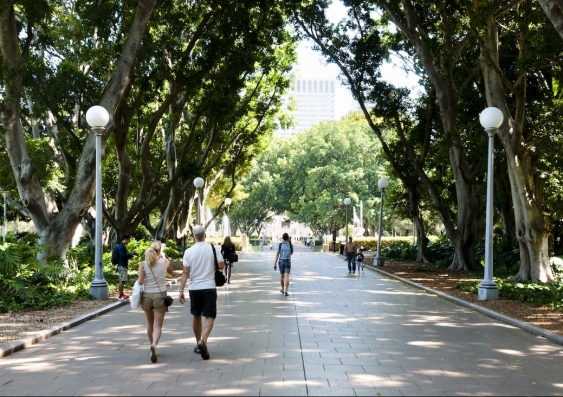 Wider footpaths and more pedestrian-friendly spaces could be on the cards. Photo: Shutterstock.

Bike sales have also increased dramatically during the coronavirus pandemic. While overall transport usage in the City of Sydney is down to 13%, cycling is only down to 60-90% of prior rates, Dr Harris says.

Surveys are showing that the majority of people think things are better with fewer cars; less pollution, quieter and safer streets, for example, he says.

"In the travel behaviour shifts [too] during the pandemic, most car commuters do not miss commuting at all, but the vast amount of walking and cycling commuters miss their commuting time."

Dr Harris believes that there will likely be a trend of more people using private forms of transportation in the immediate aftermath of the pandemic. But whether that leans towards the car or the bike is up to policymakers, he says.

“A message that has explicitly come from governments in bigger cities overseas is that if you can do anything right now, ride a bike,” he says. “If all those people who would usually take the New York or London subway decide to drive when they go back to work, the city will be gridlocked, similarly with Sydney.

“It’s an opportunity for a lot of people to consider riding a bike, at least for some trips or part of their trip, and a portion of them will want to keep doing it … but as is the case now most of those people will claim they want to, but can’t because there are not enough facilities,” he says.

He says we should invest in a greater number of smaller, easily delivered projects like cycleways, which have more local job creation and less financial and environmental costs.

“It’s definitely time, as the Committee for Sydney is now urging. Less than $10 per person, per year, is spent on cycling infrastructure in Sydney, compared to $41 in London and $50 for Vancouver.” 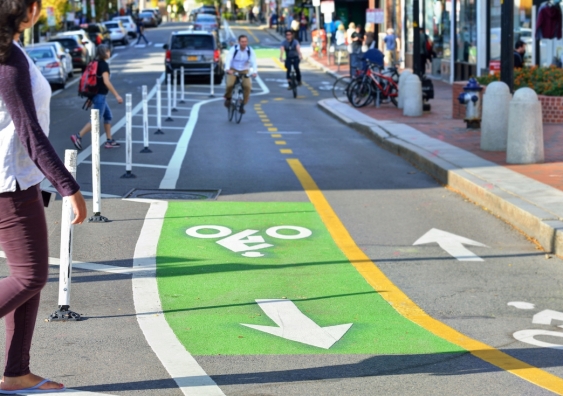 Investing for the next crisis

Dr Harris says that while reverting back to the vehicle-dominated streets would be easy, the rare opportunity to make our streets more liveable shouldn’t be squandered.

Just a few weeks ago, Beijing and Shenzen reported heavier peak-hour congestion than the same period last year, and Dr Harris warns that the ‘images of blue skies without air pollution’ may become a memory.

“What will need to happen is for the government to take the opportunity, while it’s there, to make some real changes,” he says. “If nothing much happens, with the passing of time, and if structural changes haven’t occurred in our streets, then slowly things will probably just go back to normal.”

He says doing so will have lasting impacts that could better prepare the built environment to endure a future crisis.

“There’s a long history of open space being used and transformed in response to public health crises. Planning for New York's Central Park began in the immediate aftermath of New York's second cholera outbreak in the mid-1800s, along with wider urban boulevards,” he says.

“One of the reasons cities in the Netherlands or Denmark are so pedestrian-friendly, cycling-friendly cities today is because the government made concerted decisions to rely less on cars after the 1970s oil crisis. They recognised it was a vulnerable and costly transport mode and made a series of policy decisions and planning changes, that a couple of decades later, you see these profound results of very healthy, engaging, prosperous, people-friendly cities.

“What smart cities will do is make use of this opportunity and enact intelligent decisions that in 20 years will make their cities better-quality places to live and work.”