In this show, 12 performers blur the boundary between dance and exhibition as they roam – naked – through Sydney’s Carriageworks, writes Prudence Gibson. 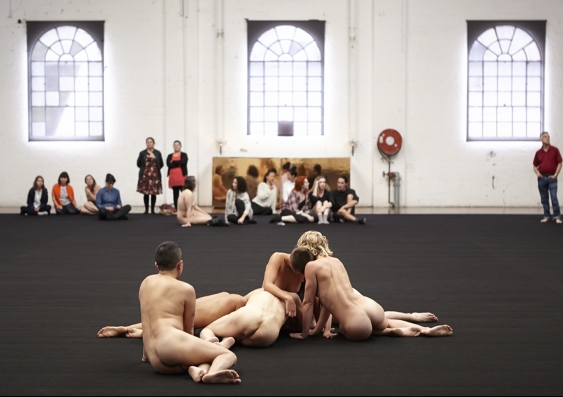 OPINION: I’d never thought of performance art as a health hazard. But based on the band-aids stuck to the performers’ knees in French choreographer and artist Xavier Le Roy’s Temporary Title, opening today at Carriageworks in Sydney, I’m reconsidering.

In this show, 12 performers blur the boundary between dance and exhibition as they roam – naked – through Sydney’s Carriageworks. They imitate a pride of lions as they move on their hands and knees, while patrons sit or stand around them.

I saw the performance at one of the Open Rehearsals, where feedback from the audience was welcomed. As I entered one of the Carriageworks track spaces, arched windows let in natural light. Carpet was laid to ease the passage of the performers who paced, padded and stalked around the room on hands and knees.

The question Temporary Title raised (beyond whether those sore knees would ever heal) was whether it was really effective to translate dance and choreographic working methods into an exhibition?

The performers ranged the floor; they collapsed into sleeping piles; they stopped and paused, to actively listen. They were choreographed to curl their fingers under, to slap down their “paws”, to sway their hind hips as wild beasts do.

They strode, and then froze, mid step – a common enough phenomenon in nature, but at Carriageworks it formed part of the choreographic patterning and improvisation.

The work was structured (as dance practice), it was temporal (though without clock precision) and it happened live. The pauses in the performers’ movements created a stillness that felt unlike anything we – as humans – are these days accustomed to. They were on high alert for changes among the audience, or new arrivals in the space, which affected the next series of movements.

In his choreography Le Roy has employed elements of repetition, unison, patterning and interruption. The interruption occurred when one of the performers broke rank and padded over to a member of the public, all of whom tended to nervously adhere to the four walls.

At the artist lecture, last Sunday afternoon at Carriageworks, Le Roy explained that the performers were encouraged to speak to the audience about anything they wished. There was freedom in these interactions, yet the questions (mostly about ageing, time, change and geography) seemed closely related to the re-wilding and the animalistic hyper-consciousness of the performance.

One of the remarkable and subtle elements of the choreographed “exhibition” – as Le Roy preferred that it be called – was the slight panting some of the dancers enacted when they were still. Dogs and lions, alike, pant to cool their body temperature, to restore themselves before the next phase of movement. Dancers, when they do it, train to hide such overt signs of exertion.

Le Roy presented live choreographed dance as an exhibition. Why defend the work as exhibition, rather than performance? Perhaps, to raise the status of dance and to disseminate it to a broader public.

The aesthetic of recruitment

Is it enough to recruit dancers and present them as interactive, moving art objects? Or is it just another annoying trend of merging disciplines, so that none stands alone?

During the performance, my friend and I were approached by independent artist Ivey Wawn, who asked us in a slightly stuttered and innocent way, how we knew if we were moving north, south, east or west.

This is what academic Tom Apperley calls the “aesthetic of recruitment,” which is where strangers gather together to play, such as in computer games. It is a calling upon the public to widen the discourse, to both assure and disrupt, to participate and disorganise.

Ivey recruited my friend and me to speak philosophically about the curve of the planet and human relationships with it. What was the effect? Well, it was a variation from the experience of watching nude human bodies pace.

In an era in which recruitment has become an aesthetic, where social media can create impromptu gatherings and crowds, it makes sense that choreographed dance interacts with exhibition spaces in innovative ways.

Temporary Title is an apt name for an art experience that provided quick-fix sensory reactivity and melded connections between animal behaviour, transitioning social spaces and philosophical posturing, in a condensed format. In the end, though, I couldn’t help but feel there was something overly familiar – or maybe askew – with this work.

Maybe it was just fatigue from seeing all the band-aids caused by carpet burn. I really hope it wasn’t because I kept thinking of The Lion King.

Temporary Title takes place at Carriageworks on November 20, 21 and 22. Entry is free but bookings are essential. Details here.

Prudence Gibson is an art writer and tutor at UNSW.

Dance in the arts: choreographing collaboration in museums