Opinion Just give cash – the key to effective aid

While it’s nice to imagine tents, water tanks and food parcels being rushed to a far flung village beset by misfortune this Christmas, it could be of dubious value, argues David Sanderson. 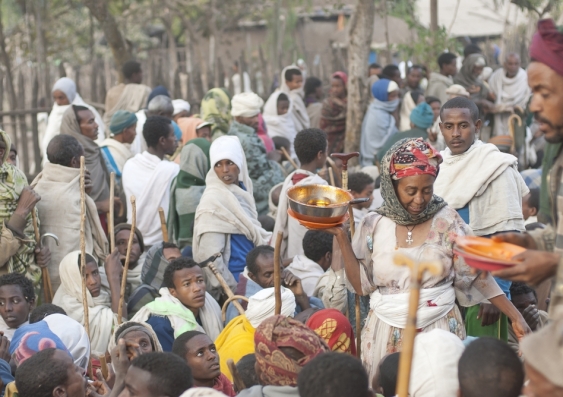 OPINION: If you are looking for a charity gift that really makes a difference, just give cash. While it’s nice to imagine tents, water tanks and food parcels being rushed to a far flung village beset by misfortune this Christmas, it could wind up being of dubious value.

When we see aid in terms of what we think other people need, and how good it makes us feel to give, the results aren’t always ideal.

Now more than ever we need people to give. Today, 65 million people are displaced around the world, mostly as a result of conflict, more than at any time since the end of World War II.

Over decades, well-meaning governments, aid organisations and donors have wasted billions of dollars on thoughtless aid. That’s the kind of giving that sends revealing Western women’s clothes to a conservative Muslim area of Pakistan, following an earthquake. Or a program that sends expensive tents half way across the world to the Philippines, in the wake of a typhoon, when a local builder could reconstruct a house for a fraction of the cost. Or the new schools and medical clinics that will never be used because there’s no staff in the local area to run them.

Now more than ever we need people to give. Today, 65 million people are displaced around the world, mostly as a result of conflict, more than at any time since the end of World War II. Over the past two decades an average of 218 million people have been affected by natural disasters every year, at an annual economic cost of some $300 billion. Aid budgets are stretched to breaking point. As climate change triggers more severe and more frequent extreme weather events, the demands on relief funds will only intensify. Aid saves and transforms millions of lives every year, but the challenge is to get it right so we can make every dollar count.

Over the past 75 years very little has changed in the way the world does aid. We mostly give stuff – huge volumes of goods are transported, often at considerable cost, to help the needy. Sometimes this is absolutely essential, if food, water or medical supplies are unavailable, for example. However in many cases, we overlook the resilience of survivors, and their local economies, and their desire and capacity to steer their own recovery. Earlier this year, at the landmark World Humanitarian Summit, 173 nations endorsed a new approach to aid, including a so-called ’Grand Bargain‘ that ‘trusts people affected by disaster with their own future’. This includes putting cash in their hands.

According to a growing body of research, the most effective aid is often the most straight forward; distribute cash, or its equivalent, on the frontlines of tragedy.

Currently, only some 6% of global aid is delivered as cash handouts. Yet, according to a growing body of research, the most effective aid is often the most straight forward; distribute cash, or its equivalent, on the frontlines of tragedy (the caveat is where markets are working, which they almost always are). Replacing food packages with money could, for example, help us reach far more people. This is partly because money is cheaper and faster to deliver than bulky goods – especially as ubiquitous digital connectivity and access to mobile phones makes it possible to send funds instantly across the world. Just as importantly, it is because people spend cash on exactly what they need most, avoiding any waste. With cash, we can avoid a one size fits all response.

The World Food Program, the global organisation established specifically to deliver food aid, recently reported that cash handouts had proven 25-30% more efficient in helping communities in Ethiopia. And, during the 2011 famine in Somalia, which killed more than 250,000 people, aid agencies successfully used remittance companies to provide cash transfers to more than 1.5 million Somalians, helping them survive and recover. In Lebanon, more than a million refugees today use smart card vouchers to shop locally or ATM cards to withdraw cash, instead of receiving any goods.

Aid distribution is, of course, vulnerable to corruption or diversion away from the most needy, especially in volatile, violent conflict zones. Yet in war torn Somalia, one of world’s highest risk nations for humanitarian agencies, 2.5 times more aid reached the intended beneficiaries when cash was sent in place of food.

Giving cash is part of changing the paternalistic way we have long thought about aid. A large international study of 5,000 people caught up in disasters around the world found overwhelmingly that what survivors really want is to be heard. That is, they don’t want to be ‘saved’ and they don’t even want aid agencies to rush in, unthinkingly, to do so. Instead, they want agencies to take the time to understand their local conditions and to ask them what they need to help themselves.

This is what I’d call thoughtful aid –­ aid that is carefully given and truly designed to help. Increasingly, it will also be the simplest to give, via an electronic transfer from a device anywhere in the world.

A version of this opinion piece was first published in The Sydney Morning Herald.

Professor David Sanderson is a globally recognised expert in disaster risk-reduction and recovery with decades of experience working in the field. As UNSW’s inaugural Judith Neilson Chair in Architecture, he leads a unique research and education program developing sustainable solutions for those displaced by natural disasters, geo-political conflicts, poverty and climate change. He spoke on effective aid at UNSOMNIA, the launch event of UNSW's Grand Challenges program.