Opinion Lighting spotfires under a palace of colonial power 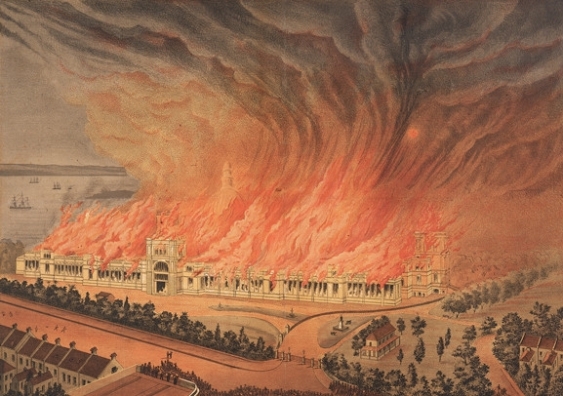 OPINION: Could a fire in the heart of Sydney have been so combustible that fragments of hot iron landed in the suburbs of Balmain and Elizabeth Bay? Well, yes. Early in the morning of Friday 22 September 1882, the three-year-old Garden Palace rapidly burned to the ground.

It sent roaring flames high into the sky and cracked with the shattering of state-of-the-art industrial ceramic pipes and manufactured etched glass.

The Garden Palace was a classical structure, designed by colonial architect James Barnet and built near Macquarie Street. It was a colonial response to London’s Crystal Palace, which had vast internal gardens and exhibited the latest in industry design, manufacturing and technology.

In 1851, the Crystal Palace held a famed international exhibition that reflected global exhibitionism and colonial power, launching a new level of consumerism for anyone with even the slimmest disposable income. This was a great public event, open to all classes, and its notoriety spread like wildfire.

In 1879, Barnet’s Garden Palace was built on the shores of Sydney Harbour, with symmetrical design principles, four lantern towers and many celebratory flag poles. For the 1879 opening of the Sydney International Exhibition, a cantata song was composed with the title and chorus “How like England we can be”.

With this colonial mimicry of the Commonwealth in mind, indigenous artist Jonathan Jones and John Kaldor Art Projects are working towards an epic exhibition, called barrangal dyara (skin and bones). It draws on the epic fire at The Garden Palace, which turned this monument to colonial grandeur to cinders, and will open in September at the Royal Botanic Gardens Sydney.

Jones transforms this fire story into an indigenous redressing of colonial events. He says:

The rise and demise of The Garden Palace was part of the whole nation’s identity at the time.

Consequently, Jones is exploring the original stories of indigenous people that relate to this time and how they can be retold.

Three symposia have been organised by the Kaldor team to develop ideas and concepts for the final exhibition. At last weekend’s Spotfire 2 symposium, Jonathan Jones spoke to the audience with quiet confidence and collected pride. He invited Gadigal Elder “Uncle” Charles Madden on stage for a chat, before curatorial, library and architecture panellists gave fascinating papers on various aspects of the palace.

The public conversation between the two indigenous men, mostly focusing on the history of the Redfern All Black team, set the tone for the day. The discussions were a reminder that Aboriginal people own this Sydney land, Aboriginal people own their pre – and post – invasion history and the great fire that lit up the Sydney skies is a part of indigenous storytelling too.

This epoch of Australian history, delivered through the lens of an Aboriginal perspective, is especially interesting because the late 19th century marked the start of museum collection management.

When the Garden Palace was being built, board members of The Art Gallery of New South Wales demanded a nine-room annexe of the Palace be designated for the storage of some of their art. But before the artworks could be stored there, the fire engulfed the annexe. The gallery’s collection was subsequently held on site.

At the time of the fire, 1882, there were no Aboriginal artworks or specimens in the collection. None were acquired until the 1940s. In fact, it wasn’t until 1958 – when then Director Tony Tuckson built relationships with the people of the Tiwi Islands – that Aboriginal artworks started to be seriously collected by the gallery.

The design of the Garden Palace was based on the classical principles of the Roman architect Vitruvius – such as “decorum” – a lecturer in architectural studies at the University of NSW, Dr Peter Kohane, told the symposium. Decorum refers to appropriate expression and theatricality.

Jones presents the palace as a “highway to nationhood” but shows, through his intellectual and artistic responses, that there are glimpses of indigenous cultural practices in this fire story. These glimpses subvert the protocol or decorum of white history and develop the memory and place of indigenous performative responses – grasses, fires, collecting, community – for his imminent exhibition.

This is important work and it is also sobering. His exhibition is the kind of political act that will have widespread, subtle effect, as it presents the loss of the palace as a symbol for the far more tragic loss of Aboriginal life during the colonial era.

The Garden Palace was built on a site and in a position where it was oriented in the right direction, towards the harbour. Jonathan Jones’ symposia and no doubt his exhibition follow a similar re-orienting of non-indigenous habits.

They are a reminder to us to recall what came before, compelling us to see that we are only renters on the Gadigal land, and any sense of possession or entitlement is misplaced.

So often, it is art that can mediate errors of the past and present, and open up new ways of perceiving history and nationhood. I look forward to Jonathan Jones’ exhibition in September so see exactly how he pulls it off.

Prudence Gibson is an Art writer and Tutor, UNSW.

Congratulations Natasha Bieniek, but the Wynne Prize is deeply flawed