Parasitic art in Denmark’s Sculpture by the Sea

Forget Bondi. UNSW's Richard Goodwin has taken his latest public art work to Scandinavia for Denmark’s version of Sculpture by the Sea. 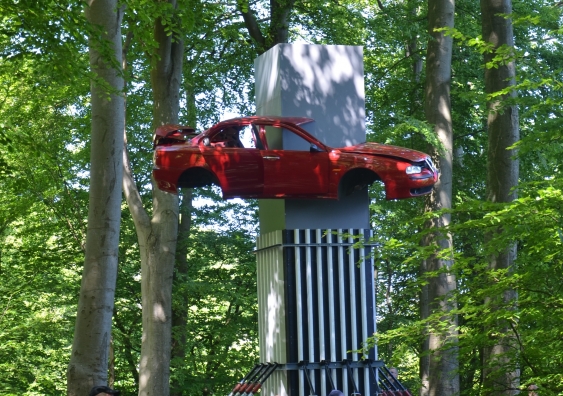 UNSW Professor Richard Goodwin is one of only seven Australian artists selected to take part in Sculpture by the Sea, Aarhus – Denmark, an outdoor exhibition of 55 sculptures displayed on the coast of Denmark’s second-largest city, Aarhus.

An award-winning artist and architect, Goodwin is exhibiting TWIN PARASITE, a large-scale sculpture that features a wheel-less car appearing to have collided with a column in mid-air.

The sculpture builds on the artist’s previous Exoskeleton and Parasite series, which explore Goodwin’s fascination with mechanics and the transformation of existing objects and architecture to give new meaning.

He describes TWIN PARASITE as “the collision of architecture in process and ideas about sculpture or experimental art post 9/11”.

Goodwin, from UNSW Art & Design, has been awarded numerous major prizes including: The National Sculpture Award 1985, The Sculpture by the Sea Prize 2003, Helen Lempriere Award 2004, the Blackett Award for Architecture in 2004, and the Wynne Prize from the Art Gallery of NSW 2011.

His architectural practice concentrates on parasitic connections between private and public space. Recent works include the Cope Street parasite and the Deepdene Parasite.

More than half a million visitors are expected to visit the Danish Sculpture by the Sea, which opened last week.

The initiative to establish the annual exhibition came from The Crown Prince and Princess of Denmark’s enthusiasm for the Bondi exhibition, which they visited as part of Sculpture by the Sea’s 15th anniversary celebrations.

Sculpture by the Sea: King Coal steals the show