Opinion Patchwork, ironic, serious and kitsch: the best of the Archibald finalists

The 51 Archibald finalist have been hung at the Art Gallery of New South Wales, and many of the works have not necessarily been chosen on aesthetic grounds, writes Joanna Mendelssohn. 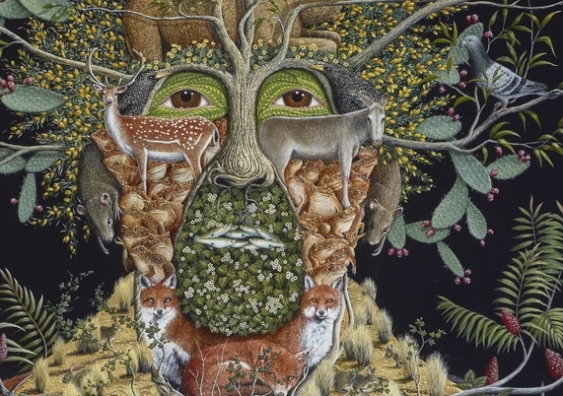 OPINION: In early 1973 I was responsible for administering and hanging the 1972 Archibald Prize. This was not because of any expertise on my part but because, as the most junior lowly curatorial assistant, I was given the most loathed of all curatorial tasks. It’s fair to say that back in the 70s the Art Gallery of New South Wales' attitude towards the Archibald was a combination of deep embarrassment at the quality of the entries, and a recognition that this was one event they didn’t need to publicise.

Some years ago, under the directorship of Edmund Capon, the gallery learnt to love this bastard child of Australian nationalism – especially as it realised it could charge admission and thus use Archibald profits to fund other activities. It also realised that by hanging fewer works, white walls and marble floors had the ability to make both banality and comedy look their best.

This year 51 finalists have been hung from 830 entries, and it’s worth noting that works have not necessarily been chosen on aesthetic grounds. This is fair enough, as JF Archibald’s will specified that the judges must be the gallery’s trustees. When he wrote his will in the early years of the 20th century, the trustees were almost all artists.

If judging the Archibald was purely an aesthetic decision, this group may be less than desirable – but of course it isn’t. JF Archibald made it clear that he wanted Australia to have a sense of its own history, and establishing the circumstances where well-known Australians are likely to have their portrait painted encourages a sense of visual identity. What we see every year is a selection of portrait subjects that interest both artists and trustees.

For those in the know there is really only one room that counts when trying to guess the Archibald winner – the centre court where the announcement is made. Occasionally, very occasionally, the winner may be chosen from one of the outliers, but I doubt if that will happen this year. For my money, the eventual winner is most likely to be either Natasha Bieniek, Imants Tillers or Guan Wei.

Imants Tillers, the man most likely

Imants Tillers' Double reality (self portrait) is both a considered investigation of the artist’s mind and passions and a challenge to the popular nature of portraiture. He’s been challenging staid conventions for so long that he almost appears to forget he is no longer a kid from the suburbs but, in the context of the Archibald, a total insider.

He is both a former Trustee and a former winner of the Wynne Prize. Those who think portraits should be dominated by a single image of the subject’s head can take comfort from Kirsty Nielson’s photorealist portrait of Garry McDonald that hangs next door. Then when they turn again to the Tillers they can wonder why this patchwork arrangement of words, drawings of trees and spiders, with a few monochrome self-portrait images of the artist is so much more satisfying.

Easily the most overtly political painting, Guan Wei’s Plastic Surgery hangs directly opposite Tillers, indicating that it too has a strong chance as winner. Guan Wei came to Australia in 1989 and now moves between China and Australia.

Plastic Surgery is an ironic series of self portraits looking at notions of cultural identity, physical appearance and bureaucracy. Chinese Guan Wei is physically modified to become blonde, blue-eyed David Guan, complete with Australian citizenship, a Medicare card and a Commonwealth Bank logo.

I always thought Wendy Whiteley should have been painted by Dante Gabriel Rossetti or perhaps John Everett Millais. Their intense pure colours and fine detail would suit her particular features. Natasha Bieniek’s portrait of Whiteley in her garden captures some of the Pre-Raphaelite quality of Whiteley, but now her beauty is touched by time, as every wrinkle is painted in meticulous detail.

This too hangs in the winner’s circle but is so small it can easily be overlooked. Bieniek is the mistress of brushwork so fine that it takes a magnifying glass to see it all. It would be an interesting repudiation of the Archibald’s tendency to go for big works if she were to win. But there is a precedent as she was awarded the Wynne Prize last year for a work on a similar scale.

Some of the more interesting entries can be found outside the winning central court. These four works are all worth a second look.

Tony Albert (after Brownie Downing) – the triumph of gentle irony

Tony Albert’s self portrait, apparently painted by one of Downing’s kitsch Aboriginal children and admired by a koala, manages to create a sense of amusement and an embarrassed cringe at the same time. Albert has long incorporated kitsch images of Aboriginality into his art, but this is an especially cheerful version.

Danielle Bergstrom – the ghost of Archibald’s past

Guy Warren won the 1985 Archibald with a portrait of his old friend Bert Flugelman. Now Bergstrom has given us a portrait of the artist as an old man, almost a ghost, with ethereal flutters of paint around his white hair. But still he is an observer, always watching, always seeing what might be art.

Louise Hearman’s intense academic portrait of Barry Humphries is a reminder that while Sydney’s arts community tends to regard the Archibald as a bit of a joke, for some reason Melbourne people take it seriously. This is a little gem of a portrait, with the comedian’s face sharply emerging from black gloom.

Michael McWilliams' self critical self portrait

The Tasmanian artist Michael McWilliams' The usurpers (self portrait) is a magically elaborate study in a similar mode to that of the Italian Renaissance artist Giuseppe Arcimboldo. Every element is an import to Australia. Sheep, cattle, pigeons, carp, trout, rabbits, rats, mice, fruit and grain, all combine to form the artist’s face.

The usurpers hangs at the entrance to the exhibition, a long way from the winner’s circle, but it is probably the painting that most visitors will remember.

Joanna Mendelssohn is an Associate Professor at UNSW Art & Design.