This year’s Wynne prize standard is as haphazard as ever, perhaps partly due to the Trustees behaving like curators, rather than prize selectors, writes Prudence Gibson. 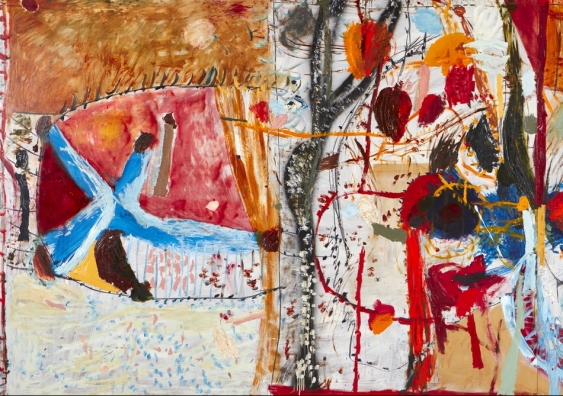 OPINION: The Wynne Prize is bestowed upon the best landscape painting of Australian scenery or best figure sculpture. This year, over a third of the finalists - 15 out of 42 - are Indigenous artists, and 11 are from the Anangu Pitjantjatjara Yankunytjatjara (APY) lands in central Australia.

In fact there is an entire room dedicated to Aboriginal landscape paintings. It is unusual to have such a large portion of the Wynne dedicated to these works, and disorienting to discover them separated from the rest of the exhibition. Presenting these works on their own draws attention to the difference of Indigenous art within the wider Australian art sphere rather than integrating it.

In the forecourt, a simultaneous exhibition, installed only this week, includes more works by APY Lands Art Centre artists. They were selected from the gallery’s permanent collection, and may have been pulled out to complement the Trustees’ selection for the Wynne. This is heartening, and no doubt heartfelt, but focusing on increasing the representation of a marginalised group can result in a compromise of the standard of works selected.

Overall, this year’s Wynne prize standard is as haphazard as previous years. This is perhaps partly the result of the Trustees behaving like curators, rather than prize selectors.

Choosing a large number of finalists from the same remote region may have seemed like a means of strengthening the visual experience for visitors, whilst also complementing the showcasing of their permanent collection, but hanging them together creates a sense of tokenism.

Luckily, a truly alluring work diverts my attention from pondering these issues. It is a Nyapanyapa Yunupingu landscape, hung in an unassuming position, just outside the main room of Indigenous finalists. Yunupingu’s artworks are synaesthetic rather than only awakening a single sense. They sing and shudder.

The paint leaps from the bark and confounds my vision with images of other wildlife. The white forms, which are either wildflowers, humans or other vertebrate creatures are all of those species at once, as they dance across the dirt. Spend a little time in front of her painting and the gallery starts to melt away and be replaced by cicadas, a breeze rushing through spinifex grass and the distant sound of people murmuring.

The other stand-out work, and my pick for the most deserved finalist entry, is Juz Kitson’s poetically titled sculpture “That which provides safety and the possibility of growth, that which you can put your trust in”.

Testicle, bladder, labia, intestine or foetus? Kitson’s assemblage of fur, seed and porcelain shapes creates a sexualized and fetishistic object of worship. Think of a Game of Thrones cloak. Think of a death pyre of antlers. Think Haitian Voodoo ceremony. Think of a giant clitoris. Kitson’s work has all of these elements.

It sits outside human time and has the character of something that could have existed before human life and afterwards too. I couldn’t contain my curiosity about what materials Kitson used and so I messaged her on Facebook. The swift answer: Jingdezhen porcelain and Southern ice porcelain/terracotta clay along with paraffin wax, resin, polyester thread, merino wool, fox and rabbit pelt, Tibetan gazelle horns, teeth, echidna quills and Bodhi seeds. Wynne Prize 2017 finalist Juz Kitson ‘That which provides safety and the possibility of growth, that which you can put your trust in’, 200 x 133 x 50 cm. © the artist Photo: Mim Sterling, AGNSW

A second reason Kitson’s work stands out for me is a political one: climate change. During an epoch of climate fear, and as we endure a lack of environmental leadership in Australia, there are many artists working to mediate these issues via their work. Art is a litmus test for public opinion and can be an effective way to disseminate important political ideas.

These ideas are mostly absent from the work of this year’s Wynne Prize finalists. Only Kitson’s brings to mind the concept of extinction, via the mass of horns, and nature’s deathly drive, through the overall image of a relic or artefact. Her work represents the remains of the human and the animal. It is futuristic, dark and a looming memorial for extinct species, one of which may be “the human” in years to come.

There are some robust scenes of the Australian landscape in the finalist line-up. For instance, John R Walker, Nicholas Harding, Angus Nivison, James Drinkwater, Joshua Yeldham and Philip Wolfhagen all have highly competent and technically proficient paintings of conventional bushland scenery.

Several of these paintings draw upon classical compositions where the scene is framed by trees or picturesquely arranged around a “hero tree”. Or they comprise a composition where the view penetrates through recalcitrant scrub land. These are mostly patriarchal conventions of traditional landscape painting, which is a reminder of the prevailing gender bias of previous Wynne prize exhibitions. Kitson and Yunupingu, conversely, do not rely on traditional conventions of landscape painting. They open a door to a deeper experience of the material world, to that particular matter of being. Somehow, they make physical the spiritual, they make seeing a more multi-sensual experience, and so they change our perception of the natural world.

Jux Kitson’s work also has an enormous amount of working labour, discretely visible in each and every carefully formed and cast porcelain part. It heralds a strong political point about the epoch of the Anthropocene and the damage we have caused to the land.

Likewise, whilst in the gallery space, I was constantly drawn back to Yunupingu’s landscape. There, modest and silent, the bark painting calls me, in a personal way, into a desert scene where women walk across the sand dunes, and talk together for hours. It sends me into a spin of delirium, into a vortex to where there is a real experience of lakeside flowers, where I can hear the mourning groans of the land.

However, based on past experience, I suspect neither of these two powerful artists will win. Instead I contend that one of the brightly coloured APY Indigenous works, all hung together in the high-ceiling gallery space, will win the day.

They are big and bright and colourful. Whilst it is crucial that Indigenous art gains greater momentum in the ongoing accumulation of landscape imagery in Australia, it is also important to select artworks carefully for inclusion in the Wynne Prize exhibition and not to mistake politics for aesthetic value.

Prudence Gibson is an Art writer and Tutor at UNSW.