The power of one: Indigenous educator to be recognised with Honorary Fellowship

Art & Design Indigenous elder in residence Uncle Vic Chapman has been dedicated to bettering the lives of Aboriginal youth for more than 65 years. 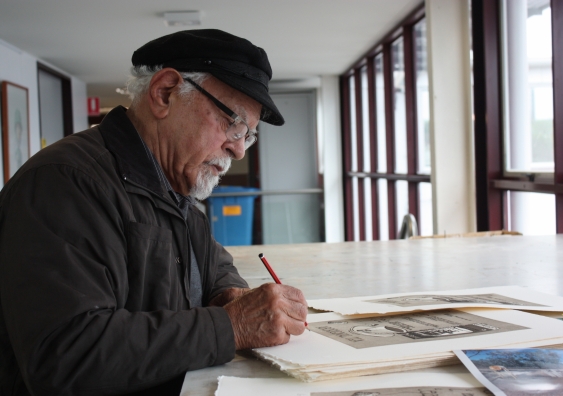 “It all goes back to that one teacher and I always remind people that ‘the power of one is real’." - UNSW Indigenous elder in residence, Uncle Vic Chapman.

When Yuwaalaraay man Vic Chapman attended school in southeast Queensland in the 1940s, it was usual for Indigenous boys to leave at the end of primary school to work in the pastoral industry, while “females cleaned peoples’ houses and did their laundry”.

Chapman, who was the last of 15 children and whose parents had received no education, says he was destined “to be a shearer, and not a very good one at that”.

But in 1944, a school teacher, Mr McKinnon, realised the potential of Chapman and suggested he sit for a state bursary “and that became the start of my journey in education”.

“It all goes back to that one teacher and I always remind people that ‘the power of one is real’,” the Indigenous elder in residence at UNSW Art and Design says.

“It changed my life, just that one person.”

Chapman, who will be conferred an Honorary Fellowship by UNSW Chancellor David Gonski at the Art & Design graduation ceremony on Wednesday (November 7), says he always wanted to be a teacher.

“I wanted to change people’s lives as Mr McKinnon had done for me,” he says.

“I think I’ve done that in lots of instances and that’s my great delight – that I’ve made a difference, and in the process, made lots of very, very firm friends.”

The Honorary Fellowship recognises the 87-year-old's lifelong commitment to education and the Indigenous community.

An educator dedicated to bettering the lives of Indigenous young people for more than 65 years, Chapman was one of the first Aboriginal teachers and principals in NSW.

“When I was working in schools, there was a regulation in the Teachers’ Handbook which said that a person of Indigenous descent could be excluded from the public school system at the protest of one non-Indigenous member of that school community,” he says.

Chapman is also an accomplished ceramicist and carver with more than 50 years’ experience as an artist.

He continues to exhibit nationally and internationally, translating the stories of the Yuwaalaraay to ceramics and print making.

Five years ago, he was invited to UNSW after the Head of Printmaking, Michael Kempson, saw his ceramics and thought the art would translate well to printmaking.

Every Friday since then he has travelled from his south coast home to UNSW Art & Design, where he mentors students at the printmaking studio, Cicada Press.

“The main purpose is to talk to Indigenous students about their courses, their problems, and encourage them to complete what they came here to do. It will benefit them personally, hopefully have a flow-on effect to others in their community and also benefit the great country we now share with people who over time, have come from all points of the compass,” he said

Kempson says while making prints is rewarding, the core business of Cicada Press is education and a constant reminder of that responsibility is Chapman.

“Vic Chapman acts as a mentor, the grace and precision of his wise counsel is incalculable and is not restricted to our Indigenous cohort,” Kempson says.

“They see him as someone who understands their particular needs with a sensitivity of an artist and the wisdom of an elder,” Allas says.

The Indigenous programs director says students deliberately seek Vic Chapman out for his wise counsel and he has helped with the Indigenous cohort’s retention rate.

She says there is a feeling among Indigenous students that “they do not want to let (Mr Chapman) down”.

“They understand that his life experiences of hard-won battles in achieving his educational and artistic career has cut a path upon which they now tread, and they do so with great respect and a great desire to honour him."

The manager of Art & Design’s Making Centre, Jim Ward, says Chapman is a joy to work with and epitomises the contemporary, collaborative maker.

“He is adept at getting the best results from everything he lays his hands on and he is willing to share and learn from those around him,” Ward says.

Mr Chapman, known as 'Uncle Vic', retired from teaching in 1990, the year he was recognised in the Queen’s Birthday Honours list and awarded a Public Service Medal for his outstanding service as a member of the NSW Public Service.

He has also been highly involved in community life.

In 2003, this lifetime of community service was recognised when Uncle Vic Chapman was awarded the Centenary Medal for his Contribution to Indigenous and non-Indigenous communities.

Since 2003 he has been involved in Indigenous language revival, contributing to the Yuwaalaraay and Gamilaraay Dictionary and other language resource material developed with Australian National University lecturer Dr John Giacon.

Chapman’s life story is about to be shared in a documentary for the NSW Teachers Federation, which celebrates the courage and resilience of those who, for over a century, fought for the right of Aboriginal children to public education.

He says he has a great stake in UNSW. Two sons attended the University in the 1970s; his “adopted” daughter is Tess Allas, the Director of Indigenous Programs at UNSW Art & Design; his grandson is currently studying Medicine at UNSW; and his grand-niece graduated from Medicine at the end of last year.

He says he’s had “a long and interesting walk and met some great people along the way”, including newly arrived immigrants from war-torn Europe in the 1950s.

“They weren’t always afforded the great welcome usually attributed to Australians,” he says.

“And considering the present political climate I wonder if we as a nation have learned anything at all about compassion.”

Chapman says he would like to think he did change someone’s life for the better.

“Rewards don’t always come at the end of a lesson, end of a week or end of a month. It could come 60 years down the line. It’s a present that’s worth waiting for.”