Celebrated artist and curator Brenda L Croft will use her prestigious Australia Council National Indigenous Arts Award to explore her father’s experiences as one of the Stolen Generation. 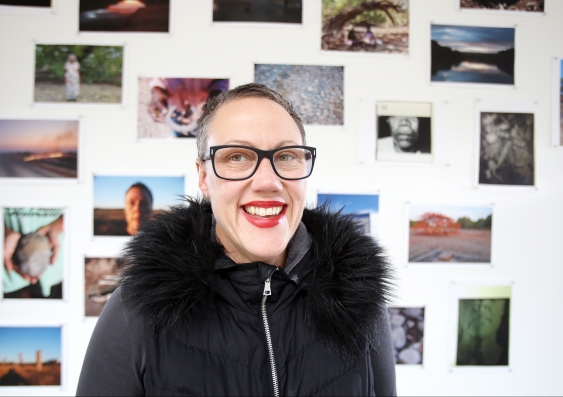 Celebrated artist and curator Brenda L Croft will use her prestigious Australia Council National Indigenous Arts Award to explore her father’s experiences as one of the Stolen Generation.

Now in its 8th year, the annual awards celebrate the achievements and artistic creativity of four exceptional Indigenous artists.

Croft, a Senior Research Fellow with UNSW Art & Design’s National Institute for Experimental Arts, received one of only two Fellowships, worth $90,000 over two years, to create a major visual art project.

The artist will use collected audio, film, stills and personal memories associated with the journeys of her father and his contemporaries from the Stolen Generations to create Solid/shifting ground an experimental, multi-media, collaborative art project.

“I am making work from an auto-ethnographic, immersive standpoint as a person of mixed heritage – Gurindji/Malngin/Mudpurra on my father’s side and Anglo-Australian/Irish/German heritage on my mum’s,” says Croft.

Her father, Joe Croft was removed from his mother when he was four years old and grew up in The Bungalow home for “half-caste” children in Alice Springs. In adulthood he became a surveyor and then an Aboriginal adviser in Canberra and close ally of Indigenous leader Charles Perkins.

“I consider myself part of a Gurindji diaspora, living away from customary homelands, like so many of our community who are descendants of the Stolen Generations.”

Croft hopes “to write my father’s story for his grandchildren, so they know who they are as contemporary Gurindji/Malngin/Mudpurra and Anglo-Australian young people who are following in the footsteps of those who fought for equal rights for all of us.”

She will stage a collaborative exhibition with Karungkarni Art and Culture Aboriginal Corporation at the UNSW Galleries next year, followed by a national tour to selected university art museums.

Croft says the Fellowship is one of the highlights of her career. “It is an acknowledgement of my work over the past three decades which has led me to what I am doing now and will provide me with much appreciated creative freedom over the next two years.”

Croft was one of ten Indigenous artists who founded the influential Boomalli Aboriginal Artists Co-operative and was its general manager from 1990-1996.