Opinion Streets of Papunya delivers an artistic renaissance worth celebrating

The exhibition 'Streets of Papunya' is a revelation of the power of art and its ability to transform a community, writes Joanna Mendelssohn. 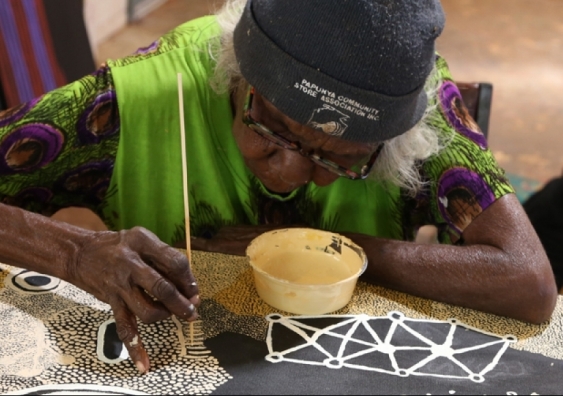 OPINION: The breadth and depth of creativity in the exhibition, Streets of Papunya: the re-invention of Papunya painting, which has just begun its national tour at UNSW Galleries in Sydney, is a revelation of the power of art and its ability to transform a community.

The name “Papunya” may confuse visitors as this not an exhibition of the 1970s Papunya Tula movement, but rather a celebration of the artistic renaissance that has occurred at Papunya, north-west of Alice Springs, since the Papunya Tjupi Arts Centre was established in 2007.

The original Papunya Tula art movement arose from a situation where a number of different language, and therefore sometimes quite hostile, cultural groups were placed at Papunya township at the geographical heart of Australia. Here, with the encouragement of a young art teacher, Geoffrey Bardon, senior men together painted a giant Honey Ant muralon the school wall.

According to the mythology, an art movement was therefore born. After the Pintupi people, one of the six different language groups represented in the original Papunya Tula, left for Kintore in 1981 their artists took the name with them. This decision has caused no end of confusion as the town remained next to the honey ant hills, whose name is Papunya.

Vivien Johnson’s great achievement both in curating this exhibition and in the accompanying book (2015), is the way she has incorporated both her original scholarly discipline of sociology, with its restrained, ethical, observational approach, and her later curatorial and educational disciplines. Because of circumstance, she has become the most significant curator associated with Papunya artists, but Johnson has an uncanny ability to see the larger picture.

The current exhibition is one of many she has curated for the benefit of the people of Central Australia and the wider community. Non-curatorial projects include Storylines(2007-2009) which, with Tess Allas and Laura Fisher, recorded the lives and art of Aboriginal artists below the Rowley line.

In 2003, at the request of the dying Australian art historian Joan Kerr (1938-2004), Johnson became the first nurturing editor in chief of the Dictionary of Australian Artists Online. What is less well-known, and not mentioned in any publicity material, is that after leaving her academic post, Johnson retrained as an elementary school teacher in the Northern Territory, thus enabling her to work more effectively with the Papunya community.

It is this rare combination of academic and community knowledge that enables Johnson to, very politely, correct past errors and create a narrative of a continuing tradition of Papunya-based artists. The honey ant hills of Papunya is a site of great cultural significance, the source which must be acknowledged.

ancestral power inheres in the landscape from past events.

The subject of the mural, and the fact that it was painted by people from different cultures, was in itself a sign that something big was underway in 1971. Papunya’s other art history is one that continues to resonate with Aboriginal people. It was here, in his wife’s county, that Albert Namatjira stayed when he was falsely “imprisoned”, and here he painted his last works. Some of his descendants still live at Papunya.

Then there is the issue of gender. The artists celebrated in Papunya Tula are male, but the strength of the exhibition and the book is that the new art made at the Papunya Tjupi community arts centre is dominated by women. Some senior women are widows or children of the original Papunya Tula artists, while others are related.

This is where the visitor finds herself constantly referring to the complex family-tree diagram which is at the centre of the exhibition – but it is easier just to say that everyone is connected.

So how did it happen that awkward relations in the 1960s should turn into proof of the interconnectedness of all things by the early 21st century?

First, intermarriage between different kinship groups has traditionally served as a way of diffusing hostilities, of ensuring that, with the passage of time, differences will be smoothed over. In addition, the folly of western-style art history is that a single artist is usually named as the sole creator. In the past, in collaborative works, male art advisers had assumed the author was male, so wives and children of well-known artists had their contribution discounted.

Works by senior men including Warangkula Tjupurrula andLimpi Puntungka Tjapangati are in the centre of the room as a reflection of history. The focus, however, is on the women who are the driving force in the community, the keepers of lore. These include Candy Nelson Nakamarra, Beyula Puntungka Napanangka, and Mary Roberts Nakamarra.

Some of the senior women, the keepers of culture, Martha McDonald Napaltjarri, Tilau Nangala and Daisy Leura, are widows, while others are children of earlier artists.

The reason Papunya Tjupi artists give when asked why they make art is that it is “for the children”.

Both the exhibition and the book are expressions of the same urgent purpose. Succeeding generations need to know where they are placed in the unfolding grand narrative of Aboriginal art. Those of us who are not Aboriginal need to understand the complex relationship between settler Australians and the people of the land. Children who are yet to be born need to know their place in the never-ending story.

The creation of Papunya Tjupi is a result of the foresight of two of the founding artists, Michael Nelson and Long Jack Phillipus. By 2005, for a number of not particularly edifying reasons, the town of Papunuya was was in decline.

In 2005 Nelson and Phillipus approached Johnson for help; she was able to forge a relationship with UNSW’s College of Fine Arts, where she had recently been appointed research professor. Johnson and other staff, especially the master printmaker Michael Kempson, worked with artists both in Papunya and in Sydney to create fundraising exhibitions and artists workshops, to build the arts centre, to transform the community.

Streets of Papunya is a celebration and an explanation of their achievement.

The exhibition entrance honours the older work of Namatjira and the first Papunya artists. Surrounding these are the paintings by the women who stepped forth. There are too many outstanding works to name, but Isobel Gorey Nambajimba’s delicate white tracery (with a flash of ochre) is so beautiful and so strong it sends shivers up my spine.

At its heart, in the very centre of the exhibition, are books written by the community to tell their stories as well as two videos showing the pride of people in their place and the next generation. All these changes have been enabled through art and education, by visitors respectfully working with the community towards a common good.

That model is well worth supporting.

Indigenous art the turning point for how Australians see themselves