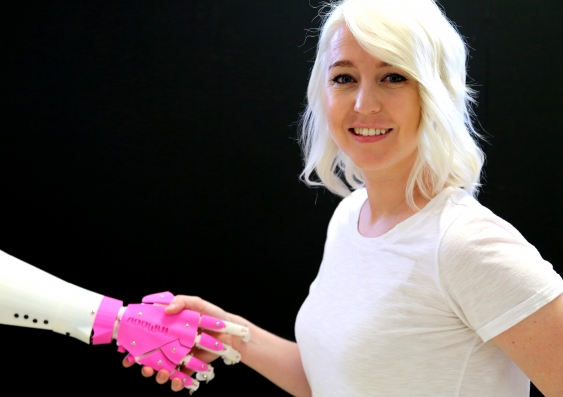 Social Robotics: Movement Design for Human-Robot Interaction (HRI) at UNSW Art & Design introduces students to the field of Social Robotics through the use of animation, movement experiments and the exploration of affective processes in HRI.

Currently, the Interdisciplinary Center Herzliya Israel and The American University of Paris are the only universities to offer undergraduate Social Robotics courses.

“Robots will work with humans, they won’t replace them. People tend to see human–robot relationships in a binary way – as ‘us and them’ or they fear that robots will take over the world, but what we’re seeing in our research is that the role of robots in everyday life can be both integrated and collaborative.”

Dunstan spent time in Japan earlier this year working with the Fuji Xerox Research and Technology Group in Yokohama, where she developed case studies of new robot aesthetics to be implemented within office environments.

She says the subject, which will be offered to all UNSW undergraduate students, aims to challenge students’ pre-conceived notions of what robots should look like, and their potential applications.

“In the past, designing robots that read and emit social cues has generally been done by making them look like humans or animals, but the end result is often just a disappointing version of a dog or an ‘uncanny’ version of a human. This course aims to use human movement and social cues as a starting point to build prototypes that don’t necessarily look like a typical robot,” she says.

Steve Weymouth, Media Arts lecturer and course co-convenor at UNSW Art & Design, will teach the animation stream of the course, which will help students build human characteristics into their robots.

“Eliciting an emotional response has more to do with how an object moves than how it looks,” he says, describing characters like Pixar’s Wall-e, an animated robot that engages with viewers emotionally through using human-like gestures and movement.

“Learning about animation will help students think with a 3D mentality and consider posture and pose and how they can be used to suggest character and emotion,” he says.

Students will generate movement experiments in physical prototypes that could be manifest as 3D CGI virtual representations, physical robots or 3D printed forms.

The undergraduate general elective course will also explore the history of automata, robots and cyborgs through science fiction literature and real-world contemporary robotics research leading to the advent of Social Robotics and HRI.

Dunstan says she hopes the multidisciplinary nature of the course will attract students from across UNSW.

“Whether students are coders, engineers, artists or social scientists, we want them to bring whatever they have in their toolkit to the course,” she says.

Social Robotics: Movement Design for Human-Robot Interaction (HRI) will run for the first time as a two-week intensive course from 23 January – 9 February 2017. It will be offered again in Semester Two, 2017.