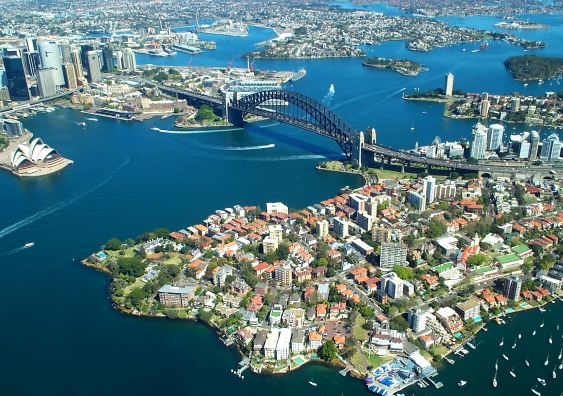 Delivering the Annual Paul Reid Lecture in Urban Design, the first Utzon Lecture for 2016, the architect and urban designer discussed the 20 years of her career that has focused on Sydney Harbour.

As Sydney Harbour Foreshore Authority’s former Executive Director of Place Development and Deputy Government Architect, Professor Lochhead worked on major regeneration projects at Circular Quay and the Bays Precinct, and was instrumental in shaping major landscapes around the Harbour, including the development of a 30-year plan for the transformation of Sydney Cove, the gateway to Sydney’s CBD, and a new strategic vision for the iconic waterway.

“As a consequence of this long association with the Harbour, I have developed a considerable understanding of this unique place – its attributes, its challenges and its possibilities,” she told the capacity audience.

Professor Lochhead described the sometimes frustrating urban planning process behind some of the developments around Sydney’s 320 km shoreline. 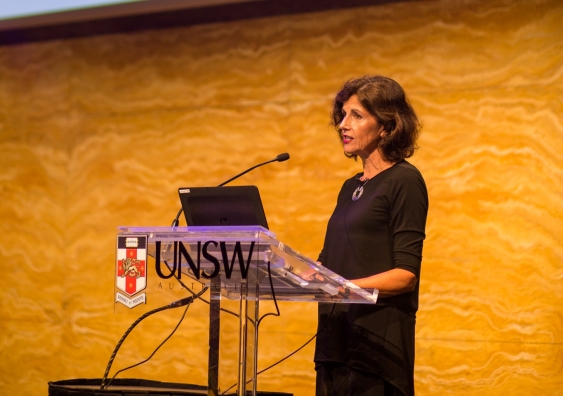 “Often, great initiatives never see the light of day, great ideas resurface again and again before the timing is right to be implemented, and sadly but more frequently, an outcome that is less than ideal wins the day.

“Over 20 years, I have been instrumental in shaping more places around Sydney Harbour than most. Many have been realised, but just as many remain in the bottom drawer, shelf-ready should the political winds change,” Professor Lochhead said.

One of her most significant roles was as part of the Sydney Harbour Design Review Panel established in 1997, to lift the design standards of strategic sites around the Harbour, including Walsh Bay.

“We established and applied consistent design principles that responded to the character of the harbour landscape, ecology, and terrain, by scaling-down new development so that views and the waterfront were public and accessible to all.”

In a wide-ranging address, Professor Lochhead discussed the history of the harbour since European settlement, including the demolition of slums in The Rocks after plague outbreaks in the early 1900s, and applauded the public and professionals who had been outspoken enough to suggest alternatives throughout the harbour’s development.

“If anything visionary and lasting is to happen at Circular Quay, there will need to be a change in how decisions are made regarding the area. Otherwise ‘tinkering’ will continue to be the fate of this magnificent public place.”

“The provocateurs and civic conscience safeguarding the genius loci of Sydney Harbour, have often been architects, planners and conservationists – including resident action groups, greenies and unions – who have not only challenged the prevailing opinions but proposed alternative ideas.”

Discussing the future of Circular Quay, Professor Lochhead lamented the lack of integrated governance safeguarding these important places around the harbour.

“Let’s hope the future of Circular Quay is not just a future of irregular upgrade works and clean-ups – as the carefully considered design concepts laid in place over the years gradually become worn by the incremental accretions of third rate retailers and uncooperative authorities.

“If anything visionary and lasting is to happen at Circular Quay, there will need to be a change in how decisions are made regarding the area. Otherwise ‘tinkering’ will continue to be the fate of this magnificent public place.”

Professor Lochhead stressed strategic investment by the government, the power of social activism combined with conscious design have made the harbour Sydney’s “only truly great public space.”

“So let’s continue to counter predictable paradigms and reimagine the harbour city we want,” she concluded.

The evening finished with the opening of the MUDD21 exhibition. The exhibition is a showcase of works by graduating students from UNSW’s Master of Urban Development & Design Program (MUDD).

About the Annual Paul Reid Lecture: The lecture honours Professor Paul Reid (1933-2001) a former UNSW Professor of Architecture and founding member of the MUDD program. It is delivered as part of UNSW’s Utzon Lecture series which was officially launched six years ago by Jan Utzon, the son of the renowned Danish architect Jørn Utzon. Held monthly at UNSW, the series focuses on the presentation of ideas from leading contributors of international significance in the design, delivery and management of the built environment.

Read an edited excerpt of Reimagining the Harbour City at The Conversation.