A wooden skyscraper? How does that work?

The 'plyscraper' is the product of breakthroughs in materials and the desire for sustainable urban living, says Dr Philip Oldfield, Associate Professor in UNSW’s Faculty of Built Environment. 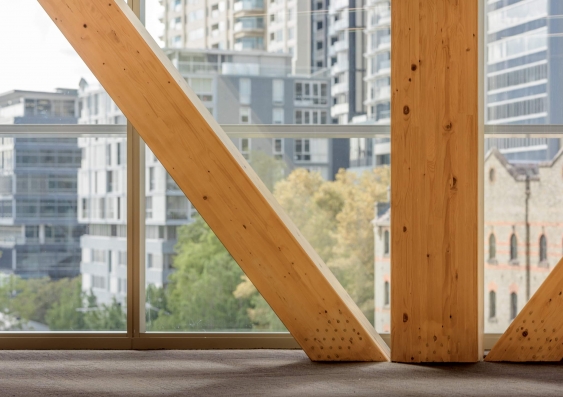 Buildings like International House Sydney, which is built out of timber, are a blueprint for what is possible. Photo: Ben Guthrie

It might sound like a 21st-century version of Three Little Pigs, but these mighty wooden constructions are as strong as their steel counterparts – and won’t blow down in the wind.

Phillip Oldfield: A breakthrough is the manufacture of extremely strong wood known as ‘mass timber’ which can be equally as strong as conventional building materials such as steel. Mass timber involves laminating strips of wood together, gluing them at right angles under extreme pressure to form giant timber beams, walls or columns. The timber pieces are typically up to 40cm thick, but they could be up to 2.5m thick and 2.5m wide. Builders are increasingly considering this heavy-duty engineered timber in multi-storey buildings, prompting the name ‘plyscrapers’.

BH: Are they safe?

PO: Although it sounds unlikely, this engineered wood can be just as safe as conventional materials in a fire. Steel starts to lose its strength at 550°C, and after that it will just buckle and collapse – which is why we protect steel structures. By contrast, engineered timber can be manufactured so that the exterior chars, leaving the core of beams and columns intact. If people are inside the burning building, they will have adequate time to get out.

BH: Are there many ‘plyscrapers’?

PO: International House Sydney in Barangaroo South is one of Australia’s tallest timber commercial buildings. It was designed by Alec Tzannes, former Dean of UNSW Built Environment and one of Australia’s most respected architects, and Jonathan Evans, a Director at Tzannes. The soaring, light-filled space with its colonnade of recycled iron bark timber is a hymn of praise to wood.

The mass timber panels, grown in sustainable forests in Austria, were prefabricated, shipped to Australia, then slotted and screwed into place by a small construction team.

Buildings like International House Sydney, Forte Apartments in Melbourne, and the recently completed 25 King Street in Brisbane, which are also built out of timber, are a blueprint for what is possible.

In my book The Sustainable Tall Building you’ll find similar innovations such as a visionary plan for an 85-storey timber tower in London, a sun-splashed vertical university in a New York skyscraper, and a seven-tower residential block in Singapore linked with green walkways, that includes a sky-high running track, a children’s playground and lush hanging gardens.

BH: How are plyscrapers more sustainable?

PO: Timber benefits from having a much lower level of ‘embodied carbon’ than conventional materials, making it far more environmentally friendly. This happens because trees absorb carbon dioxide from the air through photosynthesis, and so timber has the ability to store carbon and remove it from the atmosphere.

My research suggests that building a tower in Sydney from timber, instead of concrete for example, could save more than 50% of its embodied carbon. So, if we build towers out of timber, we can dramatically reduce their carbon footprint, creating sustainable powerhouses.

These new high-rises are going to totally transform buildings that have traditionally been seen as gas guzzlers. Instead of air-conditioned boxes, we will be seeing much friendlier buildings that are more generous to the environment. Natural materials provide a warmth that concrete and steel struggle to achieve.

BH: When did your interest in skyscrapers start?

PO: I became fascinated with skyscrapers as a student of architecture travelling the world. I was always interested in tall buildings, but they left me cold. All I saw was monotony, big glass boxes.

As I studied architecture, I grew increasingly aware of the challenges of climate change and population growth, and became part of a movement to design tall buildings that are sustainable, green and attractive to live in.

Curious Kids: what's the tallest skyscraper it's possible to build?