It is infantile for artists in the Biennale to pick on Trasnfield Holdings because of its contract to operate a detention centre on Manus Island if they ignore the central role the Australian government plays in directing the entire operation, writes Joanna Mendelssohn. 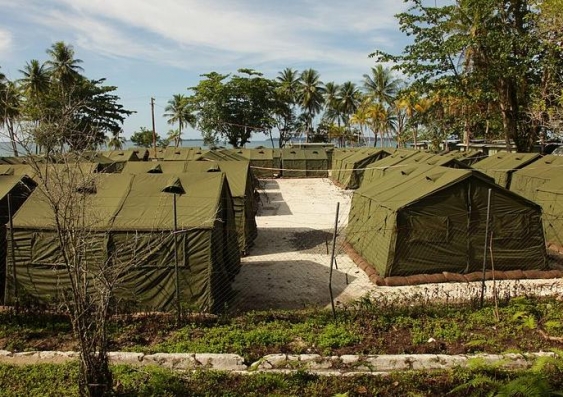 OPINION: The Biennale of Sydney, which begins on March 21, has announced it will sever ties with its founding partner Transfield, following weeks of pressure from artists angered by the company’s links to Australia’s offshore detention centres.

Luca Belgiorno-Nettis, director of Transfield Holdings, has also resigned as chairman of the event.

Nine Australian and international artists, including Olafur Olafsson, had pulled out from the Biennale in protest at the event’s sponsorship deal with Transfield Holdings. The company has a stake in Transfield Services, which was recently granted a contract last week to operate a detention centre on Manus Island.

How the event will be funded going forward is now unclear.

In its statement, the Biennale board said:

We have listened to the artists who are the heart of the Biennale and have decided to end our partnership with Transfield effective immediately.

The original Transfield, under its founder Franco Belgiorno-Nettis, initiated the Biennale in 1973. The first Biennale was at the Sydney Opera House as a part of the opening ceremonies. It was opened by Prime Minister Gough Whitlam who had not been invited to the Opera House opening by the Queen (NSW had a Liberal government, enough said).

It is fair to say that Franco Belgiorno-Nettis was able to leverage his patronage of the Biennale and other cultural activities to foster informal connections to the most powerful people in the country. Transfield was then a construction company, pure and simple (it was one of the joint venturers to build the Sydney Harbour Tunnel) .

Connections are, after all, one of the reasons for arts patronage. The subtle patrons use their connections well. The great value of visual arts events is that it is easy to have conversations while looking at art – opera and theatre tend to demand silence except at interval. This is different from crude acts of sponsorship such as those by large mining or oil companies which use the arts to polish their corporate image.

Time has moved on. Franco died eight years ago. Transfield is now a very large and complex series of companies. Luca Belgiorno-Nettis is a director of Transfield Holdings. Transfield Services, the company that is now operating some of Australia’s detention camps, is a separate subsidiary.

Luca Belgiorno-Nettis is not a part of Transfield Services. He is by any measure a major patron of the arts on a personal level and one of the great subtle thinkers in modern Australia. He is behind the newDemocracy Foundation, which aims to create a climate of intelligent debate and decision-making in this country.

In what can only be described as one of life’s little ironies “intelligent debate” has not been one of the characteristics of the current controversy.

As well as Transfield, the major supporter of the Biennale of Sydney is the Australia Council. While it participated in the 1973 exhibition, its significant financial support dates from the second Biennale in 1976 (for some years Sydney had the only Biennale in the world that ran once every three years). The Australia Council develops its policies at arms length from government but it remains wholly funded by the Australian Government.

In a very real sense, artists receiving Australia Council money are taking government money. So from my perspective it is quite reasonable for non-Australian artists to be so appalled by the acts of both the Australian government and their contractors that they remove themselves from the Biennale. It is reasonable to assume they would not know that our government runs concentration camps in our name, and has done so for many years.

However their protest will be somewhat hypocritical if they renew their connection with the Biennale now that Transfield has left. This is especially as Luca’s brother, Guido Belgiorno-Nettis, also a director of Transfield Holdings, is the President of the Trustees of the Art Gallery of New South Wales, the principal venue for the Biennale.

Australian artists are in a different category. Australia has been imprisoning refugees since 1992, shortly after the first Iraq War. In 2001 the Tampa election made hostility to those fleeing conflict official policy.

As an aside, it’s worth remembering also that Santos and ARCO became major sponsors of state government art galleries in the late 1980s and early 1990s, just as mega-exploration was taking off. In the catalogue of Balance 1990, Queensland Art Gallery’s seminal exhibition of Aboriginal art, ARCO Coal Australia Inc. is “thanked for its substantial financial support which enabled works to be purchased directly from artists during the tour to remote areas”. Whenever those now iconic works of art are reproduced or are on view, ARCO’s support is honoured.

The last election confirmed that both major political parties have lost their moral compass. The current mood by people of good will is despair.

It would be good to see artists in the Biennale use their position to foster a conversation on what is happening in Australia now. It is however silly and infantile to pick on one holding company of one of the camp operators while ignoring the central role of the Australian government which is directing the whole disaster.

I would have thought the intelligent response for local artists would be to make works that reflect the dilemma of people living in a country once thought of as a utopia but is now transforming itself into a dystopia. Take their money and use it to do good.

One of the big issues that is not being discussed here is that our government is effectively outsourcing many of the operations that have traditionally been a part of the core business of governing. It is fairly clear, from the amounts of money being thrown around, that they aren’t doing this as a cost-saving activity.

Rather it is clear that by outsourcing the more distasteful aspects of government they are setting up private companies as future scapegoats, and in doing so hoping to avoid the consequences of their own decisions.

I’d also like to emphasise that as well as being committed to maintaining their father’s initiative in giving Australia a place in the contemporary art scene, the next generation of the Belgiorno-Nettis family have a personal passionate involvement in the arts. Luca’s wife, Anita, was the executive producer for the film The Black Balloon (2008), Elissa Down’s film about autism and teenage love. Look closely at the opening scene.

A middled aged couple are walking their dog, and look at the family moving in across the road. The couple are Anita and Luca doing an Alfred Hitchcock moment.