Mentored by a master

For a group of final-year media students the chance to collaborate with world renowned photographer, William Yang, has been the highlight of their degree. 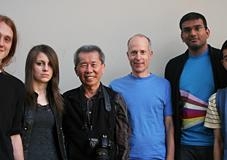 A group of third-year Media and Communications students has spent their final semester working with internationally renowned artist and photographer William Yang.

Yang, renowned for his performances that combine photography with personal monologues, took up a visiting fellowship in the School of English Media and Performing Arts (EMPA) earlier this year.

He is using the fellowship to digitise and transform seven of his existing performances to a small screen format for educational use.

The students spent 10 weeks filming and editing one of Yang's most famous performance pieces, Blood Links (1999), which traces the migration of the photographer's family from China to Australia over a century ago.

"This was a huge project, I basically asked the students to make and edit a film in one semester, but they were enthusiastic, smart and just lovely to work with," said Yang.

"The filmed versions of my performances will be archival but most importantly, educational - and people can teach from them."

Ralph Stevenson, who created animations of Yang's family tree for Blood Links with fellow student Jeremy Chan, had wanted to work with the photographer since studying his work in an English course.

"A standard arts student gripe is that we don't get the chance to physically engage with what we're studying, but this gave us that opportunity," Ralph said, describing Yang as a warm, approachable and professional mentor.

"The first thing he did was invite us to his house for dinner and then performed Blood Links in his lounge room for us, now that's an experience you'd never expect to have as part of your undergraduate degree," said Stevenson.

The students will be given full credits on the completed version of Blood Links.