Opinion We’re all going on a summer (art blockbuster) holiday

This summer, art lovers can pick and choose from blockbuster exhibitions across the country, writes Joanna Mendelssohn. 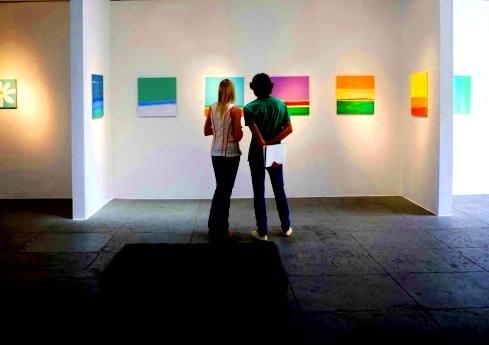 OPINION: I still remember my first blockbuster art exhibition. Two Decades of American Painting came to Australia under the auspices of New York’s Museum of Modern Art in 1967.

This summer, art lovers can pick and choose from blockbuster exhibitions across the country. Pop art lovers can visit the Art Gallery of NSW. There are big shows for fans of fashion, there are international shows that are stopping in Australia as part of a world tour, and in Tasmania, there is a splashy mind-blower dedicated to the work of American artist Matthew Barney.

That 1967 show dedicated to American painting was large and raw and modern. It was so crowded on the Sunday that my family queued in the sun while waiting to go inside. I played hookey from school the following week so I could see it without the crowd.

Then there was the entrance. Before it was rebuilt in 1972 the Art Gallery of NSW had no storage, so the travelling crates were stacked on the front portico. Visitors entered through a sea of blue boxes, all labelled with the exotic MOMA stamp.

It was a brave decision for the International Council of MOMA to send such magnificent art to a country where none of the local art museums had air conditioning. (The National Gallery of Victoria’s St Kilda road building did not open until 1968.) There is little doubt that the experience of seeing the quality of the exhibition (including the catalogue) galvanised a generation of artists, curators, art historians and art lovers.

Times have changed and the country is now almost unrecognisable from that provincial destination of so long ago. Every city, both state capitals and regional centres, has places where art can be seen on public view. Some, especially Canberra’s National Gallery of Australia, have very distinguished collections indeed.

Largely thanks to the efforts of bodies such as the Australia Council, the audience for art has grown at a far greater pace than the population. Summer is the season where most Australians travel which is why the increasingly self-funded art museums see it as the “hot-spot” on their scheduling.

Marketing departments and tourism authorities know art is a cost effective sponsorship deal, so their Holy Grail is to find a ticketed exhibition so grand in concept that it will lead to overcrowding inside and long queues.

A crowded blockbuster means interstate flights, full hotels and busy restaurants. Despite the growth of international tourists, the bulk of cultural tourists are domestic travellers.

It is an article of faith among marketeers that Australians will travel to see exhibitions of any culture but their own and therefore Australian art is excluded from the schedule. Popular scholarly Australian exhibitions, such as Golden Summerswhich toured the country from 1985 to 1987, or last year’s Sydney Moderns, are seen as some kind of anomaly.

There are a few exceptions to this. The National Gallery of Australia showed the first National Indigenous Art Triennialover the summer of 2007, but did not repeat the schedule for the second.

Last year this blind faith in the value of import spectacularly backfired on Destinations NSW and the Art Gallery of NSW whenAmerica: painting a nation proved to be a summer dud, and visitor numbers were down. Perhaps a lesson has been learnt.

This year Destinations NSW has sponsored two major exhibitions: Chuck Close at the Museum of Contemporary Art, a local rejig of an existing exhibition by the American photorealist and Pop to Popism at the Art Gallery of NSW.

Finally “international” is being used as a term to describe something that crosses nationalities, instead of its cringe usage – “from outside Australia”. Pop to Popism draws on major works from artists who worked in the UK, USA, Europe and Australia. The curator, Wayne Tunnicliffe, is head of Australian art at the Art Gallery of NSW so this is totally a local production.

Other states seem still stuck on the travelling show. The beleaguered Art Gallery of Western Australia has picked upTreasures of the Jewish Ghetto of Venice, which is unlikely to be a large crowd-pleaser. On the other hand, the individual objects are very beautiful and one of the consoling aspects of unpopular exhibitions is the chance to enjoy art without a crowd.

South Australia (Fashion Icons: Masterpieces from the collection of the Musée des Arts Décoratifs, Paris), Melbourne (The Fashion world of Jean Paul Gaultier) and Queensland (Future Beauty: 30 years of Japanese Fashion) have picked up on the fashion for clothing as art. The National Gallery of Australia has returned to the proven allure of fin de siecle France with Impressions of Paris which it is balancing with the avant garde James Turrell retrospective.

The Turrell looks like being an exceptionally thoughtful exhibition, a more meditative experience than the season’s one genuine mind-blowing blockbuster.

With a flair (and budget) that makes those working in the public sector deeply envious, Hobart’s MONA is showing Matthew Barney’s baroque extravaganza, River of Fundament. The artifacts created for the epic film are shown with some of David Walsh’s Egyptian collection. Culturally this is a great fit with both Walsh and Barney sharing a mutual interest in sex, death and coprophilia.

Tourists come to Hobart, to MONA, to be both shocked and stimulated. This year they will get both in spades – and the Tasmanian tourist authorities could not be happier.

Joanna Mendelssohn is an Associate Professor, Art & Design at UNSW.

Art out of the wilderness: Turner exhibition shows how far we’ve come