After years of negotiation, artist and COFA Dean, Ian Howard, has gained access to the highly militarised North Korean–Chinese border to document its history. 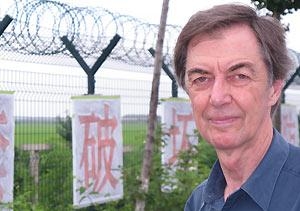 Ian Howard at the North Korean border with his sign rubbings

After years of negotiation, artist and COFA Dean, Ian Howard, has gained access to the highly militarised North Korean–Chinese border to document its history.

Drawn to the area because of his long-held interest in the relationship between civil and military cultures, Professor Howard used persistence in the face of “Orwellian” bureaucracy to gain access to the border.

He creates his artworks by positioning canvases against natural and man-made objects and “rubbing” with wax and crayon to create a life-sized record.

“The importance of rubbings is that producing them is like archaeology,” said Professor Howard. “You’re working with an extraordinary object with the intention of bringing it back to the gallery. The better you want the artwork to be, the higher the risk.”

The volcanic terrain of the disputed Changbai Mountain border and the twisted metal of a Dandong bridge bombed during the Korean War provided key rubbing sites.

Filmmaker Ian Lang, Honorary Professor of Media at the University of Melbourne travelled with Professor Howard to film a documentary about the project. He said the trip was high risk.

“I had to get good documentation fast because we couldn't be sure how people felt about us turning the cameras on them," he said. “We wanted to put the art in its landscape context, no spin, just the reality of it.”

A team from Shenyang’s Luxun Academy of Fine Arts (LAFA) assisted Professor Howard with the rubbings. COFA and LAFA have collaborated on numerous Australian–Chinese art projects.

Professor Howard has spent most of his artistic career documenting military borders beginning with the Berlin Wall in 1968, the Great Wall in 2000 and most recently, the Israeli barrier that separates the West Bank from Jerusalem.

His rubbing of the Enola Gay, the B29 Flying Fortress that dropped the atom bomb on Hiroshima, is currently on display at the Art Gallery of New South Wales.

An exhibition of the artworks, Borderline Art, and the accompanying documentary, will be on show at Sydney’s Watters Gallery early next year.

Watch the documentary trailer on UNSWTV.