Opinion Rushing towards the Moderns

Dominated by women and colour, the Art Gallery of NSW's latest exhibition displays the kind of art once regarded by the establishment as too decorative, writes Joanna Mendelssohn. 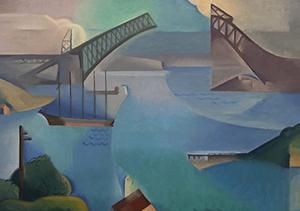 OPINION: When Australian artist Lionel Lindsay wrote Addled Art, his polemic against modernism, he found one aspect of the new brash art world worth valuing. The way some artists had liberated colour was so enticing that he had to recognise the power and beauty of their art despite his instincts. But then he added:

Today there are more women than men painters. They have more leisure, and the superficial nature of modern painting attracts their light hands: picture or hat, all is one.

The Art Gallery of NSW’s latest exhibition, Sydney Moderns: art for a new world is dominated by both women and colour. It is the art that the conservative establishment regarded as too decorative to be seen as a part of the canon of art history. But now these are the images of the past that we find most enticing, most evocative of the mood of the fashionable fragile world between wars.

There is a parallel here. In Melbourne in the late 19th century, the artists we now call impressionists were also condemned by a conservative establishment. In 1985 Jane Clark and the late Bridget Whitelaw teased out that era with Golden Summers, our first locally grown blockbuster exhibition. It became the most popular exhibition of Australian art this country has ever seen.

Sydney Moderns is like Golden Summers in that it brilliantly defines a time, a place, and a culture in transition. It is also like Golden Summers in that it is the product of a team of scholarly collaborators: Deborah Edwards and her co-curator Denise Mimmochi have been assisted by many of the leading scholars in the field so that the exhibition and its substantial catalogue are an outstanding curatorial achievement.

The connections between art and design in this brittle world are made clear. The architecture of the growing Sydney Harbour Bridge becomes an obsessive icon as it rises over the city, and is a major subject for established artists like Roland Wakelin and Jessie Traill. But the images that most effectively define the new world rising are those painted by the so-called lady amateur Grace Cossington Smith, whose art remained in obscurity for many years. From the soaring arch of The Bridge in Curve to the spiritual epiphany of The Lacquer Room, she is the artist whose unerring colour sense and understanding of form colours every memory.

The close connection between photography, fashion, advertising is demonstrated by the publication of The Home, one of the truly great fashion magazines of all time. There is a magnificent display of covers of The Home from its heyday of the 1920s.

The Home was published by Art in Australia, with the close involvement of Charles Lloyd Jones who understood that a cutting edge fashion and design magazine wouldn’t hurt sales in his department store. Its life was brief. The Home burst into print with the energy unleashed by the end of World War One, and limped to oblivion during the Great Depression. It brought together fashion, interior design and high art all in one elegantly designed package.

The achievement of the curators is underlined by the absurdly short lead-in time they were given. Most major exhibitions are three, four or even five years in the planning. Sydney Moderns had eighteen months. Bearing in mind that public galleries insist on at least twelve months formal written notice for any loan request, the real planning time for the exhibition was less than six months. It is fortunate that the Art Gallery Society agreed to sponsor it as a part of its 60th birthday celebrations as it would have otherwise been very hard to find a major sponsor at such short notice.

Without a proper lead in time it was not possible to consider touring the exhibition to other state galleries as they had already locked in their schedules. Confining the exhibition to Sydney is a real loss as it is enticingly beautiful, presenting a brilliant narrative of an emerging fashionable feminine culture to counter Australia’s more common masculine self-image. It is also the visual history of a city’s interpretation of its past modern life.

If it had been appropriately scheduled Sydney Moderns could have been the finest advertisement for NSW tourism as well as being a blockbuster exhibition to equal Golden Summers. For those from other states who have the time and money to travel, it is well worth the journey. For those who can make it, it is worth multiple visits to get the full richness of the experience.

This opinion piece was first publshed in The Conversation.

Why are so many arts organisations run by blokes?