The consequences of Brexit mean Australian exporters need to stop focusing on Britain and think more about Europe. 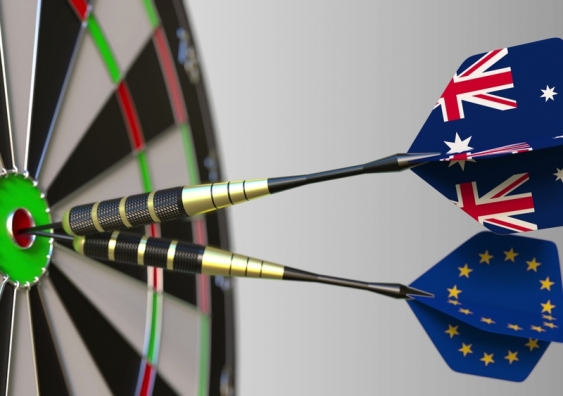 The consequence of Brexit could be that Australia starts to hit the bullseye in terms of increased trade directly with the EU. Image from Shutterstock

It has been called “the Kylie effect”, after one of Australia’s most famous exports.

It is the path taken by Australians wanting to crack the big time in Britain. Long before pop princess Kylie Minogue hit the stage, indeed, the path was well-worn – including by bands like the Easybeats and AC/DC, and writers like Germaine Greer and Clive James.

Just as with talented Australians, so too with Australian businesses. They set their sights firmly on the British market. London becomes their second home. “The continent” is something that only looks inviting once they’ve made it in Old Blighty. Most of Europe remains largely unexplored territory.

But the slow-moving car crash of Brexit suggests Australian companies need to stop focusing only on topping the British pops and think about Eurovision.

This is hardly surprising given Australia’s strong historical ties with Britain. We share a common language and cultural, legal and political traditions. Britain was our number one trading partner until 1966 (when Japan overtook it). It remains among our top 20 partners when most the other spots have been taken by Asian neighbours.

Relations with Europe haven’t been helped by some historical animosity over contentious trade issues like the extravagant agricultural subsidies paid within the European Union. These have been seen as against the interests of Australian farmers. It was once said that for the cost of the European Union’s Common Agricultural Policy you could send all the French cows around the world business class twice.

One reason for establishing the EU-Australia Leadership Forum (which had its first meeting in June 2017) is to get past these issues and have a broader conversation focused on other promising areas of collaboration.

What happens when you impose Brexit on this scenario?

Britain’s withdrawal from the European Union is (as Pascal Lamy, the former director general of the World Trade Organisation, was fond of saying) a bit like separating the yolk from the white after making an omelette.

But the democratic process by which it was decided must be respected, even if increasing numbers of the British public realising how high the divorce bill is going to be.

Right now it appears there appears to be no acceptable divorce deal in place. The British government has negotiated a deal with the EU that prime pinister Theresa May says is “the best deal available”, but it is unacceptable to the majority of Parliament.

So May has to head back to Brussels “cap in hand” to seek a better deal. If that fails, Britain could be headed for an economically disruptive “no deal” Brexit by the end of March 2019.

As a result the British Treasury and the Bank of England fear Britain might be plunged into its deepest recession in nearly a century. The Bank of England has warned the economy could shrink by as much as 8%, with unemployment and inflation soaring.

In some ways the European Union is in a dilemma. It wants to make separation hard for British to discourage other countries to follow. At same time it doesn’t want to weaken the British economy as that could also hurt Europe and the global economy.

Nor is Brexit the only issue for the EU to worry about. There are big challenges in Italy, Hungary, Austria and Poland. And then there’s Russia.

The European project began with the best of intentions. It was set up to prevent another war between France and Germany, and to create lasting peace and economic stability in Europe. This has largely been achieved.

But as the project evolved it became a question of how far you take a customs union and expand it to include a common currency, central bank and foreign policy. As much as European unity is desirable, it has it limits. National identity still trumps it. As journalist Mark Kenny once noted, “Australia can enter the Eurovision song contest, but Europe can’t.”

Though the headlines about Brexit seem pretty grim for Britain, it will continue to remain an obvious market for Australian exporters.

But Europe is clearly becoming more important. Indeed, according to the DHL Export Barometer, which surveys exporters around Australia about conditions affecting their global business prospects) 17% see Europe as their most desirable new territory. In second place is Southeast Asia (15%). Britain ranks with Indonesia and Japan (11% each).

As Australia has a free trade agreement by another name (a Comprehensive Economic Partnership) with Japan, and is about to sign one with Indonesia, there is a strong case now to complete deals with the European Union and Britain.

The true irony might be that Brexit turns our long-standing Europhobia into giving us Eurovision.