Looking graphically at actual and forecast GDP makes it clear why some speak of a 'V-shaped recovery'. But even the fairly bullish assumptions reveal a recovery where the V isn’t really sharp enough. 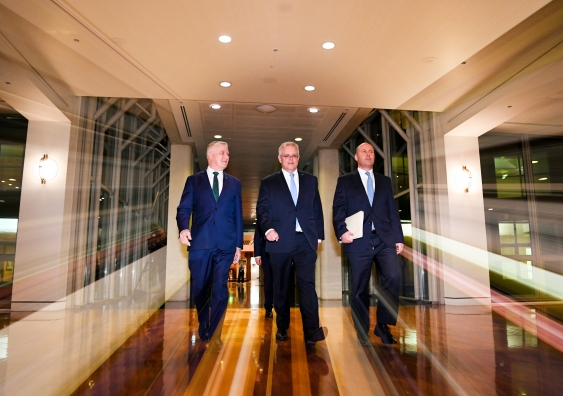 Real GDP growth is expected to rebound to 4.25 per cent in 2021-22 and then settle down to about 2.5 per cent thereafter. Photo: Lukas Coch/AAP

I don’t often feel sorry for politicians. But having to manage a process that produces forecasts about the next four years of an economy still clawing its way out of a pandemic, and then having to publicly defend those forecasts, is no easy task.

That said, our compassion for the plight of Treasurer Josh Frydenberg shouldn’t stop us judging his budget forecasts. And, like all forecasts, those rest heavily on the assumptions that underpin them.

The core budget assumptions about unemployment and economic growth are relatively rosy. Unemployment is forecast to be down to 4.75 per cent by 2022-23 and 4.5 per cent the year after – both well below pre-pandemic levels.

Real GDP growth is expected to rebound to 4.25 per cent in 2021-22 and then settle down to about 2.5 per cent thereafter. Given we are unlikely to have the population growth of the pre-COVID era, that’s a pretty high rate.

Taking a look graphically at actual and forecast GDP makes it clear why folks are talking about a “V-shaped recovery”. But even the fairly bullish assumptions reveal a recovery where the V isn’t really sharp enough. Call it a “floppy-V-shaped recovery”.

That’s rather disappointing, especially given Frydenberg has fundamentally shifted Liberal party fiscal strategy away from “debt and deficits” and dalliances with austerity, to one that sees government spending at more than 26 per cent of GDP in steady state.

But what is more disappointing is that this increased spending isn’t forecast to translate into stronger employment and wages growth.

The budget forecasts an unemployment rate of 4.5 per cent in 2023-24 and 2024-25. That’s better than pre-pandemic levels, but not all that close to the 4 per cent-or-lower number many economists (including RBA governor Philip Lowe) think might be required to get wages growing meaningfully for the first time since 2013.

Non-mining business investment is forecast to grow by 1.5 per cent in 2021-22 and then jump by a massive 12.5 per cent in 2022-23. That might reflect a post-COVID investment boom driven by a widely mRNA-vaccinated nation and a raft of government incentives. Or it might just be wishful thinking.

Whether immigration does actually pick up significantly in 2022-23 depends crucially on our vaccination rollout.

If we can reverse the bungled execution to date, overcome vaccine hesitancy, and secure enough Pfizer and Moderna doses (including for boosters) immigration might grow strongly again.

But there are a number of things that have to go right for that to happen. And the government has a poor track record to date on those things.

And then there’s one notable assumption that makes news in every budget: the iron-ore price. The budget papers themselves highlight the importance of it, noting:

The budget assumes the iron-ore price will decline from its current level of over US$200 a tonne, to US$55 a tonne by March 2022. This incredibly pessimistic assumption basically gives the government a buffer on the headline deficit figure. If the forecast of a $99.3 billion deficit in 2022-23 is beaten significantly, it will likely be due to iron ore prices staying high.

The biggest assumption of all

The core economic assumptions discussed above underpin the budget bottom line – a number that used to receive considerably more attention when there was a question of “when” the budget might be back in surplus.

Those days are gone.

Frydenberg has engineered a remarkable shift in Liberal party economic philosophy. While maintaining their brand as “the party of lower taxes, not higher taxes”, they have jettisoned budget-balance fetishism.

Read more: Cuts, spending, debt: what you need to know about the budget at a glance

But the biggest assumption of all in the out years of the budget is that the government – should it be reelected – sticks to this new strategy. If they do it holds the promise of being transformative.