Exhibition brings gold miners’ rights out of the dark

Emotive photos of disadvantaged mine workers show the human cost of industrial practices challenged by a record class action. 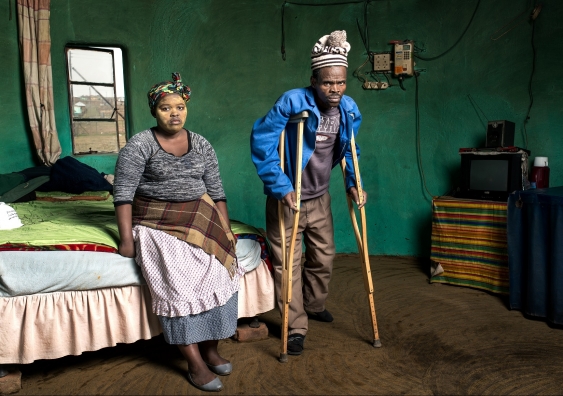 A photographic exhibition uncovering the health impacts of gold mining on South African mine workers and their families has opened in Sydney, on the same day the men became part of a historic class action settlement.

The Price of Gold, by British photographic artist Thom Pierce, is in Sydney as part of the Head On Photo Festival, open to the public from 5 May at Paddington’s Reservoir Gardens.

In a special preview event on Thursday, hosted by the Australian Human Rights Institute at UNSW Sydney and supported by The George Institute for Global Health and Maurice Blackburn Lawyers, Pierce joined Associate Professor Beth Goldblatt and Professor Andrea Durbach for a discussion called Capturing Community: A photographic exploration of the human impact of mining.

The 16 men pictured in the Sydney exhibition have silicosis, a preventable but incurable lung disease contracted from inadequate protection from silica dust, which makes them prone to infection and tuberculosis.

The men are parties in the largest class action ever brought in South Africa, which reached a $US400 million settlement overnight on Thursday.

Associate Professor at the University of Technology Sydney and Visiting Fellow at UNSW Law, Beth Goldblatt, said the case has received wide coverage in South Africa, and Pierce’s photo series, which was published widely, has deepened support for the miners and their families.

“The case will certainly impact on the mining industry and worker’s rights and has already added to the pressure for change in this sector,” Associate Professor Goldblatt said.

The Head On Photo Festival

The Head On Photo Festival is one of the world’s most prestigious photo festivals. Since its beginning in 2010 the festival has evolved to include a wide range of exhibitions from world-renowned photographers, innovative workshops run by international professionals and critically acclaimed mentors, and community events aimed at everyone from enthusiasts and devout collectors. This year's festival is from Saturday 5 May to Sunday 20 May. https://www.headon.com.au/

“The government is currently working on a mining charter. At the same time many of the problems facing workers and their families are still very evident.”

Pierce worked with civil society groups to photograph all 56 miners and widows in their homes before the court case in 2016, driving more than 7000 kilometres over 20 days to reach them all.

Photographing the carers, who are usually women, was a vital part of the story, he said.

“The fact that a miner is sent home without compensation and without the skills or health to work impacts heavily on the people who have to care for them,” Pierce said.

“Very often it becomes the woman who has to support the family financially, as well as raising the children and caring for her sick husband or father.”

In each home Pierce has photographed, there are details that we recognise - a bed, a stove, a photograph on the wall. Each detail provides a chance to connect in some way.

Professor Durbach of UNSW Law said: “The impact of Thom’s photographs also has application to Australia where workplace silicosis remains a respiratory hazard. In addition, it points to the role of Australian mining companies that operate abroad, as in South Africa, in contributing to the ill-health of local workers, seemingly without any accountability.”