Opinion How much power is too much when dealing with asylum seekers?

The Australian government's attempt to give unprecedented powers to the private operators of Australia's immigration detention centres looks unlikely to pass the Senate without significant change, write Gabrielle Appleby and Claire Higgins. 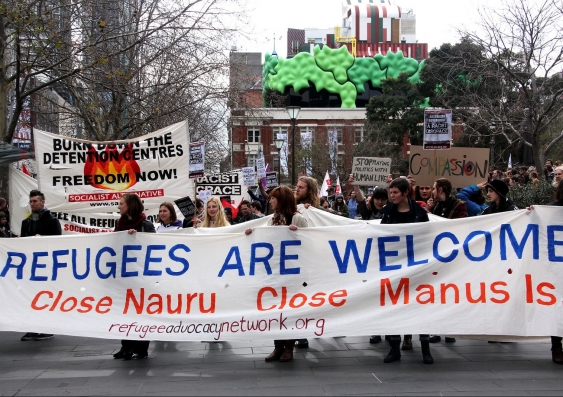 OPINION: The Australian government's attempt to give unprecedented powers to the private operators of Australia's immigration detention centres looks unlikely to pass the Senate without significant change.

But what has been overlooked is that similar powers exist over the 1577 asylum seekers detained on Manus Island and Nauru.

Last night, the government sought to head off a High Court challenge to Australia's funding of offshore detention centres by introducing "emergency" legislation.

Australia has a practical and moral responsibility for the asylum seekers in these detention centres and, under international law, Australia is obliged to protect their human rights.

But there has been a lack of information, let alone scrutiny, about scope of the powers that detention centre guards are authorised to exercise against asylum seekers in offshore facilities.

The proposed Good Order Bill gives broad discretionary powers to private contractors working in Australian immigration detention centres for the use of force against detainees to protect the life, health or safety of others, or to "maintain the good order, peace or security" of a facility.

"Good order" is not defined, and the powers appear to extend to the suppression of legitimate and non-violent protests within these facilities.The legislation provides extensive legal immunity to the officers and the government, provided these powers are exercised "in good faith" which may undermine accountability for the exercise of the powers.

These powers and the immunity have come under heavy criticism.

The Parliament's own Joint Committee on Human Rights raised concerns that the broad reach of the powers may increase the risk that the use of force could constitute degrading treatment under international human rights law. It noted that asylum seekers in immigration detention may be "particularly vulnerable". The legislation is before the Senate, with Labor and the Greens both introducing amendments aimed at narrowing its scope.

The government has not explained why these extreme powers are required. In 2011, Serco, which runs Australia's detention centres, requested "clarity" around its powers and supported strict limits on the powers it may exercise in relation to detainees.

Rather than authorising the use of force objectively assessed as reasonable in the circumstances, the proposed powers are authorised simply when the individual officer believes the force is reasonably necessary.

The legislation contains no clear set of criteria to be met before force is authorised with no reporting requirements or additional independent accountability mechanisms to oversee the use of the powers.

In fact, the recently passed Border Force Act has increased the degree of secrecy within the department, making it an offence not only for Immigration Department employees to disclose information obtained in the course of their work,  those contracted to the department are also covered by the same provision.

Last week, peak medical bodies formally protested the new law and the restrictions it places on their capacity to speak out on behalf of their patients about conditions in detention centres.

The Papua New Guinean parliament has introduced powers similar to the Good Order Bill. Tacked on to the end of a larger set of amendments to PNG's Migration Act, a provision was passed last month which authorised PNG officers and others to use "reasonable force" to temporarily restrain persons in immigration detention.

It appears it is intended that these powers will extend to the private contractors operating the Manus Island detention centre. As in the Australian legislation, the powers apply not only where there is a risk to a person's safety, but also where the individual believes the "good order" of the immigration detention centre is at risk.

Similar to the Australian legislation, legal immunity would be given for any injury or damage where the function has been "reasonably performed".

On Nauru, legislation passed in 2012 to pave the way for the detention of asylum seekers also authorised officers to use force against asylum seekers. They only authorise use of force "to the extent reasonably necessary" to prevent injury to the individual, other persons, or damage to property. But officers are granted immunity where the powers are exercised "in good faith on reasonable grounds". These powers are more constrained than those now in place in PNG and proposed for Australia.

However, the Senate inquiry into conditions on Nauru has unearthed allegations about the inappropriate use of force in the detention centre. Unlike the Australian legislation, Nauru's contains mandatory reporting requirements. However, the Senate inquiry has received concerning allegations about the destruction of evidence by private contractors relating to incidents involving the use of force.

The Australian legislation may not pass into law without significant amendment, which should be welcomed by anyone who values the protection of human rights.

But as long as the Australian government transfers asylum seekers arriving on our shores to detention centres in PNG and Nauru, we have an obligation to ensure that the powers authorised in those countries are also meeting international human rights standards.