Opinion If we're opening borders, why are thousands of refugees still awaiting entry?

Why hasn’t Australia done more to ramp up its resettlement program, like Canada and the US? 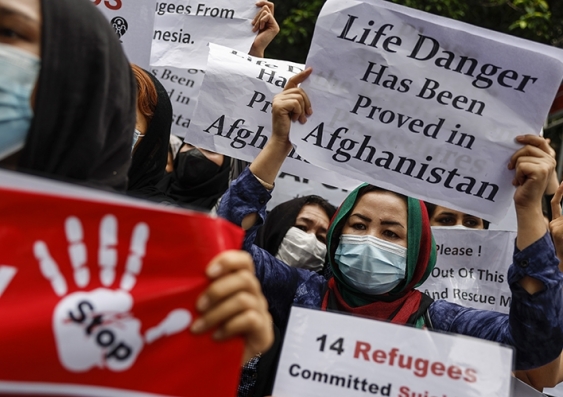 More than 150,000 Afghans have submitted applications for refugee and humanitarian visas to Australia since Kabul fell. Photo: MAST IRHAM/EPA

More than five months after Taliban forces overran Kabul, Immigration Minister Alex Hawke made a long-awaited announcement in January to resettle Afghan refugees. Over the next four years, Australia will offer 10,000 places to Afghans in humanitarian need and another 5,000 visas to Afghans reuniting with family in Australia.

The news came as a Senate committee released a “damning consensus report” that called Australia’s approach to the evacuation of Afghans last year “short-sighted”, “confused” and “dishonourable”.

The Senate committee urged the Australian government to “play a global leadership role” in resettling those displaced from Afghanistan. But just 15,000 visas fall far short of this task, particularly as these places will come out of Australia’s existing refugee and migration quotas, reducing space for others in need.

The Refugee Council of Australia called the announcement “hopelessly inadequate”. It pointed out that a large proportion of the pledged 10,000 humanitarian places could be taken up by Afghans who were evacuated to Australia last year, leaving just 4,500 spots for those overseas.

Meanwhile, 150,000 Afghans have submitted applications for refugee and humanitarian visas to Australia since Kabul fell.

Members of the Afghan community met with Hawke this week to urge him to recognise Australia’s “moral obligation” to the people of Afghanistan, calling for at least 20,000 more humanitarian resettlement places.

With borders closed, thousands are stuck in limbo

This is a tiny proportion of the more than 1.4 million displaced people identified by the UN refugee agency as being in need of resettlement each year.

Crucially, Australia’s program was suspended in March 2020 due to the pandemic. This left around 9,500 refugees waiting in limbo for borders to re-open almost two years later. There were only extremely limited exceptions for refugees to be resettled in the interim.

In contrast, after a short suspension early in the pandemic, the United States, Canada and some European countries resumed their resettlement programs in 2020, welcoming more than 30,000 refugees. These countries then welcomed the bulk of the more than 39,000 refugees resettled in 2021.

In December 2021, Australia reopened its borders to vaccinated skilled migrants and international students and began to welcome refugees who had been waiting for resettlement. Home Affairs did not respond to a request by The Conversation, however, for the numbers of refugees resettled since December 15, or when the program would ramp up.

Two months on, it is clear the government has been slow to develop COVID-safe processes that would allow for a larger-scale refugee intake.

Many refugees awaiting resettlement are stuck in countries that have low COVID vaccination rates. Some may also have received vaccines that have not been approved in Australia.

However, the government requires humanitarian entrants be fully vaccinated before arriving. The Refugee Council of Australia is calling for Canberra to create space in quarantine facilities to facilitate the entry of refugees who do not meet the vaccination requirements.

The US and Canada are doing better

Even though Australia has announced 15,000 visas for Afghan nationals over the next four years, its contribution is still well behind that of Canada and the US.

The Canadian government made a pledge of 40,000 places for Afghan refugees after the fall of Kabul. Delays in processing have meant only about 6,500 have been granted entry so far. But these places are in addition to Canada’s existing annual resettlement program (unlike Australia).

Since mid-2021, the Biden administration has admitted more than 74,000 Afghan nationals, many of whom now need to apply to stay in the United States permanently.

And for 2022, President Joe Biden has pledged to provide permanent resettlement to up to 125,000 refugees from around the world, although progress has been delayed somewhat as authorities work to speed up the entry of Afghan refugees.

With the Taliban once again allowing chartered evacuation flights to Qatar, the US plans to expedite its system of interviews, security and health checks, and visa processing for those fleeing Afghanistan.

No clear path for Afghans already here, either

Not only has the Australian government been slow to process Afghans fleeing their homeland, it has also not made it easier for those already in Australia to stay permanently.

This includes around 5000 Afghans living on temporary visas for the last decade. The visa conditions prevent individuals from bringing their family members to safety in Australia.

The Afghanistan-Australian Advocacy Network has also called for the government to review its eight-year ban on the resettlement of Afghan refugees from Indonesia. Several thousand people are stuck there without work, education or health care, waiting for a chance at resettlement elsewhere.

Meanwhile, around 25 Afghan refugees remain in limbo on Nauru or in Papua New Guinea, while others are detained in hotels in Australia.

The Senate committee’s call for Australia to be a global leader in refugee protection has been issued many times in recent years - by representatives of the US, the UN refugee agency and civil society groups.

Such leadership can have real impact. Ahmad Shuja Jamal, a special advisor at the Refugee Council of Australia, told the Senate committee Australia could use its influence to encourage neighbouring Pakistan to allow Afghan refugees to enter and wait for resettlement safely. This diplomacy can “literally save lives”, he said.

Instead, Australia’s response during the pandemic reveals a country quick to close its borders and drag its feet. This ignores the strong community support for the admission of Afghan refugees and Australia’s “international standing” as a country with a well-established resettlement program.

Should Australia wish to stake a credible claim to leadership in helping refugees, a much greater contribution to the protection of those fleeing Afghanistan is a crucial place to start.