A Smart Inclining Bed created by a leukaemia survivor is preventing falls and pressure sores in Australian nursing homes. 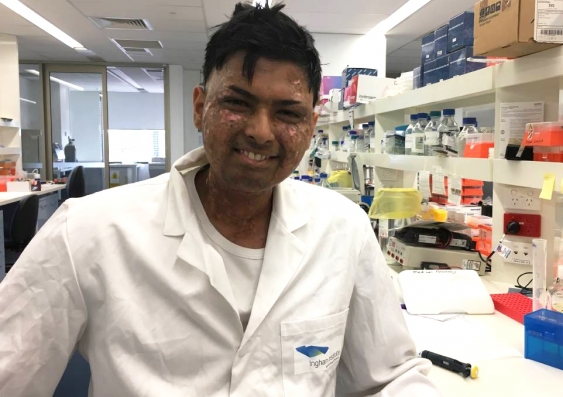 The side effects of bone marrow treatment are a small price to pay for being cured, says Nikhil Autar.

An entrepreneur and cancer survivor has created a simple, low-cost solution to tackle some of the silent killers in Australia’s hospitals and nursing homes.

At 17, Nikhil Autar was diagnosed with leukaemia and given a 10% chance of surviving. Life-saving bone marrow treatment cured him, but left lasting impacts on his immune system, lungs, liver and skin.

After his experiences moving through the medical system and losing friends to preventable illnesses, Mr Autar was inspired to pursue an idea to create affordable hospital beds. 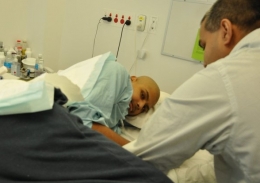 Nikhil Autar was treated for leukaemia at 17 years of age.

“I lost a couple of friends to preventable incidences that should never happen. One was 28 when she fell in the bathroom,” he said. “Being a medical researcher, I had the ability to look through papers and start reading into these preventable things – some of the biggest killers are things like falls and pressure sores.”

Preventable incidences aren’t common only in Australia. In the US more than half of nursing home residents fall every year.

Hospital beds reduce the rates of falls by 30% when compared with facilities equipped with generic beds, says Mr Autar.

“When I looked up the literature I saw that facilities with hospital beds had lower rates of falls because they help people sit up and get up – that’s how the Smart Inclining Beds came to be.”

The 25-year-old founded the startup, Get To Sleep Easy, with UNSW Business School student Sachin Kinger.

Created in 2017, the social enterprise is supported by UNSW Founders and won Australian Student Startup of the Year in 2018. Last year, the pair also pitched for the Peter Farrell Cup, a UNSW-run competition supporting startup founders across the University.

The Smart Inclining Bed is their pilot product, aiming to bridge the gap between home and healthcare.

“Hospital beds are too big, too clunky, too expensive, and mats that can detect pressure sores cost $6000 a pop,” Mr Autar said. “We invented the Smart Inclining Bed, a device that sits on top of your bed and doesn’t require a frame. It uses a combination of motors and air inflation to lift you up which reduces the price point to a tenth of a hospital bed.”

“The app can alert nurses, as well as loved ones, that someone is at risk of a pressure sore, if they’ve fallen or if they’ve stopped breathing,” the UNSW student said.

Pressure sores and pneumonia are some of the biggest killers in Australian hospitals and nursing homes.

“Pressure sores cost Australia $1.6 billion annually, they can take years to heal and I’ve had a few myself,” Mr Autar said.

'We want to make something that will actually help doctors so they can focus on those harder patients to treat and give them more time when they need to.'

“Pneumonia often can’t be prevented, but encouraging people to sit up reduces time spent in hospital by 35%.

“I knew from having pressure sores and pneumonia myself that this was such a big problem and that it took so much time, money and resources out of places.”

Get To Sleep Easy is currently partnered with Maroubra Shores Residential Care and Australian Unity – a high care residential facility.

“We want to make something that will actually help doctors so they can focus on those harder patients to treat and give them more time when they need to,” Mr Autar said.

“We’re working with world leading researchers and doctors in the Clinical Excellence Commission of Australia, Liverpool Hospital and some researchers overseas as well at the University of Pennsylvania.”

Mr Autar plans to expand Get To Sleep Easy to take on the future aging population in the developing world.

“The big long term goal is bridging the gap between home and health care that currently exists because the aging population is set to double by 2030.

“In the developing world there are higher life expectancies, so there will be another boom in aging populations that comes in.”