The unprecedented conflict between George Brandis and Commonwealth Solicitor-General Justin Gleeson has potentially serious repercussions for government under the rule of law, writes Gabrielle Appleby. 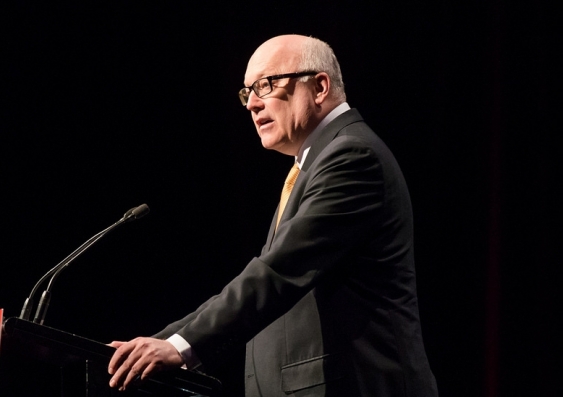 OPINION: On Wednesday, a Senate committee took evidence in an inquiry investigating the issue of a direction from Attorney-General George Brandis to the Solicitor-General, Justin Gleeson.

By the end of the day, the shadow attorney-general, Mark Dreyfus, was calling on Brandis to resign for misleading parliament and lying to the Australian people, or for the prime minister to sack him.

So what has Brandis done – or is alleged to have done – that has led to these calls?

In Australia, the attorney-general and the solicitor-general are the first and second law officers of the crown.

The attorney-general holds a largely political office, sitting in cabinet and often holding other portfolios. To fulfil their responsibilities for providing legal services to the government, the attorney-general is assisted by the solicitor-general.

The solicitor-general sits at the top of the vast numbers of lawyers who advise and act for government agencies, departments and officeholders. Their advice is respected as final and authoritative within government, subject to being overruled by the courts or, in very rare circumstances, by the attorney-general.

It is also imperative that those across government – including the prime minister – have ready and unhindered access to the solicitor-general.

How this inherent tension is negotiated rests on the integrity of the individuals who hold the two offices, and the mutual respect and trust between them.

The submissions and evidence before the Senate committee’s inquiry revealed this relationship has fallen to unprecedented lows.

The solicitor-general raises his concerns

Attached to Gleeson’s submission to the committee was a letter to Brandis dated November 12, 2015, in which he sought a meeting to discuss several concerns he had regarding his advisory function.

These included a statement by Brandis to Dreyfus on the government’s proposal to suspend or revoke a person’s citizenship that Gleeson considered possibly inaccurate. The statement was much quoted in the media, and was to the effect that Gleeson had advised:

… there is a good prospect that a majority of the High Court would reject a constitutional challenge to the core aspects of the bill.

Similar statements were reported from the prime minister.

Gleeson had explained in his letter that, in the full context of the extent to which he had and hadn’t provided advice on the bill and amendments to it, the statements:

… are capable of being understood as statements about the solicitor-general having advised on the current bill, and about the content of that advice. If so understood, they are inaccurate.

Gleeson’s concerns included that he had not at that stage been requested to advise the government on proposed amendments to achieve marriage equality, and a failure by Brandis and Prime Minister Malcolm Turnbull to seek his previous advice in relation to the release of correspondence between Sir John Kerr and the Queen in 1975.

Gleeson’s concerns over inaccurate representation of the solicitor-general’s advice are not new. The status and reputation of the office and the officeholders is such that governments are keen to rely upon them – before parliament and the public – when the legality of their actions is uncertain or called into question.

However, parliament has its own constitutional responsibilities to assess the legality of its actions. It may be failing in these where it relies only upon assurances by the government about the nature and strength of the solicitor-general’s advice.

MPs ought to insist on seeing the solicitor-general’s advice referred to so they can assess these things for themselves. Gleeson’s concerns about the possibly inaccurate representation of his legal advice to parliament (and the public) on the citizenship-stripping legislation demonstrate the importance of the full release of advice in such circumstances.

The recent report by the UK’s Chilcot inquiry into the legality of the Iraq War also highlights the dangers of parliament relying upon a summary form of the law officers’ opinion. There, a summary of the attorney-general’s advice was provided to parliament. The caveats and preconditions provided in the full advice on the war’s legality were removed.

This summary provided insufficient information for the parliament to take a vote on whether to authorise Britain’s entry into that conflict.

Brandis made the direction at the centre of the current storm on May 4, 2016 – almost six months after Gleeson first raised his concerns.

There is some disagreement among experts as to whether the direction is legally valid. While an important legal question, it may prove ultimately to be unnecessary to resolve.

It appears likely the direction will be disallowed in the Senate next week. This would also resolve the concerns about the effect of the direction: that it may deter or prevent Commonwealth entities from seeking legal advice from the solicitor-general.

Brandis has not directly explained why, given the nature of previous arrangements the solicitor-general had put in place, the direction was required at all.

Prior to the direction, the practice of the solicitor-general was governed by a less-formal protocol that was captured in a guidance note. Whenever a request for advice came to the solicitor-general, he wrote to the attorney-general to inform him of the request and allow him to confirm it. A copy of the advice was, in most instances, also provided to the attorney-general.

When Brandis made the direction, he issued an explanatory statement to the effect that he had fulfilled his statutory duty to consult with those affected by it. More specifically, it said:

The attorney-general has consulted the solicitor-general.

The two in conflict

In his submission, Gleeson denies that consultation occurred.

Documents released by Gleeson indicate a number of weeks of discussions and consultation took place between his office, the Attorney-General’s Department and the Australian Government Solicitor about a possible change to the guidance note. But there is no indication in these documents that a direction was proposed.

Further, Gleeson has denied there was any discussion about a requirement to seek the formal approval of the attorney-general before seeking his advice. In contrast to the direction, the guidance note was not a legal instrument; it was not enforceable in any way.

While Brandis’ submission to the committee has not yet been publicly released, it appears he disputes this version of events. He claims that on November 30, 2015, when he met Gleeson, Gleeson was consulted on the possible direction, and not just an amendment to the guidance note.

Gleeson and Brandis appear to be at a stalemate over the nature and scope of the consultations that took place. Regardless of where the truth lies, we now have an extraordinary position where the two law officers are in conflict. It demonstrates an unprecedented, very public breakdown in the relationship between the two officeholders.

To fulfil its potential for fostering the rule of law in government, the solicitor-general relies on others respecting and understanding their office. This respect and understanding ought to be exemplified and encouraged by the first law officer, the attorney-general.

It is a situation with potentially serious repercussions for government under the rule of law.