An Australian recession is likely to be part of a global slump, with some workers especially vulnerable, says a UNSW Economics expert. 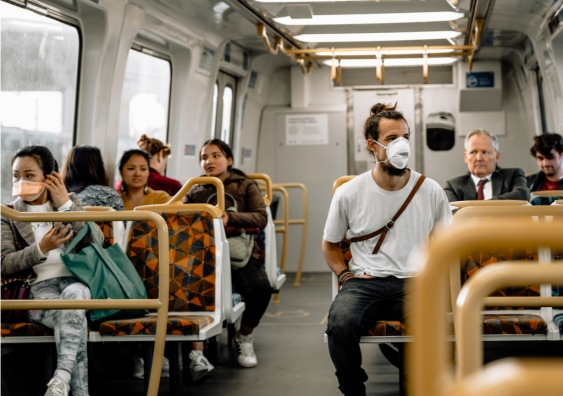 Commuters on a train in Melbourne wear a mask to protect themselves against COVID-19.

Australia should prepare for a recession that will particularly affect younger workers and women, said Raja Junankar, Professor of Economics at UNSW Business School.

The COVID-19 virus, declared a pandemic last week by the World Health Organisation, was accelerating its effect on economies globally, he said.

“Workers in part-time and casual positions – especially those whose income is heavily dependent on the gig economy – run a higher risk of losing their jobs. Casual workers will also have to carry the financial burden of going without pay for two weeks if they need to go in self-isolation.”

Women, who tend to work more often in cash-in-hand, casual or part-time work, were also exposed.

“Whilst it is a choice for many women to take up part-time work to spend more time with family, we note that the under-utilisation rate in Australia has gone up by 14 per cent even if unemployment has been hovering around 5 per cent. This increase in the under-utilisation rate means that there are more unemployed people who are actively seeking employment,” Professor Junankar said.

It was unclear whether the federal government’s $17.6 billion economic stimulus package announced last Thursday would be enough of a boost for consumer confidence, he said.

This was the case even after the Reserve Bank of Australia (RBA)’s move to stimulate consumer spending by lowering official cash interest rates by 0.25 percentage points last week.

“The RBA has been consistently lowering interest rates for the past 12 months, yet this has barely increased spending in industries such as housing construction. People have also become more risk averse and less inclined to take loans to spend on capital goods,” Professor Junankar said.

How has China affected the Australian economy?

As China has constrained the spread of the virus by locking down transport, industry and other parts of society, the effects have rippled through the rest of the world.

“Australia has taken preventative measures and has a stronger economy due to its mineral and agricultural sectors. However, due to our trade ties with China, we are more susceptible to the Chinese economy slowing down,” Professor Junankar said.

Who in the workforce is more at risk?

Both the unemployment and the under-utilisation rate in Australia will worsen over the next six months as COVID-19 more deeply affects economic activity.

“To alleviate the financial pressure involved, many businesses will choose to reduce their number of casual and part-time workers. This will largely affect household incomes and mortgage repayments.”

Will the stimulus package be enough to help the economy bounce back?

Professor Junankar said the government’s stimulus package was not big enough to stimulate the Australian economy.

“Firms are not likely to increase their investment in capital goods as there is a lot of uncertainty due to the spread of COVID-19,” he said. “It is therefore unlikely that the support to businesses in the Coalition stimulus package will bring the economy back to avoid a recession.”

It is expected that the budget deficit will carry on to 2021 to give the government time to recover from the $17 billion economic stimulus package.

Professor Junankar compared Prime Minister Scott Morrison’s stimulus package and the package implemented by former Prime Minister Kevin Rudd to buffer against the effects of the global financial crisis in 2008.

“The package is also not well-targeted. Rather than targeting workers, it has been designed to help employers. There are elements of tax relief for small businesses and $1.3 billion to support payments to apprentices – however, such policies are not directly assisting workers and are based on the assumption that all employers are good and fair.”

Professor Junankar said recent revelations about Australian employers underpaying their staff underlined concerns that the benefits of the stimulus package would not necessarily be handed on to workers.

“Many employees are not being paid the right amount and are victims of wage theft. Can we therefore fully trust that employers will do the right thing and use the incentives offered under the stimulus package to keep their workers employed?” Professor Junankar said.

What more can be done to safeguard the economy?

Professor Junankar suggested the following 10-point plan to prevent another recession from occurring: