Strata title is the fastest growing property title in Australia today, which means more and more of us have questions to ask. UNSW Law Associate Professor Cathy Sherry has the answers. 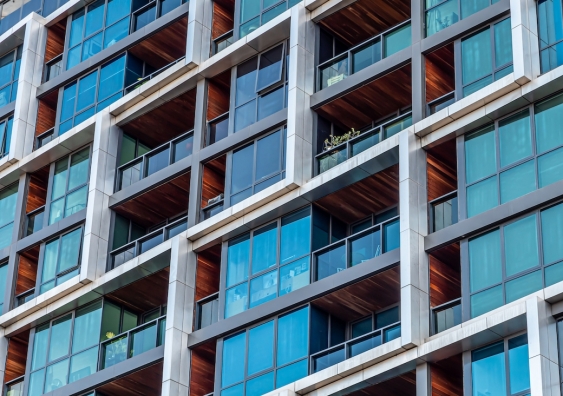 State urban consolidation policies have for decades aimed to fit the majority of new development within the existing footprint of cities like Sydney. The only way to achieve this is by building up, not out – and building up results in strata title.

What is strata title?

Strata title is the subdivision of land and air into individually owned ‘lots’ and collectively owned ‘common property’. When a new apartment block is almost complete, a surveyor will draw up a strata plan marking out the boundaries of lots and common property by referring to the building’s walls, floors and ceilings. This plan is then registered on the Torrens land register, and the legal title to the individual apartments is born.

If any questions arise in future about whether an area, such as a balcony or courtyard, is common property or lot property, the strata plan will provide the answer. Accurate identification of lot and common property is essential because individual owners are required pay for the upkeep and repair of their own property, while all owners collectively pay for common property.

What is a body corporate?

On the registration of a strata plan, an owners corporation or body corporate is automatically created. This is a separate legal entity made up of all owners, but not tenants. The owners corporation has obligations (imposed on it by law) to maintain the common property, collect levies each year and to generally run the scheme.

Owners corporations are often assisted by a smaller group of owners who are on the ‘strata committee’, and/or by a strata or building manager. However, the ultimate authority in all schemes is the owners corporation — that is, all owners making decisions collectively. For example, only the owners corporation, not the strata manager, can decide how much money needs to be raised in levies each year.

Who sets the rules?

The owners corporation also has the power to create and change by-laws or rules that apply to the strata scheme and all its residents. While there are model by-laws in the legislation, there is no obligation to use them, and developers often write bespoke by-laws for developments. All by-laws can be subsequently changed by the owners corporation by a special majority vote.

There is little limit on the content of by-laws and they can be quite intrusive. For example, it’s possible for strata schemes to mandate white-only window coverings, specific plants in people’s courtyard gardens and particular floor coverings. Many by-laws are justifiable because they promote harmonious living. For example, wooden floors with insufficient acoustic underlay can create unbearable levels of noise for apartments below. However, some by-laws are less justifiable. For example, many schemes ban pets over a particular weight or even outright.

What about pets and strata?

These by-laws are often irrational as the only justification for regulating a pet in a strata scheme is to prevent it disturbing other residents. A cat who never leaves an apartment, or a Labrador who snoozes on the sofa all day, won’t disturb people and shouldn’t be the subject of regulation. Changes to strata legislation in 2015 introduced a new provision prohibiting by-laws that are ‘harsh, unconscionable or oppressive’, and a number of blanket pet bans have since been struck down by tribunal members under this provision.

Who is responsible for maintenance?

Strata title is a complex form of property ownership, particular in large-scale developments which can contain multiple strata schemes and extensive common property. This might include private roads, pools, gyms, tennis courts, parks, and black and grey water treatment plants, all of which the owners have to manage and pay to maintain. People buying into strata schemes are often attracted to the idea that they will be able to avoid the maintenance responsibilities of owning a non-strata title property. In reality, what needs to be maintained can be infinitely more complex and must be negotiated with a large number of co-owners.

Some strata questions are still unanswered

While governments have been actively involved in the creation and amendment of strata title legislation, it’s arguable they have never fully appreciated the consequences of creating large-scale private housing. Effectively, private citizens operating through an owners corporation have power over their neighbours’ homes and lives.

In decades to come, as millions of Australians choose or are compelled to make strata schemes their homes, these questions will need to be answered.