Opinion Turnbull PM: Where to now for marriage equality?

Malcolm Turnbull must hope the Senate blocks moves to hold a plebiscite, saving him from having to follow through on a policy that he knows is a step in the wrong direction, writes George Williams. 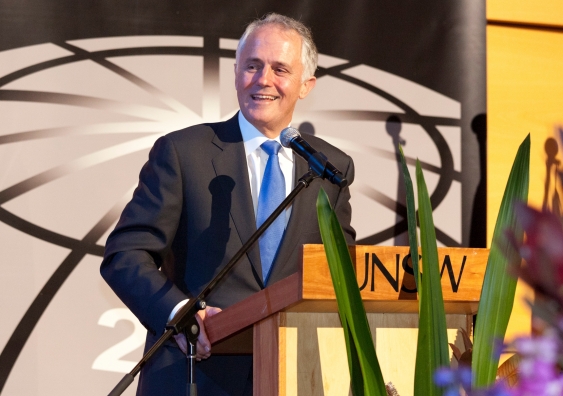 OPINION: Malcolm Turnbull made it clear last week that he will keep to the coalition's position on same-sex marriage. He will not allow party members a conscience vote. Instead, his government is determined to put the issue to the people. Although he had argued against this approach, Turnbull now finds himself having to implement it, saying that Australians will vote in a plebiscite after the next election.

Turnbull can only hope that other events intervene. Indeed, he may be saved by the fact that Senate support is required to allow the vote. No legislation has yet been passed permitting a plebiscite. For this to occur, the Senate will need to be onside.

Coalition members had every right to be confident that Senate support would be forthcoming. After all, Senate crossbenchers have spoken in favour of a plebiscite, and have even introduced their own law to bring this about.

This changed last Wednesday, after Turnbull had made his position known. Overshadowed by the change of leadership, the Senate released a report on the crossbenchers' bill for a plebiscite. The report was authored by the Senate legal and constitutional affairs committee chaired by crossbencher Senator Glenn Lazarus, a sponsor of the plebiscite bill.

Lazarus had expected the inquiry to endorse his bill and to conclude that a national vote was a good idea. To his surprise, the submissions demonstrated the opposite. As he said: "Quite clearly people that are for and against marriage equality would rather have the parliament decide the outcome rather than going to a plebiscite."

Faced with this, Lazarus changed his position. To his credit, the committee did not recommend passing his bill. More broadly, it rejected the idea of holding a referendum or a plebiscite.

Some people have suggested that Australians should vote on same-sex marriage by way of a referendum to alter the Constitution. There was never much sense to this idea. The High Court examined the federal "marriage" power in 2013, and unanimously held that it can be used to make laws for same-sex marriage. This means that the Constitution already permits parliament to maintain the status quo, or to allow reform. Holding a referendum would only confuse the issue.

Lazarus' committee found that a plebiscite is unnecessary, a waste of taxpayers' money and could be harmful. It is not needed because a vote of the people is not required for parliament to legislate on same-sex marriage. Indeed, parliament has made a number of contentious changes in this area in the past.

The Menzies government succeeded in having parliament legislate for a nationwide divorce law in 1959, while the Whitlam government brought about no-fault divorce in 1975. Both faced strong opposition from religious and other groups, yet neither government suggested that a national vote was required. To do so now would not only be unnecessary, but unwise. It could establish a political precedent that might mean a national vote is required for other contentious social reforms.

A plebiscite could also be hideously expensive. The Australian Electoral Commission estimated that the cost of holding a plebiscite between elections could run to $158 million. This would be the price of holding a non-binding vote in an area in which numerous opinion polls have already shown clear majority support in favour of change. There must be better things on which to spend taxpayers' money.

Finally, gay and lesbian people and health professionals have warned against holding a plebiscite because it could harm vulnerable members of the community. A national vote on same-sex marriage would not only provide a platform for those in favour of change, it would also amplify prejudices and homophobic views. As Lazarus has said, the campaign would allow the gay and lesbian people to be "attacked through very nasty and very aggressive advertising campaigns". This is the last thing they and their children need.

Arguments such as these led Lazarus to reject his own proposal for a plebiscite. Convinced by the evidence, his committee instead recommended that a bill be introduced into parliament for same-sex marriage "as a matter of urgency, with all parliamentarians being allowed a conscience vote". It can only be hoped that Lazarus and the other crossbenchers maintain this position, and allow common sense to prevail. In doing so, they will save Turnbull from following through on a policy that he knows is a step in the wrong direction.

George Williams is the Anthony Mason Professor of Law at the UNSW.

The plebiscite has damaged the chances of the Indigenous recognition referendum