CEPAR researchers are working with the World Bank and the Indonesian Ministry of National Development Planning to create a powerful social policy tool to improve the economic welfare of millions of people. 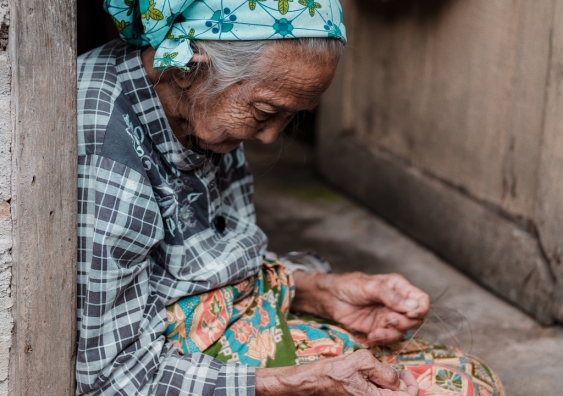 The elderly in Southeast Asia are at greater risk of poverty amidst major shifts in labour markets, technology and deficient social protection policies. Photo: Shutterstock

Unprecedented growth of the ageing population in Southeast Asia has called for intervention – specifically the need for change in social policy development to protect those in the unmonitored informal sector against poverty.

This is in line with the United Nations’ projection that Indonesia’s population (aged 65 and over) will increase to about 44 million in 2050 and over 71 million in 2100. A similar trend exists for other densely populated countries in Southeast Asia, namely Thailand and Vietnam.

To help Indonesia safeguard the economic welfare of its ageing population, Dr George Kudrna and Scientia Professor John Piggott from the Centre of Excellence in Population Ageing Research (CEPAR) were awarded $260,000 funding under the most recent Australian Research Council (ARC) Linkage Projects Scheme, along with $150,000 in partner funding to develop a major social policy model.

A sense of urgency for those in the informal sector

The rapidly ageing population in Southeast Asia is occurring amidst major shifts in labour markets, technology, formalisation and deficient social protection policies – placing the elderly at a higher risk of poverty.

Social protection policy in many of these jurisdictions is lacking, often with no reach into the informal sector, which can account for as much as 72.5% of the Indonesian labour force.

The ageing population in Indonesia – like in many other countries across Southeast Asia – also depends heavily on private transfers from adult children to their parents. But with regional migration to major urban centres underway, many older people are left destitute in rural areas without family support and in the absence of well-constructed social policy programs.

“In Indonesia, the labour force participation rate among elderly populations operating in the informal sector is very high, over 60 percent. In comparison, the labour force participation rate for those aged 65 and over in Australia is below 20 percent. Due to poor social policy coverage in Indonesia, many people in the informal sector basically have to work until they die,” says Dr George Kudrna, one of the Chief Investigators on this project.

This is why policy reform is essential for a country with a rapidly ageing population and a large informal sector.

The impact of the model on inequality, poverty and economic growth

The development of economic modelling in Southeast Asia is long overdue. Existing models in developed countries have not been applicable to emerging economies due to major differences in economic structures. In most cases, interactions with the informal sector have been ignored.

In contrast, the model that Dr Kudrna’s team is working on will capture interactions between formal and informal sectors and will examine complex interactions between policy, ageing, education and formalisation – key factors for economic growth in emerging economies like Indonesia.

It will also take into account the impact of demographic dynamics and population ageing on households with fewer children and extended lifespans.

“It is necessary but challenging to incorporate the informal sector in an integrated way, because a major avenue for growth is formalisation,” Dr Kudrna says.

The informal-formal transition in our framework will be subject to labour market frictions and directly impacted by tax and transfer policy settings. An example is the consumption tax funding of minimum pension payments extended to those in the informal sector.

“We will develop an overlapping-generations (OLG) model accounting for the economic imperatives operating in emerging economies. The model will be calibrated to Indonesian macroeconomic as well as household survey data, capturing the behaviour of Indonesian households – their labour supply and saving decisions – over the life cycle in both formal and informal sectors. It will also incorporate private transfers,” Dr Kudrna says.

“The ultimate goal of this project is to extend retirement income as a form of formal social security to informal workers in a sustainable way. Many developed countries provide pay-as-you-go social security as employees or employers or both pay payroll taxes in exchange for rights of employees to access public pensions in older age.

“But this is quite difficult to do in developing countries as even if people have the opportunity to join the formal sector, they will prefer to stay in the informal sector, so they don’t have to pay tax.”

What will the model achieve?

Once developed, the model has enormous potential as a planning tool across the Southeast Asian region. Research findings will also help establish an extensive outreach program to facilitate knowledge transfer to other countries in the region.

The model will also be applicable to all emerging economies with large informal employment and private transfers – countries representing over half of the world’s population.

It will provide emerging economies in Southeast Asia with new tools and insights to inform the design of retirement and other social policies.

“This will be made possible as our model will take into account interactions between population dynamics, human capital accumulation, informality, inequality, and economic growth – which are essential for policy analysis in these economies,” Dr Kudrna says.

Partners on this project

The project is a joint collaboration with the World Bank and the Indonesian Ministry of National Development Planning (Bappenas). Through this project, the World Bank is aiming to improve policy analysis in relation to population ageing and retirement policies. It will be an important component of its strategy to end extreme poverty and foster shared prosperity in emerging economies. The model will also be an invaluable asset for Bappenas’ upcoming pension policy review and reform over the next decade.

Dr George Kudrna will take primary responsibility for the development and programming of the model and lead the implementation and coordination of the project. Dr Kudrna has over ten years’ experience in building large-scale OLG models and is currently a principal consultant and technical advisor to the Australian Treasury on the development of their OLG model of the Australian economy.

Director of CEPAR and Scientia Professor John Piggott will work on the development of the model structure. He was one of the first economists to develop an applied general equilibrium model with an informal sector and will advise specifically on this aspect of the model development. He also brings expertise in public finance and retirement policy.