Opinion Video play: University turns the science of microeconomics into a great game

Economics students at UNSW get to master a video game as part of their degree program, writes Peter Wells. 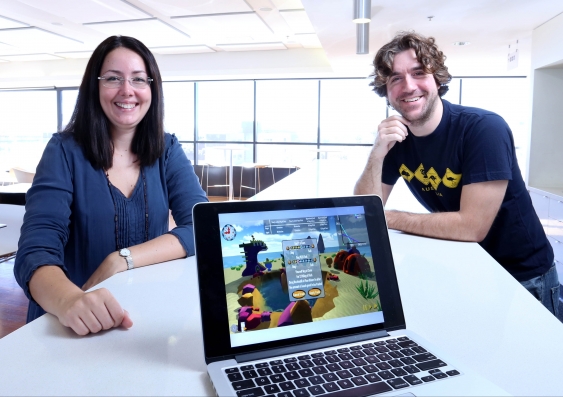 OPINION: When you think of an "educational video game", what comes to mind?

For me, it's chasing Carmen Sandiego​ across the globe. Thirty years later, my knowledge of the city of Port Moresby is derived from that game. Other games from my childhood stand out, but by high school they had become purely for fun, separate to education. So it was surprising to stumble across a game being developed for the tertiary education market, teaching microeconomics, no less, at my day job in UNSW Australia.

Alberto Motta​ and Isabella Dobrescu​ from the university's School of Business have spent the last seven years building and rebuilding the school's first-year microeconomics course as a game that is part SimCity, part Civilisation, but still an accredited subject towards an economics degree.

Students still attend lectures, but textbooks and course work have been replaced entirely by the game. Passing the course is a matter of successfully beating it, and students who finish with fewer failed attempts receive a higher mark. This is not some cheesy Second Life virtual teaching space, but real life classes augmented by technology.

Playconomics, the game in question, debuted July 2014 as a side project. In 2015 it was used to deliver an introductory microeconomics course in three universities  to more than 4000 students.

Playconomics was built on Unity, the game engine powering many popular indie titles from Angry Birds to The Room. Unity is not the most powerful engine on the market, but it enjoys multi-platform support, working on Mac, PC, iOS and Android.  The openness of the community means its popularity has skyrocketed in recent years. Unity CEO John Riccitiello​ once said that he hoped the engine would democratise game development, and if Motta's experience is anything to go by, it seems to be working.

Motta is passionate about the platform: "We love that game engine. It is easy to pick up and hard to master," he said.

After seven years mastering it to create Playconomics, Motta, Dobrescu and their team are now using it to create a platform for similar courses. The team made a sequel of sorts to Playconomics, focusing on macroeconomics. After that, they moved outside the field to help develop a game for medicine, Playmed, using the same principles. These follow-up titles took just a few months to do. .

"It started as a specific game for a specific course," Motta said. "In order to help other academics develop their own courses, it became clear that we needed to build out a platform around the course.

"You need a platform flexible enough, which is very complex to design and implement. Think of PowerPoint. You can use PowerPoint to make all sorts of great presentations because the software gives you that kind of freedom.

"We are doing something similar with Unity. We are building a platform other academics can use to create their own courses. In order to do that, you need great academics from different areas to work with. Luckily for us, we have no shortage of that!"

So, with the Playconomics platform morphing into Playmed and Playtax, does Motta see himself more as an academic or a game developer?

"We don't see it that way," he said. "We are academics. We are interested in the research aspect. This is just a platform that allows us to do research, from education economics to large outreach development programs. That's what excites us. It fits so well with our job as academics."

Peter Wells is a technology commentator who works in IT at UNSW.

Read more about Playconomics in the UNSW Magazine story 'Gamechangers'.