Brainard has been pushing the US Federal Reserve to consider exposure to climate change in its regulation and analysis of banks. That’s sparked fury from Republican senators – and even a Nobel Prize winner. 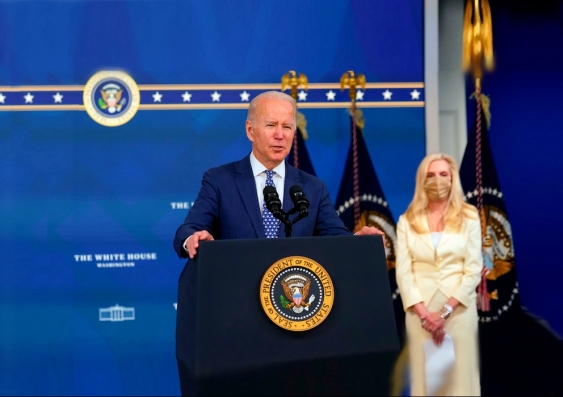 Joe Biden has faced the same conundrum as a parade of predecessors – whether to reappoint a chair initially appointed by the other side of politics.

This week his choice came down to reappointing Jerome Powell, appointed chair by Republican Donald Trump, and appointed to the Fed by Barack Obama, or giving the job to another Fed governor Lael Brainard, a former top official in the Clinton and Obama administrations.

The term of the Trump-appointed vice chair Richard Clarida was also set to expire, and he was caught up in an insider-trading scandal of sorts.

On Monday Biden decided to both reappoint Powell as chair, and make Brainard vice chair.

If confirmed by the Senate, Brainard would become the third woman to hold the post, after Alice Rivlin and Janet Yellen.

Brainard has impeccable credentials. She holds a PhD from the Harvard economics department and quit a very promising career in academia to serve both President Clinton and President Obama.

As vice chair, she will have significant influence. The chair of the Fed is more like the ringmaster than a chief executive, making his or her vice chair a key player.

So where does she stand on the big issues?

Dovish on rates, concerned about climate

On interest rates Brainard is pretty dovish, just like Powell. This is another way of saying she seems to be in the “this recent inflation is transitory” camp, and so is unlikely to want to risk raising interest rates early.

On banking regulation she is tougher than Powell. One of the key reasons President Trump appointed Powell to replace the Obama-appointed Janet Yellen was Powell’s more relaxed approach to regulating Wall Street.

Powell hasn’t been completely soft on regulation, but he has pushed things in that direction. Brainard has a tougher stance. In her seven years at the Fed, she has dissented on more than 20 board votes that relaxed Wall Street regulations.

But the big point of departure is climate change. Brainard is a leading advocate of the Fed taking a bigger role factoring in climate change into its thinking, along the lines of the Bank of England and, to a lesser extent, Australia’s Reserve Bank.

Her advocacy has sparked a furious response, with Republican senators telling Powell the Fed lacked authority to consider exposure to climate change in its regulation and analysis of banks.

No less a figure than Nobel Prize winner Jean Tirole backed them this month, saying central banks were ill-equipped to consider climate change.

Powell appears to be less keen on taking climate change into account, but if Brainard is confirmed by the Senate she will become a force to be reckoned with.

Rates up in NZ, not yet in Australia or the United States

Meanwhile, across the Tasman on Wednesday the Reserve Bank of New Zealand hiked interest rates for the second consecutive month, pushing its cash rate up to 0.75%, well above Australia’s 0.10% and the US Federal Fund’s rate of 0.25% amid concerns about rising inflation.

Brainard is likely to show more caution, siding with Nobel Prize winner Paul Krugman who said this week that if the Fed raised rates and pushed the US into a recession, it might be hard to cut rates enough to get it out again.

It’s something Australia’s governor Philip Lowe is likely to ponder after seeing Australia’s September quarter national accounts due out next Wednesday.

They will show how much the economy went backwards during the depths of the mid-year lockdowns, and provide clues as to the strength of the bounce-back likely now that Australia’s two biggest states are returning to work.