Opinion What's at stake in Trump's war on Huawei: control of the global computer-chip industry

US actions do more than just keep Huawei away from critical infrastructure. They choke off the supply of semiconductors to China. 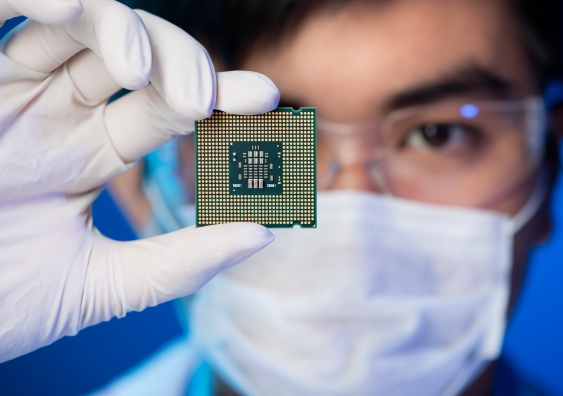 The semiconductor industry sits at the centre of the modern world. www.shutterstock.com

Silicon Valley may now be more popularly associated with software companies such as Google and Facebook but it takes its name from the material most used to make semiconductors.

Semiconductors – or computer chips – power everything from mobile phones to military systems. The semiconductor industry sits at the centre of the modern world.

This point is key to appreciating what’s going on in the US government’s battle with Chinese technology giant Huawei.

The US actions do more than just keep Chinese technology away from critical telecommunications infrastructure – something it has lobbied US allies to emulate.

They also choke off the global supply of semiconductors, and technology to make semiconductors, to Huawei, thereby limiting China’s rate of technological progress, economic development and ability to compete with the US.

In May US president Donald Trump signed an executive order blocking US technology companies dealing with Huawei. The order bans “any acquisition, importation, transfer, installation, dealing in, or use of any information and communications technology or service” without special approval.

Among the effects is that Google has stopped licensing its Android mobile operating system to Huawei, limiting the Chinese company’s ambitions in the global phone market.

But arguably the biggest consequence is blocking the sale of US semiconductors, and semiconductor-making equipment and services.

Huawei is not only the world’s third-largest buyer of semiconductors but, through its subsidiary HiSilicon, one of China’s biggest semiconductor makers. Being shut off from US suppliers impedes both the competitiveness of its products and the development of its own chip-making capacity.

The US Semiconductor Industry Association has urged the US government to approve exemptions because there are no “national security concerns” in selling semiconductors to Huawei for “non-sensitive” products such as phones. It argues the ban only benefits foreign rivals.

But my research, based on financial data from Bloomberg, points to a coherent strategy to preserve US dominance of the global semiconductor industry. 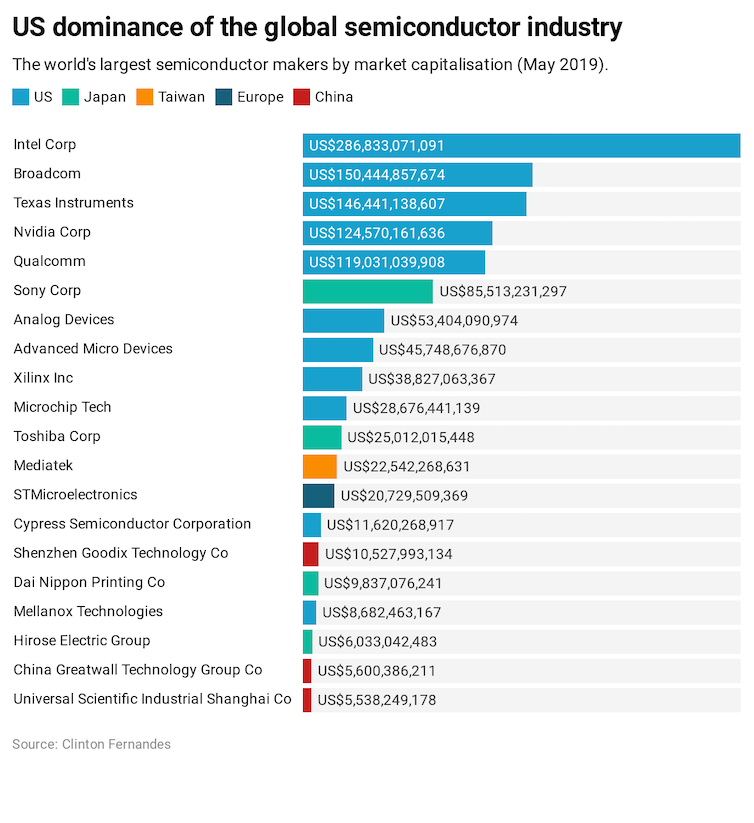 Despite all the hype about the rise of China, Chinese involvement in computer and electronics technologies is still typically restricted to lower-end activities such as making and assembling components. US companies take the lion’s share of profits through controlling the intellectual property in design, branding and marketing of electronic goods.

Apple Corporation, for example, subcontracts Taiwanese company Hon Hai Precision Industry to assemble its products. Hon Hai in turn employs up to a million Chinese workers through subsidiary Foxconn, which makes products for Apple along with other brands. In 2013 Hon Hai’s profit was US$2.6 billion. Apple made US$33 billion – almost 13 times more.

Based on everything Trump has said about China, this is the way he would like to keep things.

China wants to become a global semiconductor player but lags far behind US corporations in size and sophistication. It continues to rely heavily on semiconductor imports. It spends more on importing semiconductors than on oil.

HiSilicon, like other Chinese companies, lacks the manufacturing experience to produce advanced semiconductors at scale. For basic chip design it has relied on British semiconductor design company Arm (owned by Japan’s Softbank). Arm cut ties with Huawei in May to comply with US restrictions.

Finding a replacement for Arm won’t be easy. Most of the other big providers of equipment, software and services for designing and making semiconductors are American – such as Cadence Design Systems, Synopsys, Applied Materials and Lam Research.

Blacklisting Huawei on national security grounds can therefore be seen as a way to hinder China’s semiconductor industry. It help keeps China in a subordinate position as an assembly area for US corporations.

Trump’s Huawei strategy looks more coherent than many other parts of his international agenda. The ban may also be hurting US companies, but the longer-term prize is maintaining the hegemony of US companies in a vital industry and keeping the American state in front of its geopolitical rival.

It appears we may be at the start of a new cold war that will play out across technology industries – from the global semiconductor industry to 5G networks, exascale computing, artificial intelligence, autonomous vehicles, robotics and gene editing.

These are battlefields on which the Trump administration has already signalled it wants its allies to join it.

This potentially complicates the desire of a country like Australia, which wants good relationships with both the US and China, its most significant trading partner. Decisions such as blocking Huawei from tendering for contracts for Australia’s 5G network could well be seen as evidence we are far from neutral, instead being a deeply and willingly integrated part of the US empire.