A team of UNSW law studentshas taken on the world and emerged champions in a mooting competition in Scotland. 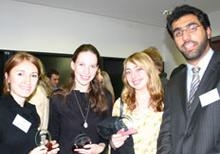 A team of UNSW law students has taken on the world and emerged champions in a mooting competition in Scotland.

It is the first time an Australian university has won the title.

Unique to the Lachs competition, the final was judged by sitting judges of the International Court of Justice - His Excellency Judge Abdul Koroma and His Excellency Judge Peter Tomka. The third judge was Professor Francis Lyall from the University of Aberdeen and Board Member of the European Centre for Space Law.

The win consolidates UNSW Law School's standing as an international leader in mooting. It follows success in the Jessup International Law Moot in Washington in April when the UNSW team outshone universities from across Australia and around the world to be runners up in the grand final.

UNSW has also fared well in national competition. A separate team recently won their way to the final of the 2008 Sir Harry Gibbs Constitutional Law Moot Competition in Melbourne.

Missing the boat on asylum

Human rights in a changing environment