Opinion Channelling Reagan smart, but the day of reckoning will come

Cutting taxes quietly for business and the wealthy and hoping for jobs and growth is good politics, but there will be a price paid for fiscal profligacy, writes Geoffrey Garrett. 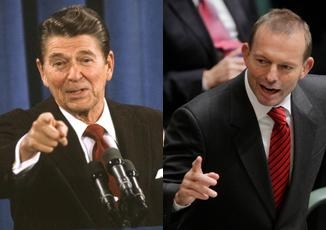 OPINION: The early days of Tony Abbott’s prime ministership are looking a lot like Ronald Reagan’s first year as US president in 1981. First cut taxes. Then hope this not only increases growth and creates jobs but also balances the budget.

Reagan called this supply-side economics, replete with Laffer curves on how cutting tax rates can increase tax revenues. Reagan’s critics labelled this voodoo economics that would only blow up the US budget.

Both sides were half right. The American economy climbed out of a very deep recession by the mid-1980s, and Reagan’s tax cuts – along with serious deregulation – can take some of the credit.

But public debt and budget deficits ballooned, partly because the projected Laffer windfall never materialised but more importantly because Reagan spent his way to winning the cold war through massive increases in military expenditures.

Australia’s economic and fiscal position today is much stronger than America’s was when Reagan came to power, and even if the Coalition increases defence spending, with US support if not insistence, the rise of China isn’t a second Cold War.

So Abbott is starting in a much stronger place than Reagan did. The Coalition campaigned on repealing the carbon and mining taxes and cutting company tax. Now Joe Hockey has announced the government will not implement higher taxes proposed by Labor on foreign income, depreciation, self-education expenses and big superannuation payouts.

The government can reasonably expect its tax cuts and more business-friendly approach overall to stimulate growth and jobs they way Reaganomics did.

But the Coalition no doubt fears that Australian public debt and budget deficits will also follow the dire Reagan path. The problem is that Australia doesn’t have the US’s privileged position in the global financial system that continues to shield it from the kind of pain the markets have inflicted on Europe in recent years. That is why the government, unlike Reagan, has no choice but to take on the political challenge of spending cuts, with Tony Shepherd’s audit and the likely upcoming mini-budget poised to set the stage.

There are three economic reasons why focusing on tax cuts first makes sense for the Abbott government.

First, as the investment phase of the mining boom winds down and global commodity prices soften, restoring business confidence to encourage investment is a must. There is no way to make business feel more confident than to cut their taxes.

Second, unlike 2009 when both China and the US went on massive government spending sprees and monetary loosening, the two biggest drivers of the world economy are now committed to turning off the stimulus boosters. If Australian growth and employment are to pick up, the recovery will have to be domestically led.

Third, with interest rates at all-time lows, there is little scope for the Reserve Bank to do more to rev up the Australian economy. Glenn Stevens worries about the high Australian dollar, but he knows cutting interest rates much more would unduly risk inflationary asset bubbles.

So business-tax-cut-led economic policy fits Australia’s current situation well. But whereas Reagan went out of his way to explain to the American people what he was doing and why, the Abbott government is not erecting billboards saying “We are cutting business taxation and here’s why”. Indeed, the Abbott government seems hell-bent on starving the 24-7 media cycle of oxygen.

The government’s silence on the tax cuts that are emerging as a major theme of its first term is understandable. Everyone remembers the public-debt scare­mongering the Coalition used so effectively in opposition to discredit Labor’s post-GFC stimulus-cum-profligacy. So convincing the electorate that adding to the deficit through tax cuts that privilege business and the wealthy is a good idea will be hard. All the more so because average Australians don’t feel like the country is facing an economic crisis, and both sides of politics have gone out of their way to reassure them. This is a world apart from early ’80s America with double-digit inflation, interest rates and unemployment.

Cutting taxes as quietly as possible and hoping this increases jobs and growth is therefore good politics. But unlike 1980s America, the Coalition’s day of reckoning when it comes to cutting spending must come, and quite soon.

Channelling Reagan is smart for Abbott. But he knows his government won’t be able to get away with the fiscal profligacy that tends to be overlooked in the history of the Reagan revolution.