Businesswoman and UNSW alumna, Lucy Turnbull, has been awarded an Honorary Doctorate of Business in recognition of her significant service to the community. 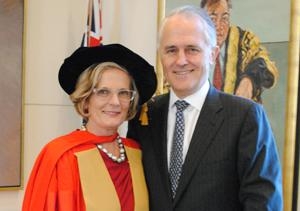 In an address to a graduating class of Australian Graduate School of Management students, Lucy Turnbull AO, spoke about the importance of family, philanthropy, and how studying at the AGSM empowered her to achieve success in the business world.

Turnbull was at the UNSW ceremony to receive an Honorary Doctorate of Business, in recognition of her considerable achievements and service to the community.

“I think that studying for my MBA gave me the confidence to think I could tackle many things in the wider world than I would have had if I had not gone beyond my law degree, or legal practice. For me, studying an MBA was really empowering,” said Turnbull, a strong supporter of Australian technological innovation.

“I currently chair an Australian ASX-listed biomedical company which is rolling out a large 800 patient trial across three main geographical areas – Australasia, North America and Europe. The product being developed is CVac, a treatment for women with ovarian cancer, which, we hope, will be able to significantly extend the lives, and the quality of the lives of the women with this condition.”

She provided insights into leadership and management: “Management is about how well you can engage, understand and communicate with others – and that depends on nurturing a high level of emotional intelligence and empathy – to be part of the team and at the same time, have the focus and drive to help to lead your organisation in the direction it needs to go.

“One thing I would encourage everyone in this room to think about is this ... always keep an open and curious mind, never stop learning and challenging the way you do things, and the way things are done."

Since completing her MBA in 1984, Turnbull has taken on a range of prominent business and community roles, including becoming the first woman to be elected Lord Mayor of Sydney in 2003.

She has also been active in the not-for-profit sector. Turnbull is Deputy Chair of the Committee for Sydney, Deputy Chair of the Biennale of Sydney and is a board member of the Redfern Foundation.  For many years she chaired the Sydney Children’s Hospital Foundation and the Salvation Army’s Red Shield Appeal . She is a board member of the Australian Technology Park and the Sydney Metropolitan Development Authority.

Turnbull's award citation also noted her contributions to the University, including through the Scientia Appeal in 1998 and as a director of the UNSW Foundation from 2000 to 2004. She is also a member of the Faculty of Medicine’s Dean’s Circle, which was established in 2010 to advise the Faculty on key projects.