Opinion Taken for a costly ride

The benefits of high-speed rail in Australia are illusory, and the scheme stands to be another white elephant, argues Peter Swan. 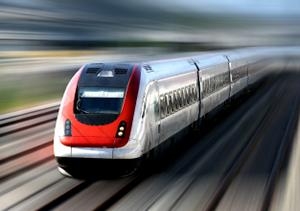 OPINION: Yesterday the Gillard government launched phase two of its high-speed rail study that was produced as part of a political agreement with the Greens.

The very optimistically projected cost is $114 billion for 1800km of rail to link Melbourne and Brisbane via Canberra and Sydney. About 8 per cent of the route requires exceedingly expensive tunnelling, giving huge scope for costs to blow out.

The projected (internal) financial return is 0.8 per cent compared with a minimum of 15 per cent to be considered for a commercial project.

Hence it could never be financially viable and is likely to require ongoing subsidies even if the government provided the entire capital cost.

Can the project be justified in cost-benefit terms? Certainly the report claims there is a positive cost-benefit ratio, with the benefits roughly equal to the costs with a low 7 per cent discount rate.

It is my belief that these benefits are likely to be vanishingly small in practice, with the costs far outweighing the benefits.

The benefits are assumed to arise largely from time savings thanks to better access compared with airports such as Tullamarine. Still, a high-speed rail connection between Tullamarine and the city could be built for less than $114bn with considerable time and convenience savings. There might even be some spare change.

Such assumed time savings also presumably drive the 55 per cent of passengers who are assumed to switch from air to rail and the 19 per cent induced passenger increase.

It is hard to imagine that the 23 per cent of passengers that are assumed to switch from cars will gain sizeable subsidiary benefits to motivate a switch. In fact, many who presently drive will face car rental and other out-of-pocket costs that are likely to be sizeable.

In my view, these passenger estimates are likely to be even more upwardly biased than the pie-in-the-sky estimates that led many toll-road providers to bankruptcy in Sydney and Brisbane. Projected toll-road/tunnel usage exceeded the reality, typically by 100 per cent or more.

At least one would think that private providers taking an equity stake would be cautious in accepting ludicrous estimates of traffic projections. Governments looking for juicy election bribes have no such hip-pocket concerns. All of these failed projections tend to give excessive weight to traveller time-saver benefits.

The first question to ask is: what is a high-speed rail network? It is largely duplication of air passenger routes provided for free by nature. Unlike air routes, high-speed rail is exceedingly capital intensive with an exceedingly long gestation period.

The report projects that cashflow will be positive for the first time by 2060, about 45 years after commencement. One of the few routes that is commercially viable is in major Japanese city pairings with population density about 1000 times higher than major pairings in Australia. Even Japanese bullet trains received a bailout in 1987 and Taiwan's line needed rescuing only two years after commencement.

In China the high-speed network is highly problematic, with severe speed limitations imposed on some lines. One line was even reduced to 45km an hour.

Even in much denser Europe, only a few city pairs are financially viable.

There is no indication that any success will be achieved in North America. The Californian line that commenced in 2008 had spent $630 million within three years without constructing even one kilometre of track.

Thus the benefits of high-speed rail are largely illusory, especially in Australia with its exceptionally low population density and existing network of relatively efficient airports. Removal of curfews could greatly improve airport efficiency, especially in Sydney. Unfortunately, the costs are not illusory and are likely to be massively understated in the report.

There have been quite a few very fast train schemes in Australia, mostly focusing on the Sydney-Canberra-Melbourne corridor. The first one was proposed by the then head of the CSIRO who carried the appropriate handle of "Wild". Hence the "Wild scheme", of which the latest incarnation from the Gillard government is yet another example of an exceedingly white elephant.

It is also well timed as a tempting election bribe, where it joins the Gonski report into school funding, the National Disability Insurance Scheme and numerous other unfunded projects.

Peter Swan is a Professor of Finance in the Australian School of Business, UNSW.