The outspoken comedian and human rights activist was honoured for her service to the performing arts and the social sciences. 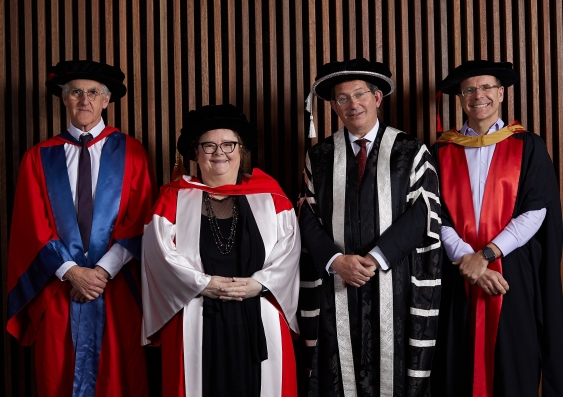 Magda Szubanski was awarded an honorary doctorate from UNSW Sydney on Tuesday for her eminent service to the performing arts and the social sciences.

“Magda is an exceptional Australian who has led as a TV and film actress, author, comedian and human rights campaigner,” UNSW President and Vice-Chancellor Professor Ian Jacobs said. “Her dedication to humility and courage are an inspiration to anyone wanting to make a difference to our society through the arts and activism.”

Ms Szubanski, who quipped she had always wanted to be a doctor – a brain surgeon no less – said the recognition was “up there” with her acting accolades, including AACTAs, Logies and literary awards. She said the honorary degree would mean an exciting ongoing association with the University in which she could learn and contribute her own insights.

“I am enormously honoured to receive this doctorate,” said Ms Szubanksi, who serves as an advisory committee member for the Australian Human Rights Institute at UNSW. “I am really looking forward to working with this eclectic group of people, this interdisciplinary approach.”

A graduate of the arts and social sciences, Ms Szubanski said two actions rooted in the disciplines during her youth shaped her irrevocably – working at a women’s refuge and completing an arts degree at Melbourne University majoring in Philosophy and Fine Art.

“I would say that it was the perfect grounding for a career in comedy as well as the more serious writing and advocacy I have been doing recently,” Ms Szubanski said before the event. “Time and again I find myself going back to texts and influential thinkers that I read more than 30 years ago during that period of study. It laid a foundation that has stood me in very good stead. And now I hope to build on that foundation and support others to do the same.”

During her keynote speech, "Thrown to the Lions: How to survive the cyber marketplace of ideas”, the star of television’s Fast Forward and Kath & Kim shared her experiences at the hands of online bullies and internet trolls.

This year, Ms Szubanski found herself in the middle of the firestorm involving former Wallabies star Israel Folau and his battle with Rugby Australia over a social media post that resulted in his dismissal from the team. Expecting an ongoing legal battle, Mr Folau started a GoFundMe page to raise funds for his legal fees. 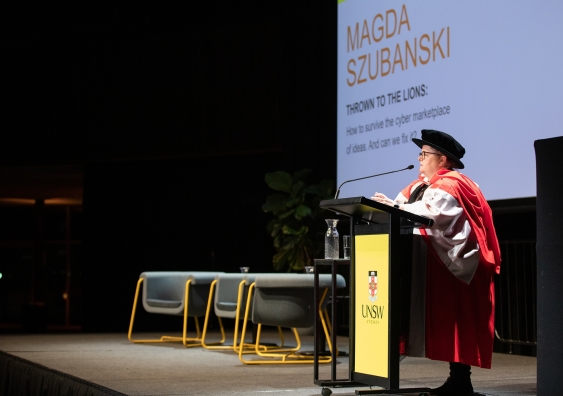 In response to Mr Folau’s fundraising campaign, Ms Szubanski announced a GoFundMe page, “For Love”, benefiting children with cancer. As a result, Ms Szubanski became the victim of a toxic online campaign and anonymous social media attacks. She also weathered online attacks as an outspoken advocate for marriage equality in Australia.

“You may think the title here refers to me being thrown to the lions in terms of the Coliseum that the cyber marketplace of ideas has become,” Ms Szubanski said. “But actually, what has been thrown to the lions is communication, is language, is our ability to speak to one another in a meaningful, honest way where we can actually build trust. Language and communication are the absolute basis of democracy, the basis of civilisation and proper debate and discussion are required always.”

Ms Szubanski encouraged those in the audience to invoke the words of Ernest Hemingway to “write one true sentence”.