The new award, to be presented at the UNSW Blues and Sports Awards Dinner, is named after one of the most significant trailblazers for women’s sport. 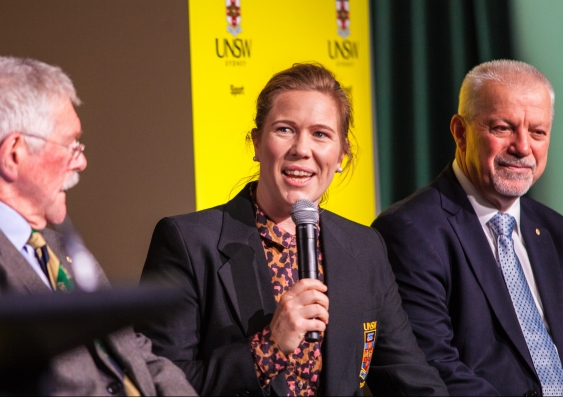 UNSW alumna and Sports Advisory Council member Alex Blackwell is honoured to have the new award named after her. Photo: UNSW Sport

Alex Blackwell has been fighting for change for a long time.

As a cricketer, she has been at the forefront of some of the greatest change the game has seen – change that saw women’s cricket transform from an amateur sport that received little media attention to the juggernaut it is now becoming.

Blackwell has long been motivated by doing what is right, rather than what is easy and it is this quality in particular that inspired the name of the newest award to be presented at the UNSW Blues and Sports Awards Dinner.

The award – which forms part of the UNSW Women in Sport and Active Recreation Strategy – will celebrate members of the community who uphold the values and vision of the strategy.

This can be through advocating for women and girls in sport and active recreation; being a trailblazer for women in the leadership of a sporting club or organisation; coaching or developing programs that have increased women’s participation in sport; or supporting or being a role model for girls and women who want to participate or be involved in sport.

Blackwell is delighted to have the new award named in her honour.

“UNSW has shown great commitment to equity, diversity and inclusion through its sporting programs,” she says.

“The launch of the Active Women Strategy showed a strong dedication to the pursuit of fairness in sport and this new award will be a key part of recognising the champions in our community.

“It’s a great honour to have the award named after me and I look forward to celebrating the first winner of the Alex Blackwell Award in March.” 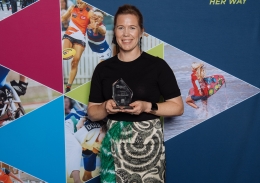 Alex Blackwell was presented with the Trailblazer Award, recognising her important role in fighting for inclusion in sport.

Blackwell is a vocal advocate for LGBTIQ+ people, deciding to come out publicly in 2013 to allow her to more effectively fight to eliminate homophobia in sport.

She also played a key role in the launch of Cricket Australia’s trans and gender diverse inclusion policy in 2019.

In 2018 she became the first woman to be elected on to the board of Cricket NSW in the organisation’s 159-year history and in 2019 she was awarded an honorary doctorate by UNSW for her work in fighting for equality on and off the cricket pitch.

In 2020 she received the Trailblazer award at the NSW Office of Sport's Her Sport Her Way awards, recognising the work she has done in increasing opportunities for participation and leadership for women in sport.

The UNSW Blues and Sports Awards Dinner was not able to be held in 2020 due to COVID-19 restrictions, so the 2021 iteration will celebrate achievements from across 2019 and 2020.

Nominations for the 2020 awards – including the Alex Blackwell Award – are now open and tickets for the event to be held on Friday 12 March 2021 are on sale.