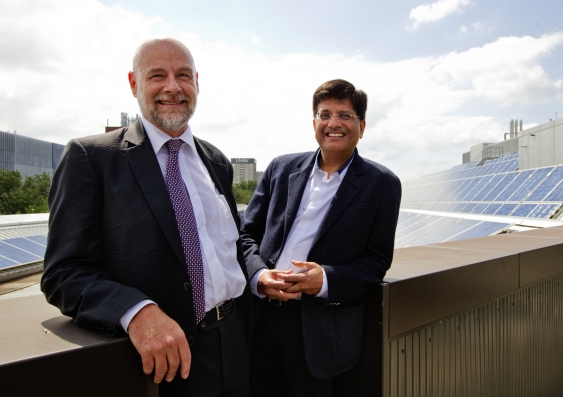 India’s resources minister has called for greater research collaboration with Australia, saying its universities could play a vital role in rolling out low-cost energy solutions to the world’s fastest-growing major economy.

Visiting UNSW this week, Mr Piyush Goyal,India’s Minister for Power, Coal and New and Renewable Energy, said more effective and affordable energy solutions were required, stressing a one-size-fits-all approach would not work in his rapidly modernising nation of 1.2 billion people.

The minister was accompanied by officials from India’s ministries of coal, new and renewable energy, and petroleum and natural gas, as well as a business delegation. All were interested in exploring partnership opportunities with UNSW’s world-leading photovoltaics and resources programs.

That is what the Indian public is demanding – more and more competition, more and more effective solutions that are going to be affordable.

The group toured UNSW’s state-of-the-art Tyree Energy Technologies Building, home to the School of Photovoltaic and Renewable Energy Engineering, and the Indian mining delegates experienced the 360-degree, 3D mine safety-training simulator developed by UNSW’s iCinema Centre and the School of Mining Engineering.

The immersive technology, which has already been rolled out across China, is used to teach mine workers how to survive life-threatening workplace hazards.

The tour was followed by a government and industry roundtable on opportunities for collaboration in the renewable sector, with a broad range of local industries attending to present to and hear from the minister.

Austrade, the Department of Industry and the New South Wales state government were partners in the event.

In order to succeed in the Indian context, Minister Goyal said new technologies had to “scale up” in a way that was affordable when compared with coal-fired energy. 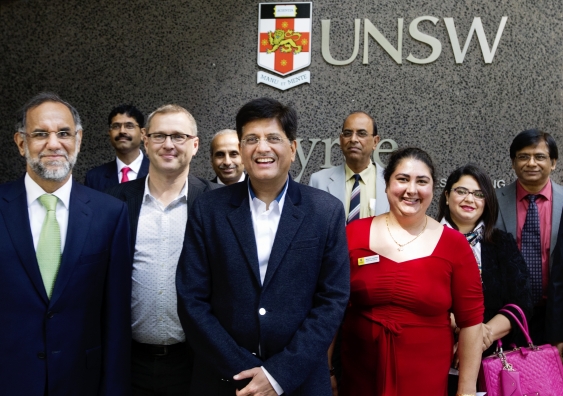 Mr Piyush Goyal, India’s Minister for Power, Coal and New and Renewable Energy (centre) on a ministerial visit to UNSW on February 9, 2016

“We really need to change the thinking and change the viewpoint, making it more focused on competitiveness with thermal power,” he told the roundtable. “Otherwise certainly it’s going to be a challenge in India to sell this.”

“That is what the Indian public is demanding – more and more competition, more and more effective solutions that are going to be affordable.”

The minister said universities would be key to unlocking this challenge.

“I see education as the fulcrum of any greater engagement on a wider horizon,” he said.

“It also starts from people of the two countries getting to know each other better: understanding each other, working together with each other, and I’m sure that universities such as [UNSW] can play a very important role in that.”

Several UNSW researchers presented to the delegates, including Head of the School of Mining Engineering, Paul Hagan, and Professor Darren Bagnall, head of the School of Photovoltaic and Renewable Energy Engineering, who pointed to the University’s unrivalled pedigree on solar cell efficiency. UNSW has held the world record for converting sunlight to electricity in 27 of the last 31 years. 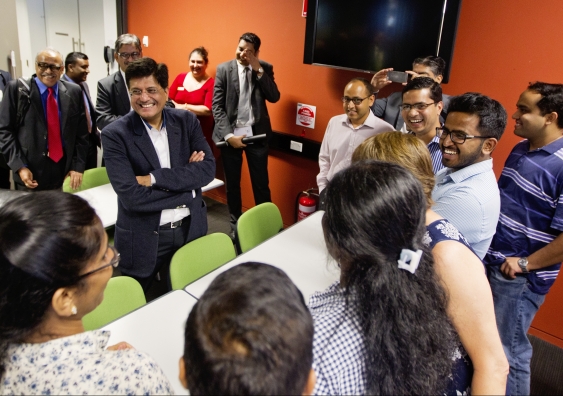 India, which is currently ranked 10th in the world for solar, and targeting 100 gigawatts of solar energy by 2022 with a significant rooftop rollout on the cards, offered significant opportunities in the photovoltaics sector, Minister Goyal said.

“If cost can be made more economical, more viable, if more research is being done in that area, and particularly if manufacture shifts to India it could possibly become more competitive and open up big business opportunities.”

Head of the School for Petroleum Engineering, Professor Klaus Regenauer-Lieb, and colleague Professor Sheik Rahman presented their research that demonstrates the use of microbes to produce methane gas from coal seams, enhancing their productivity.

Minister Goyal said this was a “priority area” in India, which had huge unmet demand for natural gas.

UNSW Vice-President, Advancement, Ms Jennie Lang, said the University had been the “birthplace of the solar revolution” almost four decades ago, establishing itself as a world leader in energy, “particularly in the renewable energy space”.

“When we look at India we can see many exciting things happening,” she said, describing the country as “at the cutting edge of science” and a pioneer in innovation and technology, leading a number of mutually beneficial academic partnerships supported by the Australia-India Strategic Research Fund. 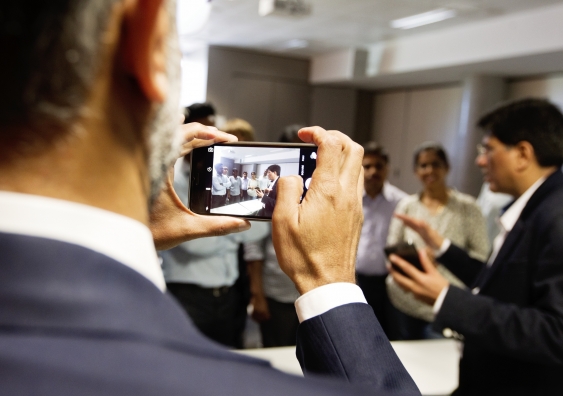 Mr Piyush Goyal,India’s Minister for Power, Coal and New and Renewable Energy, meets with UNSW students from India on a campus visit February 9 2016

His Excellency Mr Navdeep Suri, High Commissioner of India to Australia, said collaboration between resources superpower Australia and sun-blessed India on energy had long been a “marriage waiting to happen”.

“We know that there is much that we can work on,” he said.

UNSW is home to about 400 Indian students, and the Minister thrilled a small group with an impromptu visit, sitting down to chat about life in Australia, joke about Bollywood films and pose for selfies.

“I follow you on Twitter, you’re a superstar in a rockstar [Prime Minister Modi] cabinet,” said one. “I’m a big fan”.